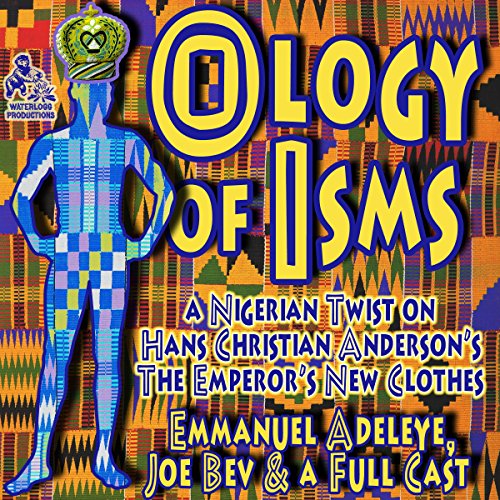 The Ology of Isms

The Ology of Isms is a Nigerian twist on Hans Christian Anderson's classic fairy tale "The Emperor's New Clothes", written by Nigerian playwright Emmanuel Adeleye. This radio theater production is produced by Joe Bevilacqua and features sound effects, music, and a full cast.

Emmanuel Adeleye was born in Nigeria in 1961. After graduating high school, he worked with the Nigerian Television Authority and with the Federation Radio Corporation of Nigeria as a playwright, actor, and artist. He then came to the United States, where he studied theater at Kean College (now Kean University) in Union, New Jersey. In 1981 Adeleye teamed with Joe Bevilacqua to create The Ology of Isms, his first radio play ever presented in the United States. It first aired on WKNJ Radio and later on Sirius-XM Satellite Radio.

Joe Bevilacqua, also known as Joe Bev, is primarily known as a radio theater dramatist. However, his career has taken him into every aspect of show business, including stage, film, and television as a producer, director, writer, actor, and even cartoonist. In 1971 Bevilacqua's father bought him a cassette recorder on which he created his first audio story, Willoughby and the Professor. He acted all the voices himself at the age of 12. In 1975 Daws Butler, the voice of Yogi Bear and many Hanna-Barbera and Jay Ward cartoon characters, dubbed himself Joe Bev's personal mentor after hearing a 120-minute cassette of Bev's Willoughby improvisations. Since 1980 Bevilacqua has produced many award-winning radio programs for National Public Radio, Sirius-XM Satellite Radio, and others.