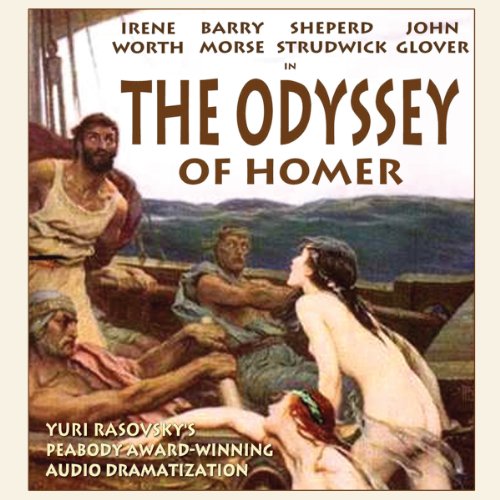 The Odyssey of Homer (Dramatization)

When this groundbreaking serialized dramatization premiered on 320 U.S. radio stations, critics were unanimous in their praise, calling it "a feast for the ears" and "a magnificent blend of scholarship and showmanship." It won numerous honors including the George Foster Peabody Award and the Pulitzer Prize for broadcasting. Never before or since has such an ambitious undertaking been attempted in public radio, and it was accomplished, not by a major network, but by a small nonprofit independent producer in Chicago. That was in 1981. It has been sitting on the shelf ever since.

Now, 22 years after its first airing, Blackstone is pleased to rescue this outstanding production from undeserved obscurity. These recordings have been mastered from unaltered air-checks of the original broadcasts. Here is all the drama, poetry, and excitement of Homer brought to life by skilled actors. For the fullest appreciation and understanding, each of the eight episodes is accompanied by a brief documentary illuminating a key aspect of ancient culture or Homeric art.

This is the story of a man (a hero) who inhabits three worlds: first of all, the world of his own reality (his wife, his son, his home); secondly, the world of myth in which gods and demigods sport and battle; and finally, the world of sorcerers and monsters, of magic and ghosts and unspeakable terrors. The exploration and interweaving of these three worlds contribute significantly to the delight that The Odyssey's audience has experienced throughout the ages.

"The adaptation and writing are superb, the sound effects and music are layered in subtly and effectively, and the fine acting humanizes a challenging classic.... The episodes have a richness that invites a second hearing. The series is a rare and wonderful blend of storytelling, drama, and learning." (AudioFile)

This is a very enjoyable rendition when it is actually telling the story. The cast is great & the audio trick to indicate when a god is speaking through a mortal is neat. The problem is that the original multipart broadcast is presented unedited (as far as I can tell). That means that each episode ends with a preview of next week's episode & the credits. Then the next episode begins with a recap of last week. There are also interuptions to tell you how to get a free study guide (numerous times), and stuff like Ray Bradbury telling you that modern technology is great. There are also places where they pause to explain certain things in the text that might confuse a modern listener & these are welcome.
If this had been edited into one whole presentation, it would be 5 stars easy. But as it is, it is almost too annoying to enjoy.

The gods wreck their vengeance on the listener

Whew! Don't take my word for how bad this is. Just listen to the sample.

The production style is very self-consciously fiftyish, including the "announcer guy" you hear. This sort of reminds me of an academic production, something that would have been performed on a college stage. It's very histrionic. In their attempt at theatricality, the nuanced sensitivity of the Homeric lines are lost. You need absolutely first class actors and a gifted director to pull off something like this. None of those elements are in place here, unfortunately.

While I like it as a "lite" version of the Oddyssey, and the voice acting in the story itself is good - the commercials and interruptions are incredibly annoying - and take up much of the total time of the listen.

This audiobook is a direct translation from the ratio - without the removal of commercials, or, the intro and outro segments of each session. I would guess that at least 10 min of each of the seven segments is wasted time - that is about 70 min of audio that is totally useless to the modern listener.

Would you try another book from Yuri Rasovsky and/or Full Cast?

No. It was difficult to follow the full cast. Many of the voices were annoying.

Listening to a play without watching it. Confusing.annoying.

I found this an easier listen than some audio books. It has music and a varied cast of actors, some of them pretty hammy, but that suits the material. You can get irritated by the all the breaks but overall I really enjoyed it.

This is a excellent retelling of homers tale. This is one of my favourite dramatisations.