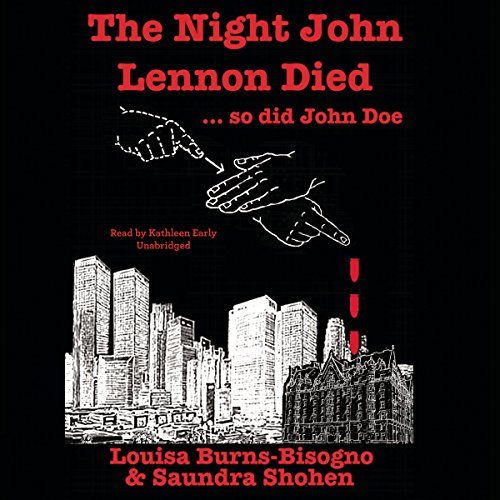 Annie has just started her new job as emergency room administrator at Roosevelt Hospital. In her wildest dreams, she never expects December 8, 1980, to be her baptism by fire when John Lennon's bloodied body is carried into the ER over the shoulder of a policeman. Nor could she anticipate, moments later, the suspicious death of an elderly John Doe. As the old man's frail body is placed next to Lennon's in the morgue van, Annie believes her involvement in these two senseless deaths is over. It is not.

As the media descends - including a cub reporter hell-bent on getting the story of the century - Annie's mettle is put to the test. During the chaotic week that follows, while the details of Lennon's murder develop, Annie becomes profoundly embroiled in the mystery of the old man. With his last ounce of strength he had attempted to communicate with her. When Annie discovers that Doe was deaf and was signing "murder", she feels compelled to investigate. Why would anyone kill a desperately poor, terminally ill, handicapped man?

Coping with her own demons and driven by intense guilt, Annie jeopardizes her hard-earned position as administrator by questioning the ER physician's determination of "accidental death" on Doe's death certificate. As she follows her moral compass deep into Doe's world, she puts her beloved young daughter at risk. As if her days are not challenging enough, sparks fly with a former lover. Even as she bonds with the charge nurse, battles with a weathered NYPD detective, and keeps her worried fiancé at bay, she follows the increasingly dangerous trail to the terrible truth: Both Lennon and Doe's deaths were premeditated murder.

Regret means you can’t go back.

I purchased due to reader as I am a new fan of Ms Early. My fave is Rachel Gibson’s romance, Rescue Me, not be be missed if you like romance and want to see the full talent of Ms Early. She reads Karin Slaughter mystery books which are great, but you must have a very strong stomach. I didn’t sleep for a week after my first Slaughter book! These 2 authors have potential to the start of a decent series. They must get just a bit better editing if they are to succeed. In this story, the byline might be: You can only prove now what you are capable of and not go back to repair the past. Good, will set you free. Do the right thing now even if afraid. I loved all the secondary characters, and this story seemed a bit like chick lit, which I do like, but if authors want the big time, then they will have to bring it up a notch e.g. Marcia Clark’s Samantha Brinkman series, read by my fave Ms Angela Dawe. Note: I do use the new 1.25x speed to best enjoy the authors. Let me know if my comments were helpful to you?