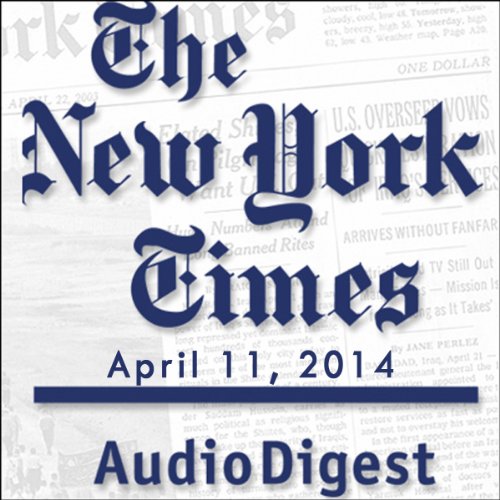 Where does The New York Times Audio Digest, April 11, 2014 rank among all the audiobooks you’ve listened to so far?

I'm reviewing the Digest as a whole, not this particular recording. The New York Times remains a superb newspaper, and the selection of articles for the NYT Digest is excellent. I rank the Digest at the top of the audiobooks I've listened to.

What was one of the most memorable moments of The New York Times Audio Digest, April 11, 2014?

The selected Op-Ed pieces -- always written by a Times columnist -- are my favorite articles.

Who would you have cast as narrator instead of The New York Times?

The long-time narrator of the NYT Digest had for many years butchered the pronunciations of many English words (e.g., aphorism, archivist, mendacious, transnational, fracas, pixel, garrote, modem, and quixotic, just to name a few) geographic locations (Suffolk, Majorca, Serbia, Lourdes, Broward, Myknonos, Kiev, Sahara, Marseille), and names (Zoe, Colombo, Eve Saint Laurent, Medici, Margot, DiNapoli, Richard Lugar, Tom Kean, John Faso, Paris Hilton). While the narrator has much improved his performance in the last few years, he apparently still makes little effort to learn the pronunciation of foreign names and foreign -- or foreign-derived -- words (cognoscenti, kibbitzer, kibbutz, accoutrement, chai, progrom, prosciutto, and many, many others). Why this has embarrassed neither Audible nor The New York Times into action, I have no idea.