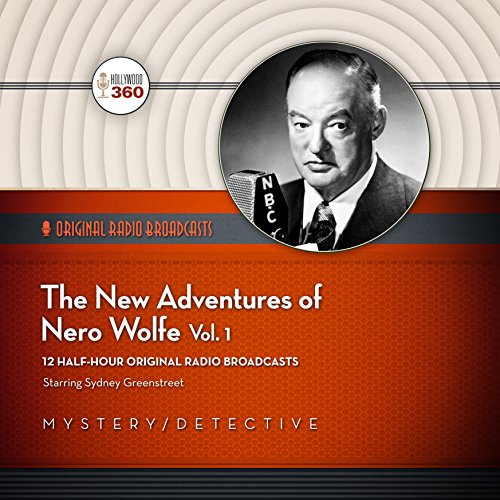 Created in 1934 by American mystery author Rex Stout, Nero Wolfe is one of the most iconic private investigators in crime fiction. As Watson did for Holmes, Archie Goodwin, Wolfe's confidential assistant, narrates the cases of the detective genius. Wolfe was an armchair detective who rarely left his luxurious brownstone in New York, so Archie would collect the facts and report back. Wolfe would probably not have taken on many cases had he not needed his client's money to pay for his two true passions: fine food and his orchid collection.

Nero Wolfe first appeared on radio on July 5, 1943, in a short-lived NBC series starring Santos Ortega as Wolfe, with Luis Van Rooten as Archie. The second series aired during 1945 on the Mutual network and starred Francis X. Bushman, with Elliott Lewis as Archie. The third and most successful incarnation came to radio in 1950. It starred Sydney Greenstreet as Wolfe, with the part of Archie voiced by several actors, including Lawrence Dobkin, Gerald Mohr, and Harry Bartell.

Enjoy 12 of the finest radio episodes of The New Adventures of Nero Wolfe starring Sydney Greenstreet, who is perhaps best known for playing Kasper Gutman, the villain opposite Humphrey Bogart in the film The Maltese Falcon.

Got me through hours of threadmill!

I loved it. I usually have a very hard time running in the gym, but this audiobook got me through it. And I could not stop....listening and running!