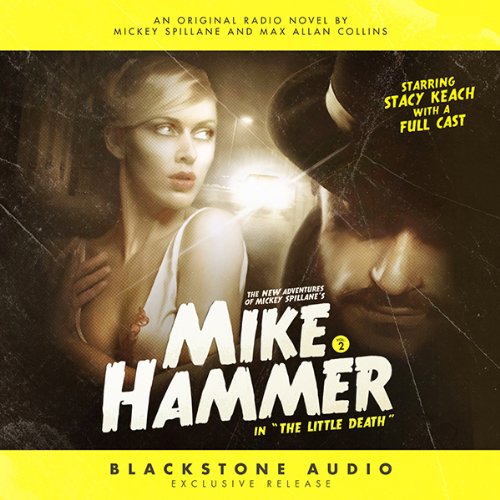 Private eye Mike Hammer is no stranger to murder, but this time he has two to untangle - the killing of the Captain, a legless, homeless panhandler, dismissed by the police as minor, and the slaying of gambling kingpin Marty Wellman, whose lady friend, Helen Venn, turns to the P.I. for help when the Mob fingers her for the next kill. Seems the new kingpin, Carmen Rich - with whom Hammer has a violent history - thinks Helen made off with ten mil in skim money courtesy of her late lover, or anyway, so Rich claims. But Mike Hammer knows a damsel in distress when he sees one and takes up Helen's cause, igniting a series of hit attempts on the P.I. by a small army of out-of-town shooters - some as far out of town as Cuba. Such minor distractions can't prevent the toughest detective of them all from solving two murders and avenging a "little death" in a big way.

Vol. 1 of this Blackstone series was a finalist for the prestigious 2009 Audie® Award for Distinguished Achievement in Production. Here Vol. 2 continues this fully-dramatized "theater-of-the-mind" audio adventure enhanced with sound effects and music.

Few readers are better suited to their characters than Stacy Keach to Mike Hammer. His leathery growl brings Hammer, a private eye who's a relentless psychopath to life--making him almost sympathetic. Best exchange in the book? Something like this:

The Stories are what they are, old fashioned now, with vigilante stabbings and shootings aplenty. Accompanying the Mike Hammer and Velda characters there is always sexual undertone. I enjoyed the wonderful voice of stacy Keach and his rendition of Mike Hammer. It's well worth a listen.

The narration and sound effects made this book a lot of fun to listen to. Stacy Keach did an awsome job.

Cheesy and outdated for a current day story

Almost unbearable to listen to. So cheesy and outdated. Gave up after a half hour.

True to the style of Mike Hammer

Not to be taken too seriously, but this book kept to the genre and was a pleasant listen.

Entertaining On A Long Ride In A Car.

Yes, it is a great mystery.

Yes, when a person is missing like his partner.

What does Stacy Keach bring to the story that you wouldn’t experience if you just read the book?

Love to listen to his voice and pronounced his words so clear.

The many secrets of New York City.

Would you consider the audio edition of The New Adventures of Mickey Spillane's Mike Hammer, Vol. 2 to be better than the print version?

Yes because of Stacy Keach's incredible narration. He brings Mike Hammer to life, and what a life.

On the beach at the finale.

Hey, it's Mike Hammer! Nice way to pass the time on a trip across the state!