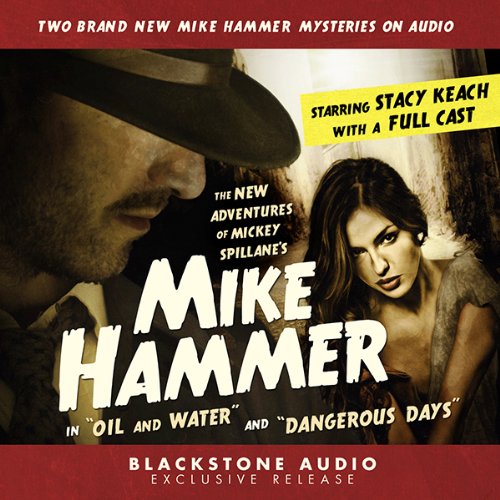 Everybody loves a mystery, and nobody solves them like Mike Hammer. While other detectives bend and manipulate the law, Hammer holds it in total contempt, seeing it as nothing more than an impediment to justice, the one virtue he holds in absolute esteem.

Now, the no-holds-barred private eye returns, along with his gorgeous secretary, Velda, and a collection of New York City characters, in two fully dramatized "theater-of-the-mind" audio adventures: "Dangerous Days" and "Oil and Water."

Narrated by Stacy Keach, the acclaimed actor who starred in the original Mike Hammer television series, these new mysteries are written by the writers of that show and enhanced with a full supporting cast, sound effects, and music. Even the show's jazzy theme song is back to set the gritty tone for each episode.

Great Read... Great storyline... Edge of your seat suspended all the way... I Love it...

Stacy Keach was fantastic. The entire story and acting was as good as it gets

Good narration, typical Mike Hammer. Not too deep, helps pass the time from point to point!

Great to be in Mike Hammer world again.

Yes, it is simple, even cliché, but it is worth the time. As I liked the TV series , this just fit in:-)

What did you love best about The New Adventures of Mickey Spillane's Mike Hammer?

Made it modern day Mike Hammer.

What other book might you compare The New Adventures of Mickey Spillane's Mike Hammer to and why?

The sassy talk reminded me of a few of James Bond books.

I like his voice it was a nice change of pace so clearly said.

Yes it was a book I enjoyed listening to in one sitting!

Dunkin maybe. The beauty of the genre was the reflection of the 30s and 40s. There was a subtly to the characters. They didnt swear, didn’t get raunchy and the ladys may be bad girls but they were redeemable. This modernization did not do well at all; in fact it was embarrassing The ladies were more like hookers and Mike was flat out dumb. Stacy keach should gave known better

Would you listen to The New Adventures of Mickey Spillane's Mike Hammer again? Why?

Probably not. It's not that gripping and too many other books to listen to

It's very tongue in cheek

No. True I was listening while driving but it's not that great

Terrible value at one credit for two and a half hours