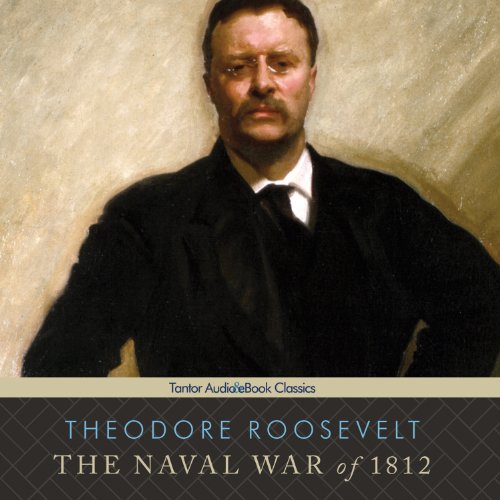 Published when Theodore Roosevelt was only 23 years old, The Naval War of 1812 was immediately hailed as a literary and scholarly triumph, and it is still considered the definitive book on the subject. It caused considerable controversy for its bold refutation of earlier accounts of the war, but its brilliant analysis and balanced tone left critics floundering, changed the course of U.S. military history by renewing interest in our obsolete forces, and set the young author and political hopeful on a path to greatness.

Roosevelt's inimitable style and robust narrative make The Naval War of 1812 enthralling, illuminating, and utterly essential to every armchair historian.

I found this to greatly interesting. I love history- especially American history- and this helped me to fill in some of the gaps in my knowledge.

President Theodore Roosevelt presents an epic and sharply accurate account of the War of 1812 on the high seas against the mighty Royal Navy! I Highly suggest listening to this one!

This is an excellent technical manual of the war of 1812 which gives the exacting details of the navies involved; however, the listener is left wanting for the story of the War of 1812.

Overall I liked the book

The story was very detailed and well written. It was a little hard to follow when reading tables. I did not know much about the War of 1812 but this book peaked my interest especially in the naval captains and Andrew Jackson