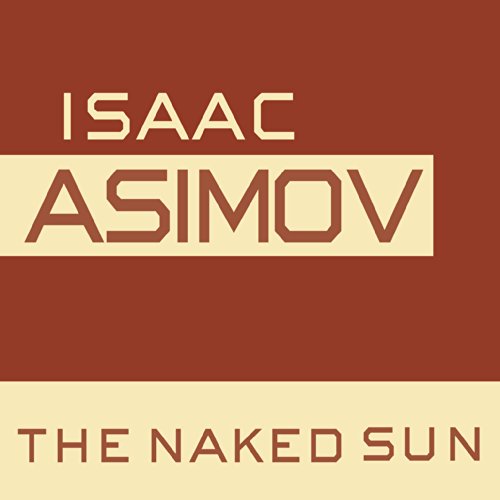 A millennium into the future, two advancements have altered the course of human history: the colonization of the Galaxy and the creation of the positronic brain. On the beautiful Outer World planet of Solaria, a handful of human colonists lead a hermit-like existence, their every need attended to by their faithful robot servants. To this strange and provocative planet comes Detective Elijah Baley, sent from the streets of New York with his positronic partner, the robot R. Daneel Olivaw, to solve an incredible murder that has rocked Solaria to its foundations. The victim had been so reclusive that he appeared to his associates only through holographic projection. Yet someone had gotten close enough to bludgeon him to death while robots looked on. Now Baley and Olivaw are faced with two clear impossibilities: Either the Solarian was killed by one of his robots - unthinkable under the laws of Robotics - or he was killed by the woman who loved him so much that she never came into his presence!

The voice acting is superb. And while many might prefer Scott Brick, Dufris does a wonderful wonderful job with voices His feminine voices are great. The story itself is lovely. And none of the twists I anticipated. Beautiful exploration of fear and isolation.

Would you listen to The Naked Sun again? Why?

I would, but not for a long time. The thing about a good mystery is that once it is solved, and in your head, it is hard to go back.

What was one of the most memorable moments of The Naked Sun?

Getting to hang out with the to lead characters again.

It felt like coming home. The characters were true to form, and like a true sequel to Caves of Steel.

A Bedrock of Modern Sci Fi

Where does The Naked Sun rank among all the audiobooks you’ve listened to so far?

I rank this book very highly. This series was taken off Audible for a few months to correct some audio errors. The series is back, and its spectacular. If you are a fan of modern sci-fi, you owe it to yourself to return to this classic series. It helps to form the foundation of many of the literary conceits common today. Asimov changed our perceptions are the man-machine relationship from Frankenstein to a story about the complexities of life and it works great.

Fundamentally Asimov uses the basis of Kant's logic and weaves it into a detective story. This is somewhat similar to but very different from other stories in the genre. He imbues the characters with humanism and reason to weave a fascinating story that forms the basis for his Galactic Empire and Foundation Series.

Any scene with the the main character(s) and the humanoid(s). I think the clever wordplay is difficult to match in any other author. Finding humanity in the non-human goes beyond personification, its just brilliant.

Asimov is not really that type of author. A common criticism of him is that his characters are not very well developed. Not sure I fully agree, I view them as not having alot of melodramatic emotion. Asimov rarely plays the emotional card. These are books that define logic and complex story telling. I find the entire series the foundation of science fiction and modern literature. Asimov is an under rated author.

Great job audible. I implore you to get the last book in the series, Robots and Empire. I realize there might be copyright issues since it was written much later, but it is an important work in the Robot/Galactic/Foundation story arch.

good story. good narration. this series was a good place to start a long appreciation for Asimov.

Future from the past

Amazing foresight by the author. Can belive his imagination saw so far ahead. Will keep reading his other work.

A little more Robotic Depth, but...

If you could sum up The Naked Sun in three words, what would they be?

The newish angle on the same old robot role. I say newish, as he's playing on an old story in his collection: I, Robot.

Dufris in this collection reads women as morons who are constantly weepy, whiny, irrational upset or angry. I can't say about other collections. It's eye rolling worthy. Otherwise, he's quite good. Different voices, etc.

Asimov is a true legend, but it's sad to see how he writes women most times. This is no exception. Even a prominent Roboticist is irrational, quick to temper. Women are told to "quite down" and talked to like children. I know the argument is, it was his time, but that's BS. He could envision a society living across the galaxy in wildly revolutionary types of cultures, but no women NOT ready to fly off the handle at the slightest provocation. Oh yea, and he can't NOT mention breast size when describing characters.
Of course the "Spacers" have no concept of nudity, and of COURSE it's only the woman character who shows up unclothed...more than once even.

Better than the first book

I enjoyed listening to the narrator more during this book since he didn't have to do the whiny voice of the police chief.
*spoilers* But I am seeing character flaws with Elisia (sp). I hope he doesn't keep allowing the murders to go free.

This is a great follow-up to The Caves of Steel, and further explores the Three Laws of Robotics.

While I found the conspiracy towards the end of the novel to be a little ridiculous, it is still presented and handled well by the author and the narrator.

The narrator did a phenomenal job giving good and memberable voices to each of the characters.

This is my second time to read/listen to this book and I love the story. This is one of my favorite sci-fi murder mysteries, but I absolutely detest the fact that Bailey calls all the robots "boy." It was first published in the 1950's, so it was quite true to the time it was written, but there was no excuse for the way that term was used then and it bothers me to hear it now.

Murder mystery among the extreme shy

The Naked Sun is Isaac Asimov's follow-on novel in his Caves of Steel universe. Earth detective Bailey is called upon to investigate a murder on a spacer world populated by only 20,000 humans but with plenty of robots. The unusual aspect of this world is that every citizen lives an isolated existence having been raised from birth (mostly by robots) to cringe and be unable tolerate the presence of other humans. At the same, Bailey has difficulty with open spaces due to his Earth upbringing. He's also paired with his robot partner from book 1. In his classic New York detective fashion, Bailey takes charge, solves the case, and arrives at many insights regarding earth and spacer lifestyles and their long term viability.

Asimov continues the robot theme with a spacer planet that specializes in specializing robots for every niche. At the same time, there is social engineering designed to condition humans for a solitary existence, supplemented with 'viewing' others as a replacement for direct social interaction. This creates a unique situation where a distinction is drawn between 'seeing' (being someone's physical presence) versus 'viewing' which is an immersive type Skype experience. In this manner, Asimov juxtaposes the two extremes humanity displays and argues for some middle ground.

The narration is well done with good character distinction and solid pacing and mood.