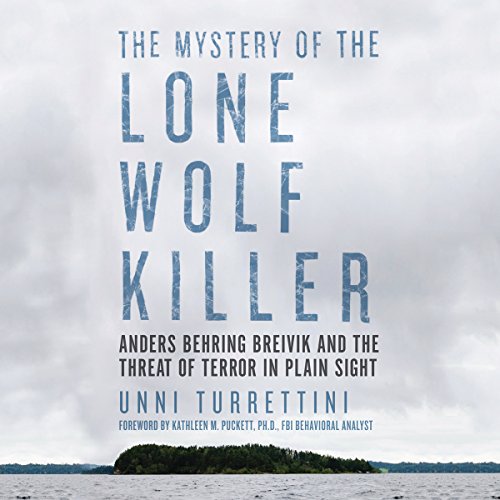 July 22, 2011, was the darkest day in Norway's history since Nazi Germany's invasion. It was 189 minutes of terror - from the moment the bomb exploded outside a government building until Anders Behring Breivik was apprehended by the police at Utoya Island. Breivik murdered 77 people, most of them teenagers and young adults, and wounded hundreds more. Breivik is a "lone wolf killer", often overlooked until they commit their crime. Breivik is also unique as he is the only lone wolf killer in recent history to still be alive and in captivity.

With unparalleled research and a unique international perspective, The Mystery of the Lone Wolf Killer examines the massacre itself and why this lone-killer phenomenon is increasing worldwide. Based on true events.

Well-researched the author gets in depth in the psychological reasoning why this particular mass murderer committed this horrific crime. Also compares to similar mass murderers into the "why" they choose the act and carry out their crimes.

the whole book has some interesting information, i really was interested in the second half.

Good on facts, profiles and Puckett. Lousy due to hate for Norway and gun regulations.

Have to say I was looking forward to this book and came away from it pretty underwhelmed.

The book spends a lot of time comparing the story of Anders Brievik to Timothy Mcveigh (Oklahoma bomber) and Ted Kaczynski ( Unibomber), which is fair enough as they are all known lone wolf killers and the distinction between them and serial killers, school shooters etc is a fair one to make and is interesting to learn and all in all is pretty well handled in this work.

However. The authors handling of the Anders Breivik part of the story for me felt a lot more like a personal attack on Norway and Norwegians. Its political climate, its schooling system, even its entire population comes under attack from the author at an almost constant rate. I'm not Norwegian, I dont live in Norway so i cant claim to be even a layman on Norwegian custom or history but the author basically makes the entire population out to be brainless robotic sheep living in some sort of state controlled shame system. At times it even came across to me that the author somehow believes that Norwegians should be apologetic to Breivik for creating someone like him. Make your point by all means but this wore very thin very quickly.

As far as the actual performance of the audio book goes. The Narration of Mr Cross is very good, the editing however is awful. I dont know how audio books are made and edited but this one seems to be cut and pasted sentence by sentence. It often cuts off halfway through the last word of a sentence and the rejoins on the first word of the new one. Not quite bad enough to make you lose track but far too often to not notice and irritate you.