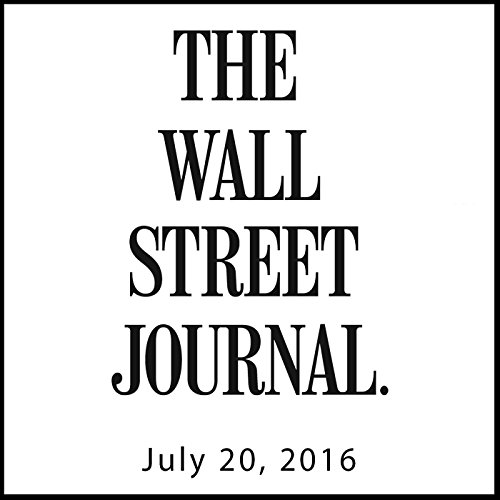 Here's a creative way to make the best use of your morning commute: listen to The Wall Street Journal. Each morning, you'll get the must-hear stories from the Journal's front page, as well as the most popular columns and briefings from Marketplace, Money & Investing, and more. And, every Friday, you'll get a bonus delivery: features, columns, and reviews from the Weekend Journal.
(P) and ©Dow Jones & Company, Inc.

Would you listen to The Morning Read from The Wall Street Journal, July 20, 2016 again? Why?

There was a lot of information in today's read, concerning the MS Cloud, assurances of identity on Twitter, possible re-imposition of (an amended) Glass-Steagall Act, consideration of interest rate rises by the Federal Reserve, the previous night's GOP convention (including the Melania Trump plagiarism kerfuffle and the party's platform), and a great editorial describing what this two-year Congress under Speaker Ryan and Majority Leader McConnell have accomplished. These topics touch on matters important to ordinary Americans (and those seeking to do business in and with US businesses). Pros and cons of various viewpoints were offered.

What was one of the most memorable moments of The Morning Read from The Wall Street Journal, July 20, 2016?

Neither liberal nor conservative media have provided a listing of accomplishments of the 114th Congress of the United States, which is this current two-year congressional cycle. If one asked the average citizen (even a relatively well-informed one) "what has this Congress done?" one would receive the disgusted reply, "Nothing!" This would be wrong. this Congress has accomplished quite a bit, especially when one acknowledges that this Congress lacks a veto-proof majority.

Hooray - a day without a terrorist incident, violent protest, or a shooting of or by police.

Thank you, Audible, for telling narrator Alex that we *don't* need to hear his name. *He* is not the news, just the voice reciting the same. If he wants fame, he should get another job.