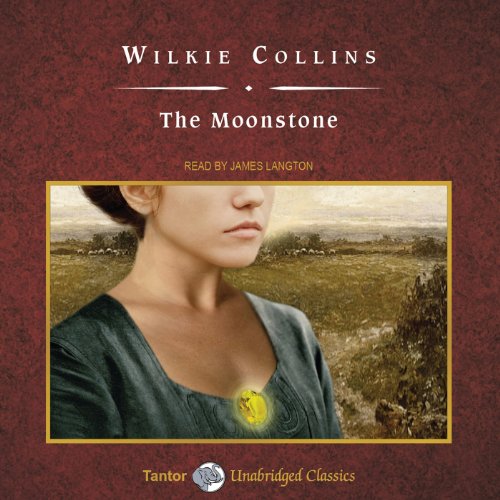 Called "the first and greatest of English detective novels" by T. S. Eliot, Wilkie Collins's The Moonstone is a masterpiece of suspense.

A fabulous yellow diamond becomes the dangerous inheritance of Rachel Verinder. Outside her Yorkshire country house watch the Hindu priests who have waited for many years to reclaim their ancient talisman, looted from the holy city of Somnauth.

When the Moonstone disappears, the case looks simple, but in mid-Victorian England, no one is what they seem, and nothing can be taken for granted. Witnesses, suspects, and detectives each narrate the story in turn. The bemused butler, the love-stricken housemaid, the enigmatic detective Sergeant Cuff, the drug-addicted scientist - each speculate on the mystery as Collins weaves their narratives together.

If you liked The Woman In White...

you will love The Moonstone. Once again, Collins uses his brilliant device of multiple narratives to create a rich, layered story full of complicated and wonderfully drawn characters interacting in complicated and marvelously believable circumstances to bring into being a simply fascinating mystery that compels the reader to go on and on until the end is finally reached. Since it is a mystery, I will not reveal too much of the plot, but simply say that if you love suspense and finely crafted literature, this is a book that you cannot miss--and once you begin, you will not be able to put it down.

What did you love best about The Moonstone [Tantor Audio Edition]?

I loved the narrator. He did a really great job with the distinctive characters' voices.

My favorite part was when the book was describing the religious zeal of one of the characters and how much it annoyed others, unbeknownst to her. It seemed very contemporary in that way!

Oh, I don't know about that. This story isn't something you rush and it is too long for that. But, there were times I wish I didn't have to stop listening.

I got this book only because it was cheap. At first, I was afraid it would be a little boring. However, it really picks up after the prologue. I especially love the parts narrated by the character of Gabriel Betteredge. You really get to know and love (or hate) the various characters in this book. It is interesting to look at the characters through the different interpretations of the each of the narrators. Although there is plenty of mystery surrounding the Moonstone, don't be expecting a fact-paced suspense novel. However, I was glad it took so long to resolve the mystery. It gives time for character development, as well as twists and turns of plot. It was well worth the money.

Very good for its time

This is considered the first mystery/detective novel in English. Written in the second half of the 19th Century, the story and writing is very good for it's time. For most of today's reader I would except it to be too wordy, too detailed and too boring. For me it was not so. I could imagine the audience lining up before the store opened where they could purchase the next installment of the story. It must have been riveting. The language teaches a lot about the customs and culture of that time with great insight into the characters and their thoughts, reflections and assumptions of their station in life. For anyone interested in this period or interested in what popular mysteries evolved from, this is a must read or in this case, listen. The performance was good enough that I wasn't distracted and could easily become emerged in the story but he wasn't as good as the likes of Jim Dale, Simon Prebble or Davina Porter.

I super enjoyed this little mystery. If it had been written today I would have given a 4... but a writer from 1878 holding my attention fully earned my 5. Said to be the first detective mystery... with a little romance on the side. Much like Mr. Collin's "Lady in White" with a slightly less convoluted plot. Male voices more enjoyable than the females... but nice job on narration.

I tried 3 times to get through this book...

It is a little dated and I could not keep awake listening to it. Perhaps have different narrators when the story is told by someone new?

It supposed to be a classic so I wouldn't change anything.

I thought it was too slow but so was the story's pace.

Was The Moonstone [Tantor Audio Edition] worth the listening time?

Not for me. I love a good mystery but could not get interested in this one.

The Moonstone by Wilkie Collins

What did you love best about The Moonstone?

Its quaintness, its prose and its setting. I realise that it is considered to be the first detective novel, but by giving it a notional genre, there is a danger that it will be limited to that in the reader's expectation. It is much, much more than a detective novel. And it is very much a novel of its era. I believe that it was released in serial format initially and it lends itself to this very well. There is a gentle antiquity to it and reading a chapter or two then having an enforced break (while the author writes the next two chapters perhaps!) is a charming way to consume this book. Especially in this world of endless racing and pacing.

No, not on the edge of my seat - it is a mystery but not a thriller. Being set in and written in the 19th century, it reflects that slower epoch.In fact, the plot was unbelievable in these times, but it was a vehicle for the other aspects of the novel, like the writing, the construction and the 'twist in the tail'.

I thought this was an excellent novel for reading aloud. I liked the sound of the narrator's voice and was impressed by his ability to draw the characters in my mind with his changes voice for each one.His pace was good, not too slow so that the story dragged on and on - it is a long book, but not so fast that I felt rushed by the speed of his delvery.Wonderful diction too.

No, I enjoyed listening to it as and when I had time. I liked being able to return to the beginning of chapters if I had been away for a while, or just going back 30 seconds in order to refresh my memory.

If you could sum up The Moonstone in three words, what would they be?

I am so impressed with James Langton's performance with this wonderful book. He helps to give the characters three dimensions and makes them come fully alive. And he delivers Wilkie Collin's excellent sense of humor with such skill. I can't remember enjoying an audio book this much. I would love to see Langton act in person.

I love all of Willie's books this is great

this was all and more than expected
wilkie tells the story through the eyes of all involved. o felt o personally knew each character.

Basically a 19th century detective story, with a limited appearance by a detective. A long yarn but well done, lots of twists and turns. I would give it 3.5 stars if I could - I more than liked it but not a really good book that I would put the 4 stars to (I save the 5 stars for extraordinary books), 3 stars would be too little - those I reserve for a decent reads that are not worth recommending to someone else, or good writing with a poor story...

This was great to listen to . The reading was superb ! I could listen again .