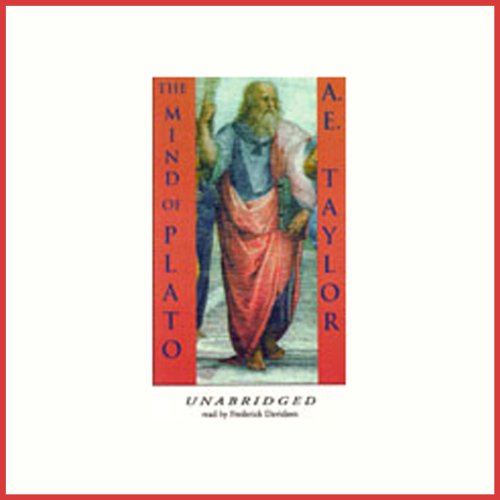 The Mind of Plato

Through his own writings and inspiration of Aristotle and countless others, Plato continues to influence every area of philosophic thought, to say nothing of his enormous influence on Christian theology. His dramatic dialogues, including Republic, the monumental treatise on the ideal state, render him one of the greatest of Greek literary geniuses.
In this concise analysis, eminent Plato scholar A. E. Taylor examines the philosopher's theory of knowledge and doctrine of ideas; the ideal of the philosopher-king; the social system advocated in Republic; judgments on democracy; and belief in the immortality of the soul.
Also considered: Plato's relationship with his master, Socrates; contribution to the idea of university education; attack on art; abstention from public life; anticipation of Copernicus. Taylor also mentions historical misunderstandings of the one he deems the most original and influential of all philosophers.
(P)1993 by Blackstone Audiobooks

Eloquent n remarkably deep for short book. Encouraged me to seek out other classicists of bygone era.

I've listened to many books on ancient history for hours and hours on end but I cannot listen this accent any longer. The information seemed good but the nasally boring monotonous sound of this guy's voice did me in.