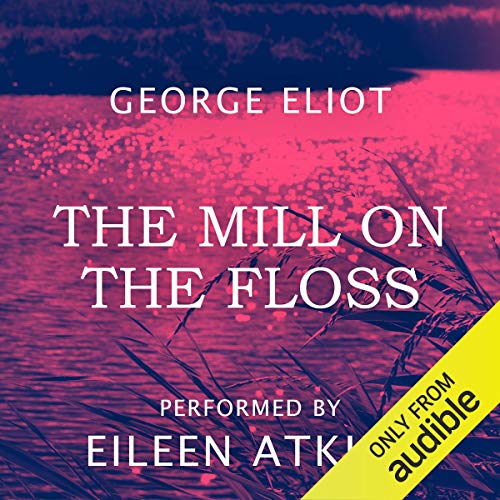 'If life had no love in it, what else was there for Maggie?'

The Mill on the Floss, first published in 1860, is considered one of George Eliot's most autobiographical works.

Having formed a complex bond with her own family, George Eliot, now known to the public as Mary Ann Evans, depicts the loving yet volatile relationship between the Tulliver siblings and their doting father.

Spanning over a period of 10 years, The Mill on the Floss follows the coming of age of the beautiful and idealistic Maggie, as she experiences family tragedy, forbidden love and the wrath of the English patriarchy. A sublime literary accomplishment which brings to question the very essence of what it takes to become a civilised and moral society, Eliot perfects the genre of psychological realism.

George Eliot was one of the leading writers of the Victoria era. Her novels, largely set in provincial England, are well known for their realism and are said to have paved the way for authors such as Henry James. James continued to explore Eliot's revolutionary approach to literature, further introducing the public to a naturalistic genre far removed from the hyperbolic Dickensian narrative that had dominated the 19th century.

Dame Eileen Atkins is an English actress and screenwriter. Her breakthrough performance in the Broadway production of The Killing of Sister George paved the way for an astonishing theatre, film and television career. She is now a BAFTA, Emmy and three-time Olivier Award winner.

Eileen co-created the classic British series, Upstairs, Downstairs, alongside Jean Marsh, in 1971. She has also acted with the Royal Shakespeare Company and been in numerous plays including, The Retreat from Moscow, Medea, A Delicate Balance and Vivat! Vivat Regina!

Cosa pensano gli ascoltatori di The Mill on the Floss

Eileen Atkin gives a profoundly moving, flawless, and deeply intelligent reading of Eliot's great novel. Atkins is not a ventriloquist who tortures out different voices for each character (her men and women have subtly different inflections, but there is no trilling for the girls or hurrumphing for the men -- as there is with some narrators), but nonetheless you always understand the different souls behind each utterance as you overhear this masterful reading. This reading is a close as it gets to a sensitive movement of eyes on a page by a mature reader. One of the five or six greatest novels I have read (to my mind superior to MIDDLEMARCH), and yes Eliot takes some wild chances and, to my mind, gets away with them. Some find the initial part, on the childhood of Maggie, somewhat drawn out -- but give it a chance as her moral consciousness grows.

This is a great novel and Eileen Atkins gives a superb reading of it. She gets the accent and tone exactly right, and she is both moving in the serious sections and hilarious when dealing with the comedy aunts. She also reads at a brisk pace. This is a very polished and engaging audiobook.

Brilliantly composed Audible performance of "The Mill on the Floss" by George Eliot. This is a book which would probably be otherwise inaccessible to my attention if not for the thoroughly elite reading by Dame Eileen Atkins. She performs the entire story with informed, intuitive impersonations of each character, distinguishable with her own unique acting professionalism. I listened to this book consistently during Afternoon Tea and was delighted at how it perfectly fits such an atmosphere and occasion. Such audiobook here is of the highest quality for an authentic British listening experience and socially polite approach to literature. The voice of the narrator is beautiful, with her delectable English brogue and wonderful intonation. A very suitable, first class production for the not engine obsessive and driving addicted fiends, but for higher protocol and fancy.

I was amused and affected.

A-ok. What gifts George Eliot brought to her craft! These characters and their faults and virtues will linger in my mind.

This reading is excellent, with characterization shown through the use of different voices with realistic accents.

in spite of the audio quality loved eileen atkins reading. story was almost great - it took too long to grip but then when it did it was outstanding.

Young Lady Not Of The World

George Eliot writes of a love story, but not of one that you might be use to, for this love story delves in the world of uncertainty and hopelessness. Enjoy, for I did.

One of the great books, a heart breaking tale read by an excellent narrator. Highly recommend.

Narration by the great Eileen Atkins is perfect. She matches the spirit of this great novel. My very best audible listening experience so far and this is saying a lot!

Middlemarch is one of my favorite novels and I just loved Adam Bede when I Audible'd it, but I have to say this one was a disappointment. The reader is fantastic and brings out many of Eliot's amusing touches of dialect and quasi-philosophy. Also, the Victorian feminism expressed is fascinating. Yet for all that the story is really rather aimless, and the ending a real let-down.

Beautifully read. A classic story and well worth the 20 hours or so to listen. I read along and Eileen Atkins brought the words on the page alive.

Eileen Atkins reads superbly. The title of this review says it all, without being a spoiler.

A wonderfully written tale, read perfectly by Eileen Atkins, highly recommended! I didn't think I'd find anyone as good as Prunella Scales as a narrator, but I did!

This is a very compelling classic with the mill being only the central theme rather than the theme of the text which is one of melodrama and female conflict as seen through the eyes of Maggie. She’s good despite herself and causes much agony though none of it intentional. She’s by turns weak and strong, undecided and definite and her brother is much the same. it’s a literary nobel but not any the less interesting if you like victorian melodrama which more than a touch of romance. A word avout the performance though. The accents are not consistent and they ought to be. This is a book about middle class society and the accents ought to reflect that despite the education of the youger ones. However, they do not and that spoils the narrative a bit for me at least.

It may be heretical, but the story is probably George Eliot and Thomas Hardy meeting on a bad day with the inevitale consequence. I loved Silas Marner but with "Mill on the Floss", after the first few chapters of simpering kids, I expected the worst, saw the clouds gathering and bailed out. Eileen Atkins is brilliant, but even she could not swing it.