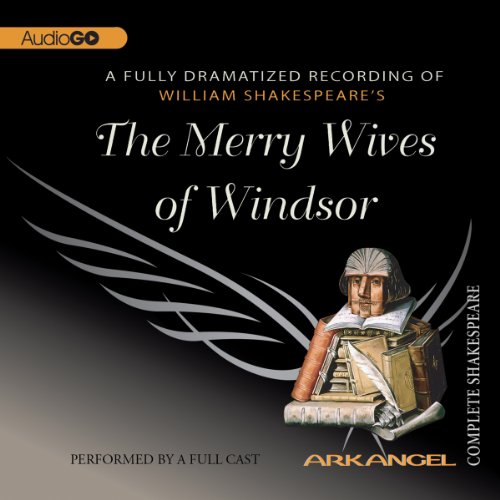 It is said that Queen Elizabeth gave Shakespeare two weeks to write this play that showcases her favorite comedic character, Sir John Falstaff.

The dissolute Falstaff plans to seduce Mistress Ford and Mistress Page, two "Merry Wives of Windsor," there by gaining access to their husbands' wealth. The two women have the old rogue's measure, however, and Falstaff's plots lead only to his own humiliation. But the merry wives themselves fall prey to plotting as their plans to prevent Mistress Page's daughter Anne from marrying the young man she loves are frustrated in their turn.

We have some salt of our youth in us.

Meh. Not my favorite. There were a few good lines and obviously any book with Sir. John Falstaff deserves an extra star (so ⋆⋆ + Falstaff = ⋆⋆⋆). As a whole I didn't like it. It felt cheap and a bit of a throw-away for a mature William Shakespeare, but I'm sure it played well for the dirty and unwashed. And, OK, to be honest there were some pretty fantastic lines. But mostly it felt like it belonged snuggled in a irreverent threesome next to The Comedy of Errors and The Taming of the Shrew. For me it was the Elizabethan equivalent of an Adam Sandler play. Obviously, THAT says as much about ME and my preferences as it does about these plays, but dear God let the pudgy lust and the dirty laundry melt off me tonight.

Here will be an old abusing of God's patience, and the King's English." (Act I, Scene 4)

“I assure thee: setting the attractions of my
good parts aside I have no other charms.” (Act II, Scene 2)

“I think the devil will not have me damned, lest the oil that's in me should set hell on fire.” (Act V, Scene 5)

I loved the background noises and music. The voices were easy to tell the difference between the characters. I followed along in a script as I listened. What a fool Falstaff was. But each character showed their own foolery. And just like them, we each have our own foolish behaviors too. May we learn from their foolishness to not follow that same path.

I loved the lunacy. Just thought Falstaff could have been more . . . Falstaff. Still he was good.

Where does The Merry Wives of Windsor rank among all the audiobooks you’ve listened to so far?

Love that a lesser known play gets the appreciation it deserves.

I enjoyed Meg Page by Penny Downie was my favorite.

At times I did laugh, never did I cry.

I could not stop listening. Great characters, excellent acting, and the music was an added bonus.

Fantastic production of a brilliant play

Through this production I have grown to love Merry Wives of Windsor. Dont go into it expecting Hamlet, but if you are looking for a silly, fun, time you will not be disappointed! Unlike some of Shakespeare's comedies, this play has aged really well and is genuinely very funny, with a message that is very pertinent to modern times: (Wives may be merry, and yet honest too). This production sees all the characters realised very well, and really plays up the humour. I love the Arkangel series. It can do no wrong in my eyes. The fact that all their productions are completely unabridged is a god send for students looking for an accessable way in to Shakespeare.