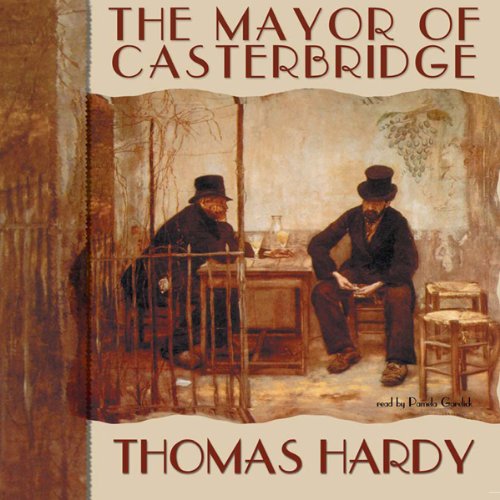 The Mayor of Casterbridge

From its spectacular opening, the astonishing scene in which drunken Michael Henchard sells his wife and daughter to a passing sailor at a country fair, to the breathtaking series of discoveries at its conclusion, The Mayor of Casterbridge claims a unique place among Thomas Hardy's finest and most powerful novels.

Rooted in an actual case of wife-selling in early nineteenth-century England, the story builds into an awesome Sophoclean drama of guilt and revenge, in which the strong, willful Henchard rises to a position of wealth and power, only to achieve a most bitter downfall. Proud, obsessed, ultimately committed to his own destruction, Henchard is, as Albert Guerard has said, "Hardy's Lord Jim...his only tragic hero and one of the greatest tragic heroes in all fiction."

This is my first Hardy novel but it is not going to be the last. When I fist saw Jude the Obscure as a film, I was so taken with it that I could not get it out of my mind for months. It is only upon listening to The Mayor of Casterbridge that I have come to understand that in making Jude, the director Michael Winterbottom) had raw material of an unparalleled literary quality. I love English a written and spoken by 19th C writers. This book does not disappoint in any respect. As someone who has listened to audiobooks for some time now, I found the quality of reading to be excellent. Throughout this long book, there were no moments during which I wished it to be over. The work is slow but its drama effects one directly. I find it hard to listen to a work of this sort without becoming personally invested. I am going to be upset about the book ending because I have taken sides. That's life.

Very well narrated. The woman narrating soes a very good job of bringing out the emotions for male and female characters

This is my second Hardy novel and again I am impressed. Multi-dimensional upredictable characters, a plot with unexpected twists and turns, great use of the English language and lessons to learn about human nature. What more can you ask for from an audiobook novel? Well, you can ask for an excellent narrator who handles various accents well and puts emotion into the story - and you get that too!

The opening three chapters are very enticing - you won't have to listen for 3 disks to be drawn into the story. After having read "Tess of the d'Urbervilles" and loving it, I can say that Hardy ranks up there with the best of the classic novelists. Well worth the listen - great content, great delivery!

I would also highly recommend "Tess . . ". I became literally angry with the characters in the book for what they did. When you get angry with characters, you know the author has done a great job!

This is the first audiobook I have downloaded in the new enhanced format, and I am very impressed with the improved sound quality. As an added plus, the book was very well narrated by Pamela Garelick.

The book itself is nothing short of a masterpiece. A more tangled web of good and evil, of deceit, misunderstandings, miscommunication and bad judgment, would be hard to conceive. Michael Henchard is a tragic figure, who evokes a whole range of emotions in the reader, from repulsion and exasperation to deep sympathy. His act at the outset of the tale, and his recurring temper and jealousy contrast with his iron will to reform and do the right thing, including his vow of abstinence, his secret support of the aged mother of a lowly workman, and his honourable treatment of his creditors. He believes that the fates turn against him, in a Homeric manner, and many readers will find it hard to disagree. His oversized character is in strong contrast with most of the other characters, who (with the exception of Elizabeth-Jane) seem to completely lack empathy. The successful Donald Farfrae in particular seemed remarkably thick-skinned, knowing everything but understanding nothing. This is probably an unfair statement, but he reminds me of the good souls who sail through life unscathed, unconsciously creating havoc, and trailing tragedy in their wake. Henchard at least is human, with massive failings and true virtues which engage our emotions. Hardy has done a fine job with the man, who can take his place at the table with King Lear, Macbeth and other flawed giants of Literature.

I was completely surprised at this classic and it's ability to maintain my interest and provide a very pleasant listen. There was excellent use of language, an interesting and surprising plot (many twists and turns), as well as being a "morality" tale. Never dull.

First I should say that the narrator, Pamela Garelick, helps make this book very enjoyable. Her accents and performance are terrific.

The story starts immediately and moves swiftly, keeping you wondering throughout what will happen next. By the end of the first chapter you will be unable to stop.

The book seems to me to be mostly a character study of the mayor, whose character has some flaws. It would provoke some interesting conversations among Christians regarding sin and repentance.

There are enough twists and turns to the plot to keep you guessing about what will happen next, and the book provides good entertainment all the way through. Thomas Hardy’s prose is written for an accomplished reader, with longer sentences and a more extensive vocabulary than are common today. I had to look a word up occasionally, but reasoned that this was the price to pay for such great writing. There is a reason that this book has remained popular for 120 years.

I enjoyed the book, but it was the top-notch narration by Pamela Garelick that makes it truly excellent. I’ll look for more of her work.

Henchard, Henchard, Henchard - poor Henchard. Is he the villain or a victim of circumstances? Should you feel empathy for him, or does he deserve everything that happens to him? That's the beauty of this book, I think. I read the synopsis and assumed that the book would build up to the sale of the wife, and so when that happened much earlier than I expected, I wondered what else could be left. Boy - was I wrong. This book had so many twists and turns - every time I thought it was going in one direction, it veered off again. Several times I found myself saying, "No, he didn't!" or "No, she didn't!" My feelings about the characters changed time and time again - sometimes I liked them, and sometimes I didn't, or thought they were stupid - there wasn't one "winner" throughout the entire book - but that worked really well!

***I'm spilling some of the beans here, so don't read on if you plan to read the book.*** I was ambivalent about Elizabeth and Donald ending up together. I wanted something nice to happen to Elizabeth, but after the way Donald "dumped" her for Lucetta, I wasn't sure that I wanted him to be the something nice. But I guess Hardy thought he had to write it that way to throw yet another curve ball at Henchard.

I think you should give this a try - it's an interesting foray into the ups and downs of human nature. I definitely liked it and am interested in picking up some more of Hardy's fiction.

This was my first audiobook with Pamela Garelick as the narrator, and I thought she did a great job.

Someone told me once that Thomas Hardy's novels were gloomy, his characters all depressed. The Mayor of Casterbridge casts a bright light on some dear, though flawed, characters and brings them to life right before our eyes...er...ears, I guess. Perhaps Hardy (and others of his 19th century bent) dwell a wee bit much on setting and atmosphere, the long boring parts between the periods of frantic action. But I think not. I'm now reading Far From the Madding Crowd and for my taste in Madding, we may get too large a dose of English country characters chatting at the pub. But...in Casterbridge, Hardy has integrated an accurate, not-the-least-bit-too-much vision of the town and its people with a crackling story of missed opportunities and, as always, the necessity of human accountability, always hard and mostly sad. Self-awareness is in short supply in Casterbridge and, in the end, the least laudable, most conflicted character discovers more of himself than any of the pleasenter folk. As another reviewer observed, the action never lets up in this Hardy story; 'tis a hardy story, 'tis. Read this book. Pamela Garalick's narration is damn spiffy too.

The book really held my attention. Hardy is a great writer. The reading is easy on the ears and clear. Considering the classical nature of this work, the quality, and the length, I highly recommend it.

this was such a lovely story. It was nothing that I expected. The characters were complex and the storyline was very rich.

This masterpiece, with all its twists and turns of narrative, with its characters revealed to us layer by layer, one gripping bit of detail at a time, requires no effort in recommendation. Yet a pleasant surprise awaits the listeners who, like me, were as yet unacquainted with the voice of Pamela Garelick: That velvety voice will, masterfully, wrap you in the ambience of each scene that the only way out of Casterbridge and its surroundings will be to stop the audio playback?you will ?see? the world Hardy depicts and ?meet? its inhabitants and be moved with whatever stirs them, ready or not! Such is the power of Hardy's and Garelick?s arts combined.

What disappointed you about The Mayor of Casterbridge?

The narrator I couldn't bear him especially the Scottish voice he attempted it was awful.

What could Thomas Hardy have done to make this a more enjoyable book for you?

With a good narrator you forget that one person is reading several parts but with a poor one you get to dread certain voices they try as they are so poor.

If you could play editor, what scene or scenes would you have cut from The Mayor of Casterbridge?

Its not so much scenes I would cut as the narrator attempting accents that I would have cut, if not done well they jarr to much and detract from the story.

BOW DOWN TO THE MASTER WRITER AND THE MASTER NARRATER. BRILLIANT WORK & PERFORMANCE! THANK YOU !

A first class reading of a remarkable story. Thomas Hardy at his best. The narrator seems to evoke the mood of the times and I was enthralled from start to finish. Highly recommended