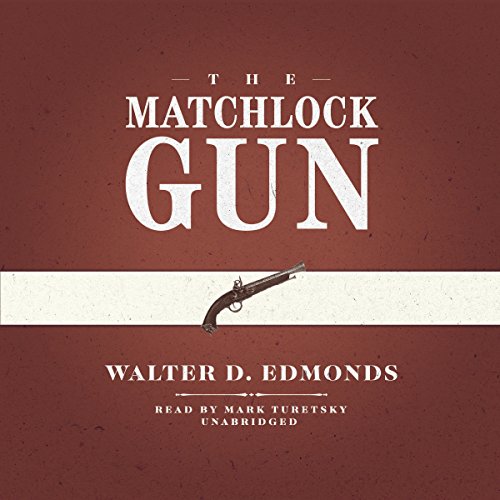 In 1756, New York State was still a British colony, and the French and the Indians were constant threats to young Edward and his family. When his father was called away to watch for a raid from the north, only Edward was left to protect Mama and little Trudy. His father had shown him how to use the huge matchlock gun, an old Spanish gun that was twice as long as he was, but would Edward be able to handle it if trouble actually came?

The voices the narrator used really added to the life of the story, but the story itself pulls you in and makes you thirsty for more.

A little to bloody

I like History, and I liked most of this story, but this was a little violent for me and treated the Indians like animals rather than people. That may be how many saw them, but it is still disturbing. Also it ends pretty abruptly. It was fine for one listen, but I probably won’t have my 7 year old listen to it. He loves books like this but this is too violent.

This was such a quick read. We finished it in two lunch periods. My daughters say it is five stars as does my son. My oldest says it is left open for another story. She also says they could have made the story that the Indians wanted people off their land and not to be killing just because they were murderers. My middle daughter enjoyed the story and wants to know if there is more, a continuation. We own a paperback with illustrations and an Audible audiobook. The narrator was very good with his accent work and it was worthwhile to listen to and we will again. (My oldest daughter already has.)

This is a very good book! Might not be good for younger kids.I recommend that kids under 6 not listen. I liked that it has not swearing or cursing. Good Book!

I think the books are over priced please start making them more affordable Sincerely, Audible user

i didnt enjoy this short and boring book.too much violance.I didn't enjoy this.I will not listen to more books by this auther.

It was awesome stupendously awesome actually