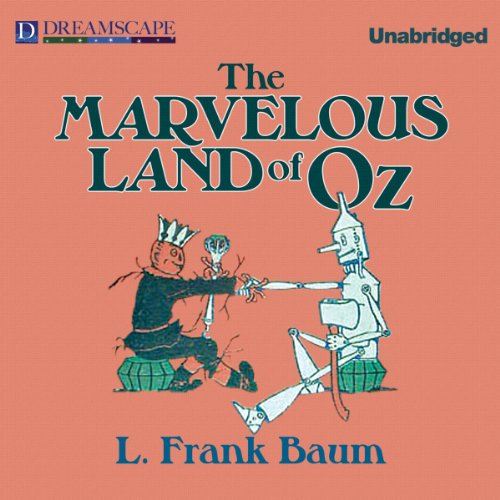 The first of many sequels to The Wonderful Wizard of Oz follows Tip, who is escaping from the sorceress Mombi. On his way to the Emerald City, hoping to start a new life, he creates Jack Pumpkinhead and the Wooden Sawhorse. Once the companions arrive in the Emerald City, they discover an army of girls have overthrown King Scarecrow.

Joining with Scarecrow, they set off to find Tin Man, and ask Glinda for help setting things right. But first, Tip must find out who he is, they must defeat Mombi, and there is the small question of who rightfully should rule Oz....

I'd read The Wonderful Wizard of Oz (1900) several times and had watched the Wizard of Oz (1939) movie countless times, but, assuming that the other Oz books by L. Frank Baum were pale iterations of the first, I'd never read any of them. When I finally read the second book, The Marvelous Land of Oz (1904), I found it to be delightful from start to finish, at least as imaginative and much funnier than the famous first.

The sequel begins when an orphan boy named Tip living with a wicked witch named Mombi makes a man by carving a grinning face into a pumpkin, sticking it onto a wooden frame, dressing it in old clothes, and naming it Jack Pumpkinhead. When Mombi brings Jack to life with her Powder of Life so she can replace Tip with him (planning to turn the boy into a marble statue), Tip escapes with Jack and heads for the Emerald City. The ensuing episodic adventure story features travels across and even out of Oz, battles in and around the Emerald City, reversals of fortune, plenty of magic, and a cast of "unusual" characters. In addition to the "rugged" Tip, the "eternally smiling" Jack (so fearful that his pumpkin head will spoil or be eaten), and the crafty Mombi, we meet the stiff-legged Saw-Horse with an attitude (don't tell him he's "a little hoarse"), General Jinjur, a girl who likes sweets and jewels and dislikes chores and men in charge, Mr. H. M. Woggle-Bug, T. E., a man-sized, well-dressed insect with an incontinent fondness for puns (if he were to ride the Saw-Horse, it would become "a horse and buggy"), and the "conglomerate personality" flying sofa Gump with an aversion to life in an "upholstered condition of servitude." Old friends from the first novel reappear as well: the Scarecrow, whose sharp brains seem to have dulled under the heavy weight of the crown of the Emerald City, and the Tin Woodman, whose tender heart has made him a vain dandy with a fondness for polishing his nickel-plating and being the emperor of a small kingdom.

About the audiobook version read by Tara Sands, she speaks clearly, pauses and emphasizes appropriately, keeps things moving along crisply, and appealingly does a boyish Tip, gruff Saw-Horse, simple Jack, and high pitched Queen of the Mice. However, her Mombi sounds too dignified, her Guardian of the Gate has an odd pseudo British accent, and her narrator is a touch too syrupy (presumably for kids).

The novel is full of comical scenes, like when Jack and the Scarecrow meet for the first time and mistakenly believe that they need an interpreter to communicate with each other, or like when the Scarecrow gets a new stuffing, making him the most "valuable" companion. It is also full of fantastic scenes, like the Woggle-Bug's story of how he came to be H. E. ("highly magnified") and T. E. ("thoroughly educated") and the Saw-Horse's idea for counting to seventeen by twos. And it sports many funny conversations, some of which achieve a nonsensical philosophical truth about identity and life reminiscent of the Alice books by Lewis Carroll.

"What are you, a man or a pumpkin?" [the Guardian of the Gate] asked, politely.
"Both, if you please," answered Jack.

"Why, dear father, did you not make me out of tin--or even out of straw--so that I would keep indefinitely."
"Shucks!" returned Tip, indignantly. "You ought to be glad that I made you at all." Then he added, reflectively, "Everything has to come to an end, some time."

"I am convinced that the only people worthy of consideration in this world are the unusual ones. For the common folks are like the leaves of a tree, and live and die unnoticed."

"To 'Know Thyself' is considered quite an accomplishment, which it has taken us, who are your elders, months to perfect."

The Marvelous Land of Oz also features more language humor than the first book, as in all the puns and in conversations like this:

"But where was my Standing Army at the time?" inquired his Majesty, looking at the soldier, gravely.
"Your Standing Army was running," answered the fellow, honestly; "for no man could face the terrible weapons [knitting needles!] of the invaders."

In addition to all those virtues, Baum champions the unusual, encourages us to accept each other's flaws, and plays interestingly with gender, especially for 1904. Although Tip’s party is all-male, all the powerful characters in the book are female: Mombi, Glinda, Jinjur, and the Queen of the Mice. (To avoid spoiling a provocative surprise, I won't mention the biggest gender feature of the novel.) In conclusion, fans of the first novel or of the movie would enjoy The Marvelous Land of Oz, and I'm looking forward to reading the other Oz books.

The Marvelous Land of Oz is the first of L. Frank Baum’s fourteen sequels to his much more famous novel, The Wonderful Wizard of Oz. Each of the sequels, which were published form 1904 to 1920, are illustrated by John R. Neill and are now in the public domain. My 11 year old daughter and I listened to a delightful audio version of The Marvelous Land of Oz which was read by Tara Sands. I purchased this version for free at Amazon and added Tara Sands’ wonderful narration for $2.99 with the Amazon/Audible Whispersync deal.

In The Marvelous Land of Oz, an orphan boy named Tip is being raised by an evil witch named Mombi. One day Tip tries to frighten Mombi by making a pumpkin-headed stick man and placing it on the road where Mombi will pass on her way home. Instead of being scared, Mombi animates the pumpkin-headed man with the magical Powder of Life which she has just illegally procured. When she threatens to turn Tip into a statue, Tip and the pumpkin-headed man (now named Jack) flee with the Powder of Life. They animate a wooden sawhorse and set off for the Emerald City which has been run by the Scarecrow since Dorothy and the Wizard left.

When they get to the Emerald City, a coup attempt is in progress. The Scarecrow’s throne is being usurped by a nasty little girl named Jinjur and her gang of girls wielding knitting needles. Tip and Jack want to help the Scarecrow get his throne back, so they all set out to get help from the Tinman, Glinda the Good Witch, and others (but not Dorothy — she’s still in Kansas). Can they get the Scarecrow’s throne back before the pumpkin head spoils?

The Marvelous Land of Oz is a creative and fun story in its own right, and it can definitely stand alone, but fans of Baum’s original OZ story are sure to relish revisiting the land of Oz and its strange but familiar characters. Beside those we already know, readers will meet a few new endearing heroes who I hope we’ll see again in the remaining sequels. My favorite was the Highly Magnified Bug who insists that making puns is a sign of genius.

The story is not all silly laughs — there are actually some thoughtful bits, too. For example, the characters wonder whether Scarecrow is justified in fighting for his throne when it didn’t legally belong to him in the first place. It had been stolen by the Wizard.

Both my daughter and I thoroughly enjoyed The Marvelous Land of Oz and plan to read the next book, Ozma of Oz.

The narration is like listening to an 10 year old boy but it's a girl. Very distracting and takes away from the actual story. The story was fine.