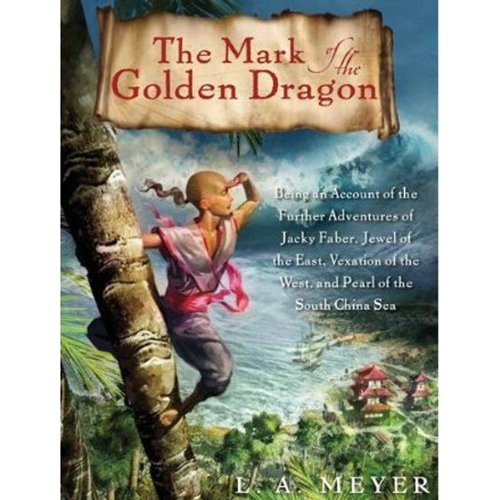 The Mark of the Golden Dragon

The irrepressible Jacky Faber, condemned for life to the English penal colony in Australia for crimes against the Crown, has once again wriggled out of the grasp of British authorities. Back on her flagship, the Lorelei Lee, she eagerly heads back to England in the company of friends and her beloved Jaimy Fletcher.But when the voyage is waylaid by pirates, storms, and her own impetuous nature, Jacky is cast into a world of danger that extends from the South China Sea to the equally treacherous waters of London politics. With the help of her friends, Jacky meets her enemies head on in this tale of love, courage, and redemption.

LA Meyer received a master of fine arts from Boston University, and is currently the curator and exhibitor at the Clair de Loon Gallery in Bar Harbor, Maine. He lives in Corea, Maine.

Katy Kellgren has recorded over 100 audiobooks including the Bloody Jack series which he won multiple Audie Awards and Odyssey Honor Awards. She has appeared on stage in London, New York, and Frankfurt. She is a graduate of The London Academy of Music and Dramatic Art.

A Transitional Tale for Faber & Co.

First, let me say that I am a massive, massive fan of this series, and as long as Mr. Meyer keeps writing them, and Ms. Kellgren keeps performing them, I will keep listening.

That being said, this one could have been better. I finished listening to this last night, and find myself feeling a bit unsatisfied, and a bit disappointed in our heroine. Those who enjoyed the increased involvement and "piratization" of Mr. James Emerson Fletcher in Wake of the Lorelei Lee will be disappointed here. Jaimy hardly appears at all, due to certain circumstances which I won't elaborate on. Despite these circumstances, I don't understand why we could not still have gotten some narration from his point of view.

Also absent in this volume is Joseph Jared, who reappeared in rather dramatic fashion at the end of WotLL, so the Jacky/Jaimy/Jared love triangle conflict that fans may have expected never really materializes. Instead, another of Jacky's former paramours takes center stage in this book, and the bulk of the plot involves much gallivanting around London. I agree with Davey and Tink (those stallwart members of the Dread Brotherhood of the Dolphin) that Jacky should have been more focused on the Jaimy situation. Oh, how I longed to see Jacky and Jaimy having adventures together for once.

Complaints aside, this is still an enjoyable audiobook. Katy Kellgren continues to dazzle, and there is now a pretty nice setup for the next book, "Over the Hills and Far Away." I will choose to think of this as the transitional book needed to wrap up the "Transported for Life" storyline so that Jacky can get back to action in the next book. Just don't go into this expecting an epic adventure on the scale of Lorelei Lee, Bonny Light Horseman or Jolly Roger.

Though I do take a break from the Bloody Jack series occasionally, I love coming back to it. The narration is spot on, I cannot imagine anyone else performing better! As always the story moves swiftly, and I was glad to see a friend of Jackie's finally call her out for playing so fast and loose with her feelings. Though the story line of Jackie and Jaime always leaves them just out of reach of each other, I can see there is a method to the madness. Highly recommend!

Like others, I have been a fan since the beginning; but enough is enough. It's time for this series to go away. Every successive book in this series becomes more and more like a bad romance novel. Repetitive and irritating. Even Ms. Kellgren, who's performances on these books has been second-to-none appears to have become bored with the material. This series like so many others, literary or otherwise, that have outstayed their welcome (i.e., the Saw movies, Stephanie Plum, M.A.S.H. & Friends), should have ended long before now. And why James Fletcher would continue to waste his ENTIRE life chasing after a character who one minute seems to be totally devoted to him and the next whore's it up with every guy who shows an interest in her is beyond me. Here's hoping that #10 will be the last book in this series (an even number is a good number to end on -- too bad it wasn't number four). I gave this an overall 3 stars only because of Katherine Kellgren, not for the idiotic story.

Normally, if I want to listen to a hundred plus hours of audio I would have to download Les Miserables or some other painfully verbose semi ancient classical work -- or download The Game of Thrones books. It seems like the longest audioworks are also really dark with a lot of death. It can be hard to find happy, uplifting, enjoyable well-crafted content that is also long, immersive and well-produced. This series is an absolute delight because of the multiple languages and the exquisite singing by the narrator. I find myself humming sailor shanties and having learned how to sing the Rocky Road to Dublin! I use the audible book marking function to bookmark and play my favorite songs.

I have been brought a lot of joy by the series, it has light-hearted content but it's still complex enough and historically steeped for an adult to enjoy... even though it appears to have been written for a young adult audience.

I found this book in the series particularly fun because of the total reversal of 1800s Romanticism literature. Instead of the weak-willed woman going mad over something emotional because her sex is flawed, it is the strong quick to anger well-bred male character who loses his marbles and has to be redeemed by the frisky sixteen-year-old girl with a handsome man on each knee.

Another One Hit Out of the Part!

Everytime I read another Bloody Jack book, I wish with all my heart that L.A Meyer was still with us. These books are some of the best I have ever read -- and I have certainly read my share. To think that there will be no more from his hand is heartbreaking indeed. This one was top notch reading indeed!

I rarely find a book that warrants giving it five stars, but if possible I would give it 10! By George, I think I just did...

it's the adventures I wish I had had. so entertaining and full of life. the Narain is sheer perfection and the story oh so entertaining. this is a winning combination. I hope this series never stops.

I see some people commented that Jackie gets in similar predicaments over and over. That's the point of a series, especially one for young people. In what new way can she be almost killed/lost at sea/tempted by a charming young man who is not her fiancé, etc?

Something I noticed in this book that hasn't been so obvious before is the link to literary and historical references. We hear about Lord Byron, Coleridge and Dolly Madison. Also readers of this book are going to be surprised when their middle school English teacher has them read the poem The Highwayman and Jaimy doesn't figure in it.

As always, it is the narration by Katherine Kellgren that makes this an outstanding series.

I loved the series. This is the type of book that is better listened to versus read because the narrator takes the story to the next level. Best narrator I have ever heard. The narrator of an audiobook can really help or hurt the book. This narrator helped the series.

I took a bit of a break from this series because I was a tad afraid to pick it up based on the other reviews. Now that book 10 is out I decided to give it a try.

As others have said this is a transitional tale, Jacky has a few escapades abroad and then is back in London to clear her name. Once again surviving only due to her friends and relationships that she has built over the last few books.

Unlike the other reviewers, I enjoyed this book and thought it worth my time. The adventures back in London got a bit slow as she just seemed to enjoy playing around with her flirts, and nothing really ever happened. Then it ended on an odd note, so I look forward to starting book 10!

What did you love best about The Mark of the Golden Dragon?

Same old Jacky always getting into new troubles and adventures. I enjoy all the exotic locales and people.

Would you be willing to try another book from L. A. Meyer? Why or why not?

This has been a great series. I would always get another book from L. A. Meyer, but I think you can only drag out unresolved issues for so long before they become cumbersome. It's about time for Jacky to give up on Jaimy or commit to him. It has now dragged on for nine books. Characters need to evolve over time and I think Jacky has become a little stagnant.

Which character ??? as performed by Katherine Kellgren ??? was your favorite?

I enjoyed Ravi and all his laments about what he was going to come back as in the next life.

I think the scene where Davy is chastising Jacky for her behavior when they should be trying to help Jaimy. She initially becomes defensive and declares nobody is going to tell her how to live her life. That is spot on for her character, but I beleive the criticism may have hit home a little and given her something to think on.

To sum up I love the series but feel it's time for Jacky to do a little growing up and make some hard decisions about her life. To string Jaimy along for nine books is getting a little tiresome and what once was charming about her character now seems callous.