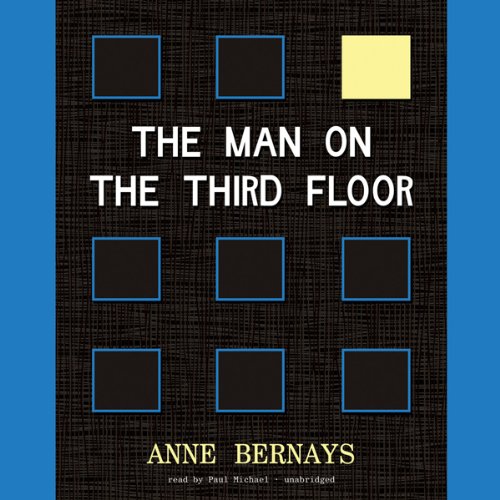 The Man on the Third Floor

Walter Samson is a successful book editor in post-World War II New York. He has more than enough money, an interesting wife, two smart children, and reason to believe he’s leading the good American life - until a chance meeting with Barry Rogers. Barry is blue-collar, handsome, single, and poor.

Walter is instantly drawn to Barry, and despite the considerable risks, installs him in the Samson’s three-story house on the Upper East Side, where the two men try to keep their amorous relationship secret.

Against a backdrop of McCarthy-era fear, with its doleful consequences and with society’s pervasive homophobia, Walter manages to alter the direction and course of his life, losing much but gaining more.

Anne Bernays is the author of over a dozen books, including Growing up Rich. Her writing has appeared in the Nation and The New York Times, among others.

©2012 Anne Bernays (P)2012 Blackstone Audio
Narrativa letteraria
Mostra di più Mostra meno
“It’s what Edith Wharton or Louis Auchincloss might have written had they been free to write about a middle-aged and apparently happy man who finds himself falling in love with another man.” (Michael Korda)
|“I just love this book. It’s my favorite of all her books by light-years.” (Annie Dillard, Pulitzer Prize–winning author)
"Bernays deftly articulates the difficulties faced by homosexuals during the McCarthy witch-hunt years…[She] explores a dramatic era in American history and the psyches of her characters with equal ease in this well-written and entertaining new novel." ( Publishers Weekly)

This is an overall interesting book - different from others I’d read. As it takes place in a different time, I felt myself hosting a lot of judgements that may not be fair.

I’m finding a disturbing and difficult pattern in some of the “escape” (romance) books. The first being - anything that falls into sexual assault makes me uncomfortable with a “romance” label. Anything that has an assault on a child for sure kicks that FAR out of “romance.”

I really don’t know if it’s fair to classify this as a romance. It is, and isn’t. It’s more about “people” as they navigate a time before Stonewall and Pride parades, and so men having secret affairs - while realistic - I don’t find “romantic.” The other family members and the struggles make me to sad to feel whims of “romance.”

The story drew me in.
Narrator was excellent.
This book was very entertaining from start to finish.

I did not enjoy this title. Stilted, Passages border on being antisemetic. Not for me.

This is an excellent book. The writing is absolutely exquisite, and the narration is perfect! I was actually sad when it was over. I loved everything about it and I highly recommend it.

no retribution for being gay

I loved this book, pretty realistic, and Walter was not punished for being who he was.

I liked the bromance and all the many details of the times in which they lived. It was very real.