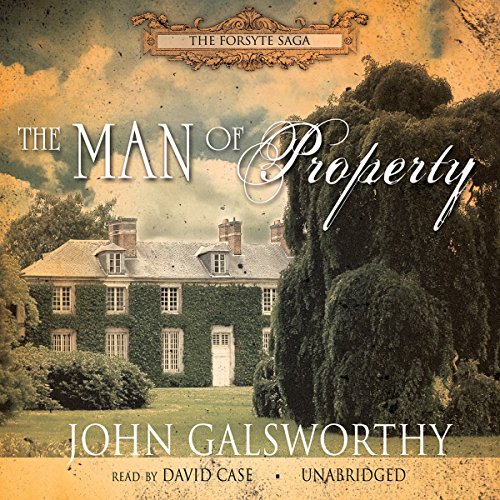 The Man of Property

The Man of Property, the first novel in John Galsworthy's epic social satire The Forsyte Saga, introduces us to Soames Forsyte, a London solicitor and prominent man of his important family. Accustomed to getting whatever he wants, he sets his sights with absolute determination on the beautiful Irene in spite of her pennilessness and indifference to him. Irene, a lover of art and beauty, eventually accepts his marriage proposal over a life of degraded poverty, but she swears to Soames that she will never be his property. When all his money fails to make up for the absence of love and Irene falls for a young architect, Soames resolves to force the obedience he could not buy.

Galsworthy won the Nobel Prize in Literature in 1932 "for his distinguished art of narration, which takes its highest form in The Forsyte Saga".

... for this masterpiece of writing and narration. Galsworthy's tender, wicked irony is perfectly captured and conveyed by David Case, who is THE master among book readers. Each character has his or her distinctive voice which perfectly expresses the personality Galsworthy intended. The richness of the relationships, the vivid social commentary, the HUMOR, are indeed Nobel Prize material.

I'm now listening to the whole series of nine novels for the third time, and the experience is as rich this time as it was the first. It's more than just fiction. It's a poem, an opera, a feast.

A tale of epic proportions

I was first introduced to the Forsyte Sage through the 1960s BBC TV adaptation. This audiobook brings it all flooding back. A wonderful portrayal of late Victorian & Edwardian England. It is true that the opening chapters introduce a vast cast of characters, but the tale settles down and they disentangle themselves with skilled assistance of the narrator who is able to play each character quite distinctly. Highly recommended.

I've been meaning to read The Forsyte Saga for years, having enjoyed both TV dramatizations (1967 and 2002). And even though I know the story, I very much enjoyed this first book in the saga. Galsworthy gives us a lush, detailed view of late Victorian England's upper middle class and their mania for property and respectability. Like every family, the Forsytes have their secrets and black sheep, and that makes them all the more intriguing. The focus here is the ramrod-spined solicitor Soames and his unhappy wife, Irene. Soames had courted Irene more for her beauty than for love, treating her like one of his exquisite objéts d'art. So determined was he to have her that he promised to let her go if she wanted her freedom. And here lies the crux of the story: Irene is dreadfully unhappy, yet Soames refuses to let her go.

Galsworthy has created a cast of one-of-a-kind characters (or if they now seem like sterotypes, they were one-of-a-kind when first created). There are the senior Forsytes, Old Jolyon, James, Roger, and the aunts; the "black sheep," Young Jolyon, who married beneath him and was cut off by his father; Winifred, married to the alcoholic bounder Monty D'Arty; June, Young Jolyon's philanthropic daughter from a first marriage, and her dashing architect fiancé, Philip Bossiney, secretly dubbed by the family "The Buccaneer"; and many, many more.

There's a reason why Galsworthy's novels were so popular--and why not one but two dramatizations have been made. Quite simply, The Forsyte Saga is a jolly good story. I'm looking forward to moving on to the next six books in the saga.

David Case's voice would might start to grate on my ears--except that it has the perfect haughtiness for these stories.

I have been slowly going down the list of books that won the noble prize for literature (English Language) and reading them. I was amazed at how many I had already read. This book won the 1932 noble prize, written by an Englishman John Galsworthy. The Forsyte saga is, I think, nine volumes long. This series is about the ebbing social power of the commercial upper middle class Forsyte family between 1886 to 1920 England. The story is deeply moving, funny, infuriating and compelling. It covers a multi-generation dysfunctional family with Soames Forsyte the key protagonist. Galsworthy's masterly narrative examines not only the family but the wider developments within society, particularly the changing position of women. The industrial revolution and changes in transportation come through in the story. There were times I felt l was listening to poetry as Galsworthys' beautiful descriptive words rhythmically flowed. David Case did a good job narrating the book.

all that is human

The Forsyth Saga is so complete, so thorough, so human. Each character is someone with a distinct identity that still resonates with a believable individuality. Even with the weight of so much social and moral complexity (the human condition in the specific), Galsworthy is entertaining, comic and tells a ceaselessly engrossing story. What a master; to maintain all the varying hues and colors of this story of human lives in bathos and in trivia, and weave a cloth that is delightful to behold! I love this great work of nine novels, beautifully interconnected and endlessly full of interest and wisdom. Real them all!

I thought this book was boring. The only thing that got me through it was the reader David Case who was excellent. I could listen to him read anything.

I know this is supposed to be a great series and it is well reviewed by others but I just can't get into this book! I've endured 9 chapters and now I'm just giving up.
The book starts out with SO many characters that I have trouble keeping track of who is who in this family tree. Perhaps it would be better to read the book so that I could go back and review the characters? The reader is very good at emulating all of the different voices but there are just too many characters and details for me to keep things straight. Very little has happened in the plot and I have had to re-listen to much of the book so far just to figure out who everyone is and what is going on.

A classic work of capitalism and property, with a bit of love story thrown in for good measure. Soames is the ultimate Man of Property, and a truly loathsome character. This Audible edition, read by David Case, is a superb example of a good audio book being even better than the original. David Case's narration brings the characters and the drama alive. I have tried to read this in eBook format several times, always bogging down at some point. But listening to Mr. Case's narration of the book on a long trip was a complete revelation and made the tedium of long stretches of driving positively enjoyable. Highly Recommended.

I have a new love - hooked on this family

So glad I gave this a chance. The characters aren't as extreme as Dickens and not as annoying as Austin. The patriarch is complex and does unexpectedly sensitive things. I love him and will be purchasing the next book.

David Case's clear, at times languid but never lazy reading is a great introduction to the Forsyte Saga and suits the stately pace of the book perfectly. I loved the book, too (and An Indian Summer of a Forsyte, which is also included) - the pace is obviously slower than modern novels, but Galsworthy's vivid prose ensures that the reader is never bored.

Highly recommended - I'm about to download the second book, read by the same person.

I selected this version of the man of property because of the positive reviews it has received. The book is a wonderful exploration of late 19th century mores. The narrator however is truly terrible. The way he draws out the vowel sounds for every word he says is entirely unnecessary, off putting and intensely irritating. The voices he gives the characters are absurd. The men all sound like they have respiratory and adenoidal problems and the women sound like monty python characters.
Avoid, avoid, avoid.