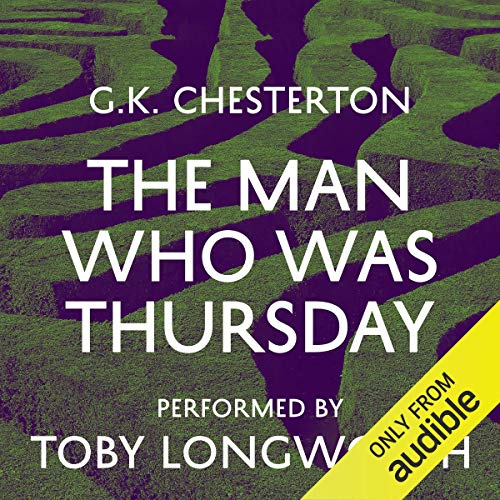 Chesterton's allegorical masterpiece is a surreal, psychologically thrilling audiobook that centres on seven anarchists in turn-of-the-century London, who call themselves by the names of days of the week.

The story begins when poet Gabriel Syme is recruited as a detective to a secret anarchist division of Scotland Yard by a shrouded, nameless person. Syme infiltrates a secret meeting of anarchists who are intent on destroying the world and becomes known as 'Thursday', one of the seven members of the Central Anarchist Council.

Formerly half a double-act with Bill Bailey, actor Toby Longworth left in order to join the Royal Shakespeare Company. Now a specialist in voiceover, his prominent work includes roles in The Hitchhiker's Guide to the Galaxy (2005) and Star Wars: Episode I – The Phantom Menace (1999). He has appeared in audiobooks such as The Wolf Trial and The Lubetkin Legacy. He has also narrated documentaries for the BBC Worldwide Doctor Who DVD range; several of Games Workshop's Black Library audiobooks; and voiced the main character in the video game Amnesia: A Machine for Pigs. His television work has included roles in BBC's Extras (2006) and Not Going Out (2013-2014), as well as Channel 4's The IT Crowd (2006).

" The Man Who Was Thursday is not quite a political bad dream, nor a metaphysical thriller, nor a cosmic joke in the form of a spy novel, but it has something of all three...it remains the most thrilling book I have ever read." (Kingsley Amis)

Cosa pensano gli ascoltatori di The Man Who Was Thursday

If you too find yourself pondering the words behind words, this book may be one you’ll enjoy. It seems hard to admit, but I occasionally enjoy inferring the "thesis" out of a book. I am already enjoying the work again. Unremarkable phrases mysteriously offer subtle clues. Or do they? Such is the enjoyment of a work whose soul is never quite explicit. The work stuns and turns and grows mysterious.

To some, the quixotic nature of the work may be troubling, but few would argue that it fails to capture your attention. The problem, if you indeed see it as one, is the eventual realization that the work is allegorical.

While the allegory may not suit many readers, the work is well written and well read. The sentences seem to possess an unnamed beauty, and the wordplay is engaging.

All of this, to me, is one big recommendation for a work that is not likely to grow stale the moment you’ve finished it.

A clever Christian allegory filled with fantastic dialogue and Chesterton's wonderful inversions and paradoxes. I might not always agree with how Chesterton sees the world, but I think my vision is improved by looking through his literary lens.

I got on to Chesterton after seeing his name on various quotes in Neil Gaiman's work, and I was not let down by this story. It is a great weave, and though the final twist could disapoint some I found it put a smile on my face. (but I won't spoil it for you)

Its not about realism

Some people think this book gets a little odd halfway though. It does, the style of the book changes. Once you've read it all, you may need to re read it with the understanding you've got from the second half. I certainly will.

The story is one of my favorites.

The volume changes a bit too much.

I think the Audio could be edited easily to fix this!

if I had the source files I could even fix the volume easily enough myself.

Chesterton at his best

I've always loved Chesterton's writing style, and of his fiction, I like this book most.

My preference is for the narrator to simply read the story. Of course, the narrator's personality is assumed, but I can't listen to books which are 'acted'. Unfortunately, this is the second book which I just can't listen to. Very disappointing. I realize I must listen to samples before purchasing.

I was completely apathetic towards all the characters by the end of the book. Certainly not my favorite.

I need hardly say there was a collision.

This is excellent and one of my favourite books. Subtitled A Nightmare, it follows that dream logic in which the rational world is twisted kink by kink until you are running for your life. Surely too some seeds of The Goon Show and Monty Python spring from here. Toby Longworth's reading is a joy, clearly revelling in the comic absurdity, witty lines, and giving terrifying voice to the Man who is Sunday.

This starts off so brilliantly, with Chesterton's characters pursuing each other with the all the wit and intelligence that he used for Father Brown. But the last section does drag and becomes very surreal and quasi-religious. I felt very frustrated by the way it ended.

The performance is very good - almost every character is distinctive and consistent and there are no odd pauses or pronunciations.

A fun and enjoyable book I'm not sure I get the point, but it's an interesting book nonetheless.

The Man Who Was Thursday

I only knew GK Chesterton's Father Brown stories before I listened to this. This is a great read. I found it funny (especially with the different voices given to the characters by the narrator) and fast paced. Thoroughly recommended.

Don't expect Father Brown. This is a philisophy thriller very much of the Edwardian era. A great period piece. If you like Wilkie Collins then you would probably get on withthis book. Very enjoyable and a nice surprise.

I wondered in the first chapter why Kingsley Amis rated it so highly. That became apparent as the story unfolded. I could not have begun to imagine the direction we were taken. A profoundly thoughtful story. commended.

Witty, funny, and with a lot of profundity under the fun. You think you know where it's going but you're probably quite wrong, and several times. I'm still not quite sure I know what to make of it, but I'll be thinking about this one for a long time.

Like a tube of toothpaste with the end cut off

The performance is top rate. The front 90% of the story is just brilliant, weaving philosophy, chases, comedy, and swordfights. The end is awful. Chesterton probably loved it. But he should have stuck with allegory.

This wild tale by Chesterton is very engagingly read by Toby Longworth, who has quite a compendium of voices to keep going. Although much of it is very funny, there are serious points to be made. Plot-wise, it'll keep you guessing to the end and perhaps beyond.There is a great accelerando in the telling; as more characters come aboard, the tempo of the adventure increases and this is well handled by Longworth, for whom I shall look out in future as a favoured narrator.

Apart from some good descriptive writing of people’s appearances and weather effects the story no longer has any relevance and the sentiments and emotions experienced and described were to me so seriously outdated as to be irritating.
The narrator really didn’t stand a chance as I lost patience with the whole thing. Have enjoyed the wit of Chesterton before but no, not this.