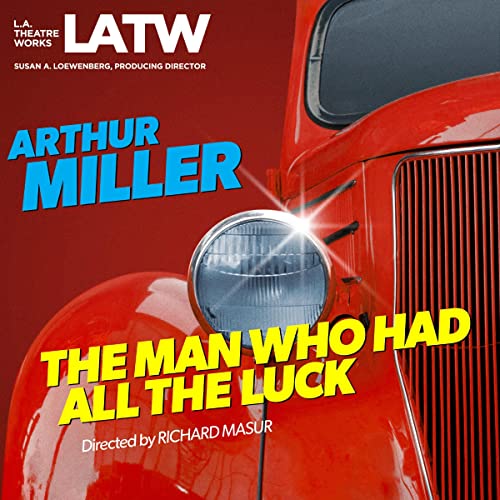 The Man Who Had All the Luck

An early Miller gem about a young Midwesterner who finds good fortune shining on him while it passes others by. As his successes pile up, he starts to wonder if he deserves it—and what will happen when his luck finally runs out.

Includes an interview with director Michael Hackett. Recorded before a live audience at the Skirball Cultural Center, Los Angeles in April 2007.

In Miller's very first play, life gives a young man just what he needs and wants - a wife and property, a thriving motor repair business, a son. But it all drives him distracted as he waits for the misfortune he perceives to be inevitable. Those around him, some of them tragically luckless, react in ways supportive and not. The play is a somewhat uneasy mix of comedy and drama, realism and fable, Miller and Thornton Wilder. It's an interesting and engaging work nevertheless. While there are few moments of great dramatic excitement, there are also no flaws. Pacing is good, and every cast member is solid, capable, and professional. While this production will especially intrigue Miller aficionados, it should interest any listener.

This piece is well worth a listen. I especially enjoyed the interview with the director at the end. Very enjoyable.

Bad sound mixing and all the characters sounded like they were all at front and centre of stage as were the sound effects - Same with other of the LA Theatre co' productions
The Yanks need to learn from some BBC drama sound scapes !