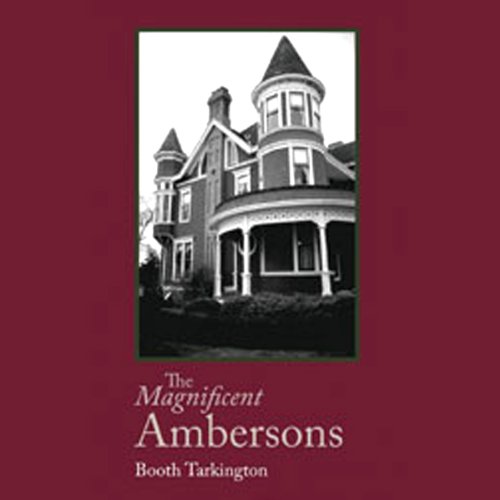 The Magnificent Ambersons chronicles the changing fortunes of three generations of an American dynasty. The family serves as a metaphor for the old society that crumbled after the Industrial Revolution, as a Midwestern town spreads and darkens into a city.

George Amberson Minafer is the spoiled and arrogant grandson of the founder of the family's magnificence. Eclipsed by a new breed of industrial tycoons and land developers, whose power comes not through family connections but through financial dealings and modern manufacturing, George descends from the Midwestern aristocracy to the working class. As the wheels of industry transform the social landscape, the definitions of ambition, success, and loyalty also change.

Orson Welles based his classic film of the same name on Tarkington's novel.

"All fiction collections should own a copy." (Library Journal)

Change - The only thing that is truly constant

I find myself thinking of this book often. The past is always beautiful in our eyes, like George Minafer's mother. The present is drab and plain like his aunt. The future is fast, bold, and unwanted like Mr. Morgan. Life moves on, whether we want it to or not. I love the line "Get a Horse!" because those unreliable automobiles are just a fad. -- While this book was written in 1918, it's moral is certainly timeless which is in and of itself is quite ironic. The book does seem to drag just a bit which is why I have given it only 4 stars instead of 5.

Great Narration to a Great Story

Very well narrated. Great story and characters of a time past.

Many of the great ones too are soon forgotten

This is one of those fantastic little classics (it won the Pulitzer Prizes second prize for the Novel category in 1919) that while not exactly ignored, certainly aren't read as frequently today as the author's talent should demand. It was made in 1942 into a movie by Orson Wells (his second film) so it does have that anchor to keep it from slipping further into the darkness of the past. I guess old fiction is like old families.

"Nothing stays or holds truly.
Great Caesar dead and turned to clay
stopped no hole to keep the wind away;
dead Caesar was nothing but tiresome bit
of print in a book that schoolboys study
for awhile and then forget."

I guess the same can be said of literature. Most books are eventually pulped. Even the good and many, many of the great ones too are soon forgotten. The writer's impulse is for some glimmer of immortality, but memories and readers are damn fickle things. We collectively shrug off and forget those we recently purchased, those banging the publisher's gongs to get attention, and to hell with all those public domain dead writers -- even if they did write such beautiful books.

This enduring classic was a Pulitzer Prize winner in 1919. The novel shows life in a small town in the early part of the 20th Century before and after the automobile made an impact and changed the status of the town's prominent families. The author portrays the decline of the big estates and the rise of a new aristocracy based on business acumen and not only inherited wealth. The main character, George Minafer, is not very likable, although by the end of the book, he is more sympathetic. His mother seems to me overprotective and indulgent toward George and this leads to his personality problems. Tarkington introduces humor, especially in the first part of the book, where the townfolk gossip about the Amberson family. This is a well written story with astute characterizations.

The narration by Geoffrey Blaisdell is excellent. I especially liked his tone and inflection when George exclaims: "riff-raff!".

time to dust off this old chestnut

It's worth the listen just for character Eugene's musings on the future of the automobile and suburbia.

The novel struck me as Theodore Dreiser/Edith Wharton lite, but without Dreiser's drawn out prose or Wharton's pathos (that is, a happier ending in fewer, less eloquent words, but still with a good social history lesson thrown in).

The narration was very good -- another example of a fine novel I would never had encountered had it not been delvered (and for $4.95) as an audiobook. I hope Audible adds the other two in Tarkington's series.

I really enjoyed both the book and the way it was read. Two thumbs Up!

Hoosiers will especially enjoy this.

#100 on the Modern Library's 100 Best English Fiction of the 20th c. Being a Hoosier, I found it interesting to read about an area of Indianapolis at the turn of the last century, which was representative of how industrial changes were affecting families' fortunes, neighborhoods, attitudes and social customs. The main character is very unlikable, but becomes interesting in the end.

My biggest problem was the narrator. He was pretty good except when voicing older people, who all (including the old ladies) sounded like Zeke, the old miner in so many movies - I couldn't tell the difference btwn Grandpa, Uncle and other men older than 25. It was especially grating when he voiced older women.

Otherwise, it moved quickly and the writing easily put me back 100 years. Descriptions of clothing, architecture, manners and everything else were quite good. I felt like I had traveled back in time.

Strong story, great characters. "Supernatural" ending ruined it somewhat for me. Overall worth reading and worth being called a classic.

This book really transports you to the turn of the century (20th century) and gives a sense of what it was like. The reader is just right for it too. He brings the attitude of that time to the book. I thoroughly enjoyed this book. I would say, if you like Jane Austen "type" books with a lot of character interaction, you'll like this.

This classic is ruined by the narration - no inflection - almost a monotone. Took me months to get through it - I could only stand the narrator for about 1-2 hours!
Get the book - but find another narrator!