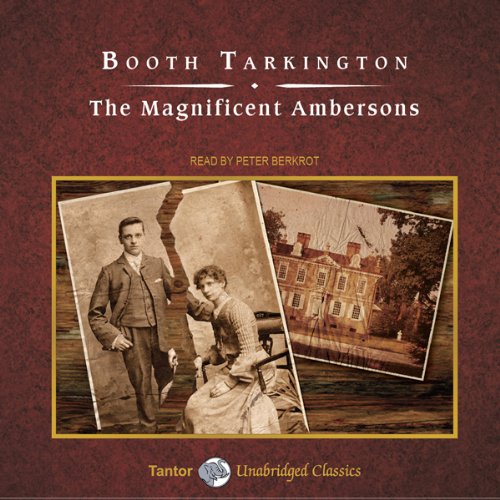 Set in the Midwest in the early 20th century - the dawn of the automobile age - The Magnificent Ambersons begins by introducing the Ambersons, the richest family in town. Exemplifying aristocratic excess, the Ambersons have everything money can buy - and more. But George Amberson Minafer, the spoiled grandson of the family patriarch, is unable to see that great societal changes are taking place and that business tycoons, industrialists, and real-estate developers will soon surpass him in wealth and prestige.

Rather than join the new mechanical age, George prefers to remain a gentleman, believing that "being things" is superior to "doing things". But as his town becomes a city, and the family palace is enveloped in a cloud of soot, George's protectors disappear one by one, and the elegant, cloistered lifestyle of the Ambersons fades from view and finally vanishes altogether. The book won the 1919 Pulitzer Prize for fiction and inspired the Orson Welles film of the same name.

This is a great tale of fortunes one and lost, unchanged love, and personal redemption. Included is the Lorax-like quality of the growth of this midland city, and a glimpse to the building up of America.

The story would be greatly more appreciated if one would drive through an old neighborhood seeing a stately mansion sandwiched between apartments and rental housing. "Ahhh, now I understand !" The story brings to life how the collapse of the early 1900s came about. Historically accurate. How arrogance brings calamity and how true love redeems.

I did enjoy this book. It was interesting to see the same life themes were present 100 years ago that are present today. Human nature I guess. Good character development and interesting how you eventually grow to like Georgie despite his lofty feel for his own self worth. A story of love in the end.