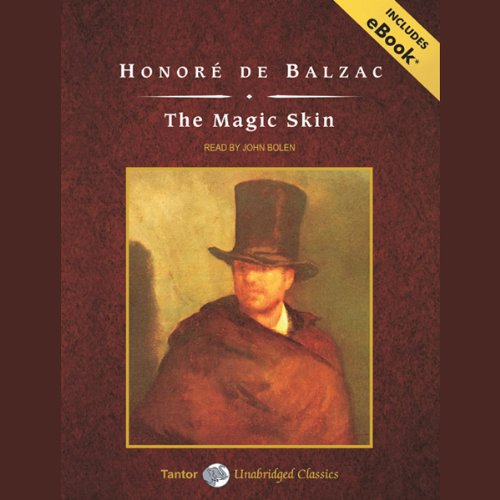 "The possession of power, no matter how enormous, does not bring the knowledge how to use it." Raphael, a failed writer, deep in debt, and unrequited in love, is about to take a suicidal plunge into the Seine River. Just in time, he discovers the "Magic Skin" in an antiquity shop. Its supernatural powers grant every wish but it extracts a terrible toll! This parable depicts the malaise of 19th century France.
©2002 Tantor Media Incorporated

What a lousy reading! There were so many fake French accents, ALL of them unneccessary, that the book is unintelligible. I gave up after two hours. Don't waste your time or money.

Unbearable to listen to the reading!

As other reviewers have said, this Balzac novel does start off slooooowly. Which might be OK if the reader didn't use an incredibly bad "French" accent that makes it hard to understand the words and that distracts from the story itself. My wife and I simply don't have the stamina to wait for the story to get better, since the reader has worn us out with his faux French accent. Two hours into the listening, we're giving up. Definite waste of money, this one. Now, maybe Cousin Bette will be better . . .

This is one of my favorites by Balzac. Warning: like many of his novels (and even more so) , this one starts out slowly, then bursts into action in the second half.
I found the reading itself disappointing. When the characters speak, the reader uses a strange prody of an Eastern European accent--think Pepe le Pew meets Dracula. He also lowers his voice, and kind of growls which is odd, since for the most part, the characters are are very young--in their 20's. This sounds like no French person I've ever known (and I know many), and worse, is often impossible to understand.

When you *can* understand it, this strange accent seems to mock the characters, the story, the French...What a shame! I kept vowing I would not listen through to the end, but it is such a good story,such a great author, and my commute is SOOOO long, I was able to muscle hrough it.

Did the real narrator call in sick? Does this narrator not have more than a passing familiarity with the English language? Yes, apparently, on both counts.

First of all, five stars for Balzac because, well, Balzac. It's a fantastic story, but I'm afraid it's rendered unbearable by this reader.

Remember when kids would be called upon to read passages of a story out loud by the teacher in grade school? Remember their flat, unremarkable, dispassionate dictations? That's what you get with this reader who can't even pronounce many English words (conjuring becomes con-JUR-ing in his hands), much less the French accents. A computerized LibriVox version would be preferable to this. John Cleese's silly French knight in "Holy Grail" was more believeable.

Unfortunately, this one is a pass.

What was one of the most memorable moments of The Magic Skin?

That freeing moment when I decided to read the kindle version instead.

Could you see The Magic Skin being made into a movie or a TV series? Who should the stars be?

that I could not even understand.

Unfortunately, the story was ruined by the voice actor who tried to do the accent of the characters. This resulted and often times unintelligible read. There are entire parts of the story that I missed out on, not because I wasn't listening but because I literally could not understand what was being said. Any other voice actor would have sufficed, so long as I was able to understand what was being said. If you are going to do an accent, at least do it well.

Vintage de Balzac but not a great novel

I loved the narrative and character development of de Balzac in "Pere Goriot" and "Cousin Bette" but "The Magic Skin" is too philosophical for my taste. Felt more like an essay than a novel. The start of the story is quite slow and I almost gave up reading at that point. The book is worth reading but I long for other de Balzac works in the mold of "Pere Goriot."

This is, I think, the worst read audiobook I have ever listened to. It is so badly read that it is not possible to follow or understand the story. Pauses in all the wrong places, pseudo-French accents (as if one needed this) for the dialogue, and the said (un)French accents make it almost impossible to hear, much less comprehend, what is going on. Had I known in advance, I should never have bought it. Pity, as I understand it's a great novel!

The Chagrin is in the listening??.

Balzac is a loved Parisian companion of many a jaunt to a g?te. Give the guy a break, you need the absolute of the French countryside to enjoy this one fully. Not to everyone?s taste, but then you pass many caravans on Le Franciliene and though bound for campsites we?re all still on holiday, aren?t we?

What a poor production of ?La Peau de chagrin.? One of the true French greats really grates here ? having to turn my speakers right up to get any sort of reasonable delivery. ?In-audible?, I think is more appropriate.

All direct speech is read in a faux French accent and is completely unintelligible. The pronunciation of French words and places is incorrect.