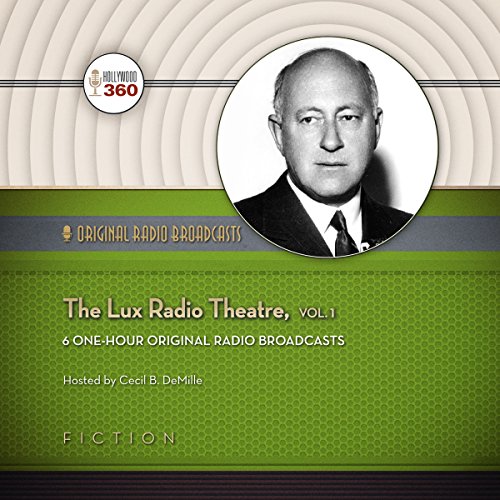 Hosted by Cecil B. DeMille and starring numerous icons of the screen, this collection of old-time radio classics includes six episodes of The Lux Radio Theatre - one of the longest running, most extravagant shows from radio's golden age. The show featured the greatest stars in Hollywood appearing in hour-long radio adaptations of their biggest motion pictures, making this lavish production a veritable checklist of many of Hollywood's best films from the mid-1930s through the mid-1950s.

The stars of the movie usually appeared in their audio counterparts, though sometimes contracts or schedules got in the way. The productions were live, with a full orchestra, and many Hollywood legends were not used to performing in public without the benefit of retakes. Just some of the stars that appeared on The Lux Radio Theatre include Elizabeth Taylor, Ronald Colman, Errol Flynn, Robert Young, Mickey Rooney, Humphrey Bogart, Barbara Stanwyck, Cary Grant, Clark Gable, Frank Sinatra, John Wayne, James Stewart, and Loretta Young. Sponsored by Lever Brothers, the makers of Lux Soap, The Lux Radio Theatre came to radio in 1934 and lasted until 1955 for a total of 926 hour-long broadcasts. It transitioned to television in 30-minute weekly installments in 1950, with James Mason as host.