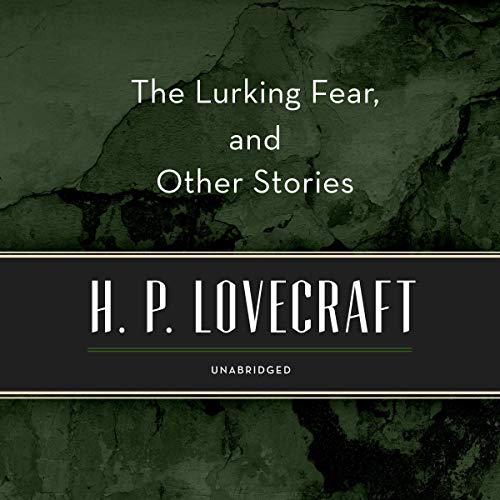 The Lurking Fear, and Other Stories

H. P. Lovecraft's Cthulhu Mythos is a primary influence of countless iconic authors, and even now, nearly a century after its publication, its themes of cosmic horror and madness remain at the forefront of supernatural literature, as well as being highly influential in the mediums of music, film, and video games. But Lovecraft's expansive imagination didn't stop there. This five-story volume contains some fascinating rarities outside the Cthulhu Mythos.

The Lurking Fear includes examples of Lovecraft's earliest weird fiction including "Hypnos", "What the Moon Brings", "Imprisoned with the Pharaohs", and "Memory" (inspiration for the 2014 film of the same name), as well as the title story, "The Lurking Fear", a traditional horror study commissioned by George Julian Houtain to be run as a serial in Home Brew magazine in 1923 that has served as the source material for multiple films and been adapted into a comic book.

Only H. P. Lovecraft could conceive the delicious and spine-tingling horrors you will find within this unique five-story collection.

Boring voice on a masterpiece

This guy who is reading reads with no passion. His voice is boring and did no justice to Lovecraft's work.

Not bad but not great

The stories themselves were, overall, good. Just a handful of short stories. Not scary, but it's neat reading/listening to Lovecraft. His work has influenced so many other authors. The narrorator...*sigh*. He has a good voice, but no passion. You can tell he thinks of narrorating as a "Job". There's no life in his performance. Really seems like he is in it only for the paycheck. I just think that when a person is narrorating, they are performing, and they also should see it as such. There are many other narrorators that have great voices and have a passion for what they do. Sorry, ranting. It's just such a bummer when you do have a good story(stories) but then the narrorator stinks.

The actor was great, but many of the sentences were cut off at the beginning, sometimes up to what seemed like several words. It was super disorienting and confusing, so I eventually stopped listening.

Missing a couple pages of text

Great readings overall, but about five minutes worth of reading of the second installment of "The Lurking Fear" are inexplicably missing from the middle of this chapter (and clearly not left out as an editorial "choice"). Note that the "Pharaohs" story is also known as "Under the Pyramids": the unnamed narrator is Harry Houdini and the story was originally published under his name (i.e., Lovecraft was the ghostwriter).

Was I supposed to be scared?

I thought Lovecraft stories were supposed to be horror stories and I didn't even feel uneasy.

A wonderful reading of some lesser known but thoroughly creepy tales of twisted horror. Great fun on a dark and stormy night…

Could Have Been Better

I do like Lovecraft's work and I enjoy the narrator but he should not read Lovecraft's work. There's no life in his voice so it's hard to pay attention and feel emersed in the work.

Loved the narrators voice but it was occasionally hard to hear

Great voice for the stories but it was occasionally hard to hear/understand (especially while driving or near other noise sources) Lovecrafts’ wording and phrasing did not always pair well with this and I occasionally had to rewind to understand passages. Overall great performance.

I loved listening to the stories in this audiobook. The narrator had a great voice that really worked for the stories. I would definitely recommend this audio book to other HP Lovecraft fans.

Lovecraft amazes. Didn't think I would enjoy a book being read to me. how wrong I was.

I do think that there are some modern story writers who are very good in expanding on the Lovecraftian universe and Cthulhu mythos. There are numerous stories, games, and even some movies that manage to build awesomeness upon this material. But Lovecraftian books themselves are mostly silly scary tales for children. And I think the only thing that really scares me in these stories is the choice of adjectives used to smother the listener.
He may be the first guy to write this sort of fiction, but you got to admit these stories are mediocre at best, and only present historical value 🤷‍♂️

Very atmospheric and the narration is on point for the genre. Will buy more great work

Perhaps it's due the stories being a product of their time, but as a modern listener, I found them to be very boring and anticlimactic. I also found some of the narrator's pronunciations to be very off putting