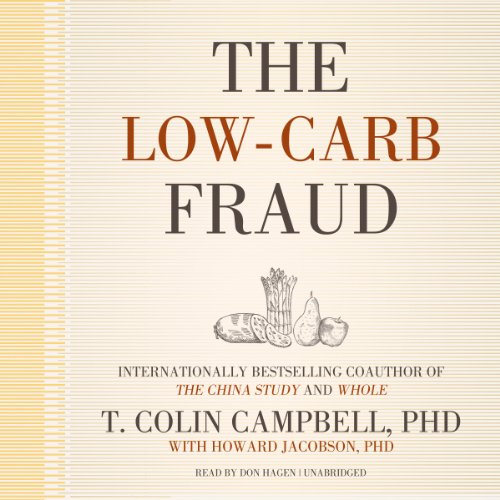 By now, the low-carb diet's refrain is a familiar one: "Bread is bad for you. Fat doesn't matter. Carbs are the real reason you can't lose weight."

The low-carb universe Dr. Atkins brought into being continues to expand. Low-carb diets, from South Beach to The Zone and beyond, are still the go-to method for weight loss for millions. These diets' marketing may differ, but they all share two crucial components: the condemnation of "carbs" and an emphasis on meat and fat for calories. Even the latest diet trend, the Paleo diet, is - despite its increased focus on some wholefoods - just another variation on the same carbohydrate fears.

In The Low-Carb Fraud, longtime leader in the nutritional science field T. Colin Campbell outlines where and how the low-carb proponents get it wrong: Where the belief came from that carbohydrates are bad and why it persists despite all the evidence to the contrary. The foods we misleadingly refer to as "carbs" aren't all created equal, and treating them that way has major consequences for our nutritional well-being.

If you're considering a low-carb diet, read this book first. It will change the way you think about what you eat - and how you should be eating to lose weight and optimize your health, now and for the long term.

This book really breaks down the problems with eating low carb diets. Everyone should read this.

Is it too late to get my money back?

I recently started the keto diet, which is a low-carb diet. I was blown away how successfully I have been losing weight over the past few weeks. But when something seems too good to be true, it usually is. so I decided to try to read up on the downsides of low-carb diets. This book had surprisingly high ratings, I guess there's a lot of dumb people out there. I got that the author is a very well distinguished person in his field but this book was nothing but a persuasive argument. He pretty much spent the first two chapters just trash talking some Tobbs guy that I've never even heard of. All the author did was just try to defend himself from what tabs said in his book and discredit his work with some casual information. As a scientist myself I guess I was looking for an understanding of how our metabolism works and what actually happens to your body when you are on a low-carb diet. I quit this book after the first two chapters because I gleaned absolutely nothing from it. And it's really hard to believe the author when he tells you based on his research that low-carb diets don't work when you are living proof that they do. But just because of low carb diet works doesn't mean it's healthy. I think this guy was too busy trying to defend his life's work that was apparently criticized by someone else to actually give us some facts to work with. he came off as incredibly egotistical and childish. This book was definitely a complete and total waste of time and money in my pursuit of knowledge of how my metabolism works.

You say thanks to the taxpayers for this book. I want my tax share back please. I have personally reversed my liver cancer and all other metabolic issues, by doing the opposite of what this book suggests. Every person is different. Carnivore/paleo/keto has brought me to a health I’ve never experienced. I feel better at 58, than any age since High School. Different strokes. My grass fed steak is done. Peace!

Tried to give an honest listen.

I wanted to go into hearing this book with an open mind from everything I have read and listened to. What bothers me a lot about hearing this book, is that the amount of information discussed is extremely mute, more time is spent on saying the other side is just wrong then rather actually show any substantial evidence to prove their argument.

Careful when using the word fraud . . .

Be careful when you see the word Fraud. I am a physician, and suggest the interested reader listen to both sides of this question. This PhD author seems somewhat jealous of his peer group, and even perpetuates the myth (from the "vegetarians") that Dr. Atkins died from low-carb diet consequences. (Dr. Atkins was 6 ft., 195 lbs when he suffered from a head injury. He died bloated, with organ failure, in a coma.) This author also clings to the "cholesterol is the problem", soon to be arcane. There is valuable information here, but only if tempered with some outside information. (Fat comes from carbs, not from fat.)

Would you ever listen to anything by T. Colin Campbell again?

Every decade, we learn the new truth. I suspect we are not finished yet. iDoc

I love the work of Dr T Colin Campbell, and this book is no exception. I wish it was narrated by him, however I really enjoy listening to Don Hagen. :)

This is a good read and an eye opener. I see the need to learn much more. I recommend this book to anyone who wants or needs better health.

Book focused on the research of others

Colin Campbell has made a fool of himself.

He is promoting his whole food diet, which may be a good idea, but completely misrepresents what low carb is really about in ways that are so superficial and obvious, he really should be embarrassed.

What could T. Colin Campbell have done to make this a more enjoyable book for you?

He could have been more upfront in his desire for people to eat whole foods rather than trying to disprove low carb with paper thin arguments.

Could you see The Low-Carb Fraud being made into a movie or a TV series? Who should the stars be?

If he knew what was good for his reputation, he would remove this book from publication and focus on his mission of promoting whole food diet.

Trying to come across as an expert by misrepresenting other perspectives and then using your own propaganda to spread lies is just poor.

This book may fool some who are unable to actually hear what he is saying, but if you actually listen to what he says about low carb and know anything about the reality of how it works, Colin Campbell becomes more like a used car salesman stretching the truth, and sowing lies to hopefully guide people away from a way of living that may be the best option for them.

I agree his message of eating a whole food diet may be a positive option for many, but the way he tries to discredit low carb is so obviously filled with blatant disregard for the truth of what low carb eating is, either he has done absolutely no true research or is just floundering and figured deceit was justified to save his concept of low fat, whole food vegetarian diet.

I honestly feel sorry for him at this point.

Great short listen on why all carbs are not evil

This was a real short book. It discusses the authors perspective on good carbs and the not so good carbs. Backed by his meticulous research as always.

The reader was making a rather annoying hissing sound whenever letter s what at the end of the word. The author is complaining about the lack of research in support of the low carb diet yet no real evidence was presented for the whole food based diet. The study done by Dr Hornisher that was referred to as proof of whole food based diet reversing heart decease was conducted on a group of people of less than 30! I deem it not a statistically significant sample size plus aside from nutrition this group also improved their physical activity and from what I understand stopped smoking, both of which are significant factors to human wellbeing. Ancel Keys’ studies have been fraught with issues such as selection bias over countries that matched the hypothesis yet none of this was mentioned here. Information on cholesterol and its linkage to heart disease is incorrect; many recent studies in this field show no linkage at all. It’s the sugar that seems to be the culprit instead.

What would have made The Low-Carb Fraud better?

Evidence supported assumptions and statements. This author expect us to believe him without providing any evidence to back it up. When evidence is provided he mis quotes research or mis-represents the research.

Would you ever listen to anything by T. Colin Campbell again?

No. I find his book condescending and lacking the evidence to support his claims. He has mis represented the low carb movement and misses out key aspects of the studies over thte years. He is perpetuating the myth of High carb, low fat diet that is causing the obesity crisis.

Did Don Hagen do a good job differentiating each of the characters? How?

Not relevant on this book

What character would you cut from The Low-Carb Fraud?

Do not buy this book. It is not objective, balanced or based on sound or well supported evidence.

This was just an exercise to promote and forthcoming books. This book was mainly a stuck-in-the-mud with a PhD ranting about a journalist who obviously does not possess a PhD, therefore anything that he says that contradicts Campbell must be wrong. I was hoping for some convincing, compelling science to be given. Unfortunately not a chance, just justification of previous review boards that he had sat on. A complete waste of time and money. He has done the whole food lobby a disservice.

This is an interesting and factual book, it was well read and I like the fact that Colin Campbell has no agenda apart from helping the planet become healthy individuals! Thank you.

It's a quick book especially after reading both the China study and Whole; both great books!

A great, but short book

I thoroughly enjoyed this book, but would have liked it to be a bit longer. Will definitely be listening to "The China Study", and "Whole", as the material presented here seems first class to me.