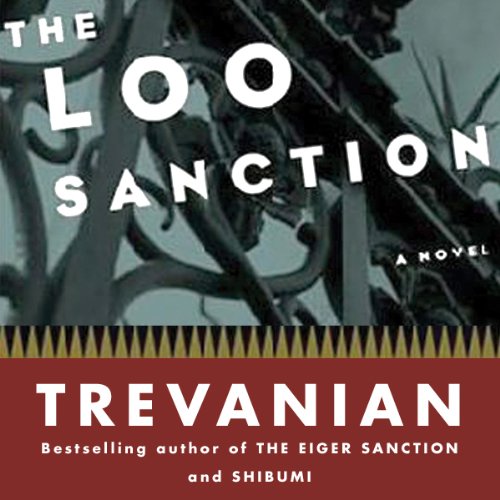 Jonathan Hemlock, the art professor and mercenary who first excited readers with his daring exploits in The Eiger Sanction, returns for another masterful adventure.

Jonathan has gone to England for a vacation, but it is interrupted when British Intelligence needs him for his highly skilled services. Jonathan must take over the mission of an agent whose murder was so bizarre and terrifying that no other agent was willing to replace him.

His task is to locate a set of secretly made films that incriminate a number of high-ranking British officials. His target is a top underworld figure who delights in debauchery and torture.

Facing this threat, Jonathan is drawn into a labyrinthine network of intrigue and depravity. When the pieces of the dangerous puzzle fall together, he will be forced to attempt one of the most daring escapes ever conceived.

Read All of Trevanian!

In general, the novels of Trevanian blow away our current best selling authors who deal in similar genres. Artfully rendered in plot and character complexity, as well as sense of humor, humanity, and language of superb story telling, these are riveting stories that should endure. Though set in his contemporary era of the early 1970's, I think Trevanian is timeless. The narration performance of Joe Barrett is the best that I have ever experienced on Audible (and I have been through many good ones)! He depicts different male & female characters so seamlessly that the listener needs to make no conscious effort to know which character is speaking. A fabulous performance by the narrator, Joe Barrett! I only wish there was more from Trevanian. I recommend reading the earliest to the last.

Is it really satire

Is it really satire if it's indistinguishable from the obtuse observations of self-indulgent hacks? It's not as puerile as The Eiger Sanction, but the author desperately tries to establish the main character Jonathan Hemlock's post-racial, post-sexist bona fides, and being above it all when it comes to social convention. It's clear the intention is to create a kind of subversive irony, but it falls flat into corny tropes, particularly when it comes to females, homosexuality, art deco, martial arts and any kind of modernism. In fact, Hemlock dismisses anything outside of his sphere of understanding, which by his own account is immense, at one point mocking the attention paid to the insignificant matter of the Watergate break-in (the book was published in 1973). Perhaps the author is playing an enormous joke wrapping this odious character in the cloaks of both toxic masculinity and white privilege, decades before those terms gained currency. But I doubt it, the writing just isn't clever enough for that.

Still not quite sure

I've always absolutely loved Trevanian, although I've only read Shibumi and The Eiger Sanction. I bought this book with great anticipation, hoping for another masterpiece, yet when I was finished listening I could only think, "Gee. Is that it?"

The book is well-read by the narrator, however it's difficult to keep the rather vague story line straight. Things happen and you think, "Wait a minute - when did that occur?" I'm actually listening to it again, because I thought I might have missed a few things the first time (sometimes I'm not awake while listening on the way to work in the morning).

I just learned something by going back onto the book's summary page on this site - it isn't really explained in the book why Jonathan is in the UK (a vacation? and where did it say that no other agent would accept the job?)

This is all disappointing because Shibumi was such a fantastic read, that I've always wondered why no one has made a movie out of it.

I'm still wondering how Maggie came into the story - perhaps listening to it a second time will explain it.

I wish I could be more enthusiastic. I think I'm going to download Shibumi, just so I can listen to it again. It's been at least 7 years since I last read it, and I'd love to experience it again. Clearly Trevanian was at a creative high when he wrote that and The Eiger Sanction.

By the way, I TOTALLY picture Clint Eastwood as Jonathan Hemlock - they certainly cast it right when they did Eiger.

Good story and exciting. However, this book was published several years ago and the info that touted the book did not mention this. I purchased this book having forgotten that I had read it when it first came out. If I had been made aware of this fact I would have purchased sonething else.

Ok But Not up to The Eiger Sanction

The story was out of character of our hero of the first installment. It did not work well. It was ok and entertaining but if you are expecting something like the Eiger Sanction...it will fall a little short.

After reading Shibumi and the Eiger Sanction, I expected much more than this book delivered. Would not recommend it.

not up to tavanian's standard

I loved Shibumi and the Eiger Sanction, but this one was so sloppy and cheap in comparison with a poor finish. The antics and the writing are still a fun, clever, but nothing clever or even finished in story and plot.

This is my first novel by Trevanian and I will certainly be getting more. Can't wait to pick out the next one. Totally engrossing - held my interest for the duration. Dr. Hemlock, I imagine, is like James Bond.

Joe Barrett is a great reader, and this is a fun, slightly racy spy thriller. The violence is pretty brutal.

What other book might you compare The Loo Sanction to and why?

Yes, but it would be a spoiler to say what.

OK... you have to take this in the correct spirit and it is going to be a Marmite story ('love it or hate it').
This is a spy spoof that is played out seriously... its not 'Our Man Flint' but probably would be if it was filmed. As a book it is 'delivered' more like the 'James Bond' books (not films), and it is an enjoyable yarn. If you like those 60s/70s TV series spy series, you'll probably like this.
There are great bits of realism (well, maybe 'post-realism'... the Art theft in the book was copied later in a real life theft from a Milan gallery), and there are bits of 'Man from Uncle' silliness, right down to the name of the 'Loo' department.... hmmm.
The narrator seems to have more difficulty with the accents in this book than others he has narrated... As a another reviewer has mentioned, he cannot really get around the English and Irish accents acceptably, but rather than this being off-putting for me, I actually thought the 'Dick Van Dyke-ness' of the delivery went rather well with the comedic story... even though it is played out straight.
I really enjoyed this and found myself equally laughing at its silliness in places, while also wanting to work out the solutions to the plot.

Glad to have finished it

I realised that this was a spoof spy story but I found it impossible to get past the reading style to find any humour there may have been there. I don't know whether the reader did the same damage to American accents but the English ones were very strange. There was cockney worthy of Dick van Dyke and sometimes used in the same sentence by the same character along with Irish and Birmingham and others. I may have been missing another joke but I was really glad when I reached the end and didn't have to listen to it any more.

Not a patch on the Eiger Sanction

was hoping it was going to be another Eiger Sanction but it just wasnt. the story was no where as engaging as tge first novel.