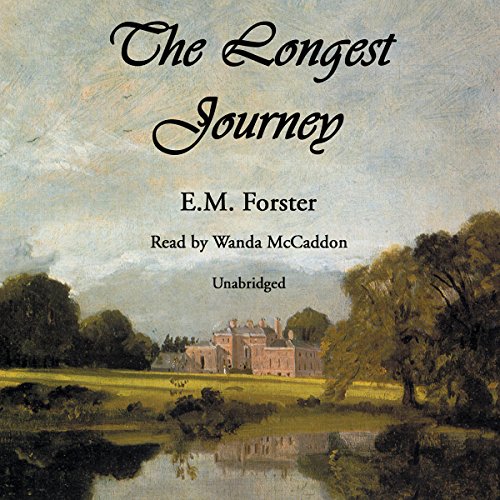 In this searching tragicomedy of manners, personalities, and world views, E.M. Forster explores the "idea of England" he would later develop in Howards End. Bookish, sensitive, and given to wild enthusiasms, Rickie Elliot is virtually made for a life at Cambridge, where he can subsist on a regimen of biscuits and philosophical debate. But the love-smitten Rickie leaves his natural habitat to marry the devastatingly practical Agnes Pembroke, who brings with her, as a sort of dowry, a teaching position at the abominable Sawston School.

Out of this misalliance comes Forster's most stylistically daring novel. As it follows Rickie from the comforts of Cambridge to the petty intrigues of Sawston to the lush, haunted environs of rural Wiltshire, The Longest Journey gives us a comic yet immensely moving vision of a country split between pragmatism and imagination, sober conformity and redemptive eccentricity, upright Christianity and delirious paganism.

Forster, not at his best

I am a great fan of E.M. Forster's novels. I would not recommend this one very highly, however. The book, as a whole, is slow moving, particularly the first quarter of it. I found the book more interesting when the main character, Ricky makes his bad marriage, reconnects with his aunt, and discovers that he has a half-brother. Apart from the slow pace, I found the book rather difficult to follow a number of times. There are shifts of time and place that are not clearly described, but rather left for the listener to infer. There are a lot of interesting characters in this novel. I wish the story had been presented better. Nadia May's narration is superb but does not fully save this audiobook.

What was most disappointing about E.M. Forster???s story?

The story was sappy, convoluted, lame and interminable. I have enjoyed a number of E.M. Forster's novels, particularly A Passage to India and A Room With a View, but this was very disappointing. It just went on and on with characters it was hard to care about.

What does Nadia May bring to the story that you wouldn???t experience if you just read the book?

Could you see The Longest Journey being made into a movie or a TV series? Who should the stars be?

I suppose a ruthless editor and a great director could make a movie out of this.

Narrator does her best with deeply turgid prose

Hard to say -perhaps Miss Prism from "The Importance of Being Earnest"?

What could E.M. Forster have done to make this a more enjoyable book for you?

It's an awful book full of horrible people. It is very much a period piece but it is difficult to believe there was ever a time when people were so pretentious, snobbish and melodramatic; Forster is terribly earnest and all his characters take themselves incredibly seriously. My advice would have been to lighten up.

Have you listened to any of Wanda McCaddon’s other performances before? How does this one compare?

The narrator is not Wanda McCaddon but Nadine Rea. She does her best, but the material is awful; it also seems odd to have a female narrate a book where most of the characters are male, and in the end means that she can't do much to distinguish the voices from each other.

What character would you cut from The Longest Journey?

God, all of them. Ricky is the central character and unspeakably tedious, so ultimately I'd have to cut him.

I was just very disappointed in this, having enjoyed other works by Forster. It was for my book club so I felt like I needed to make it all the way through, and I feel sorry for the narrator, but it's a pretentious, naive, self-important and very tedious book full of narrow-minded, histrionic and deeply unpleasant people. I can see why it hasn't achieved the success of his other books, and can only be grateful that even Merchant Ivory didn't think it worth filming.

Unfortunately, the quality of the reader's voice does not make this a good listen, and makes it easy to be distracted

This is not the place to start with Forster, and not a great one to end either (as is the case for me). It's somehow so un-Forster. Yet, he seems to have loved this creation of his best! Could my struggle with it have something to do with the Narrator? She gets annoying. Nadia May is very similar, but slightly less annoying - available elsewhere. Can this novel be read well in a female voice? Might it have helped me if it had been read by a male voice?

I don't know if it has much to do with the voice or if the rambling plot is old-fashioned, or if it is just not written very well (longwinded, hodge-podge of themes from philosophy to simple peasant minds and back to boardingschools)I recommend you read up on what to expect from this novel, or you'll never appreaciate it at all.

It is very much a piece of its age with (heterosexual) marriage the only choice available to a decent person. The protagonists rather naively discover marriage is not all that it's cut out to be. It has little to do with love, because nobody is genuine, authentic and honest really. Everybody is playing a role as appointed to them by society at large.

Fate brings it's own bad luck and its stressors soon make the whole matrimonial construct untennable. All in all, the story basically feels like a vehicle for Forster's hang ups and muddled thoughts on the free spirit.

If you do your background research on the novel, which you are bound to do when you get stuck or bored to tears after an hour of listening already, you will discover that the recurring and outlandish or convenient (shifting) narrative device Forster uses time and again is to get through his characters by bumping them off, very suddenly, quite abruptly, without any preamble or much retrospection, supposedly for some added symbolism here and there but otherwise preventing mainly a boring continuation of their insipid lives, it seems!. It lends an element of surprise, that's a good thing. But it's really uncanny and almost farcical at the same time.

As regards the ending I had to relisten three times, thinking I had skipped something..... One is rather rushed to the end. The very last paragraph is sentimental that's for sure. It plays hommage to the lower-classes with a kind of all's well that end's well, or a contented acquiescence to circumstance as a reward in return for their tendency to tell it like it is. Forster forgives them their coarser natures which does nobody else any favours, to say the least....but get's them "there" better than the more complicated (philosophical and inhibited) people...

The maverick Ansell's sympathy for the fringe character Stephen and his unambivalent antipathy (mysogeny?) for Agnes come to a head at luncheon three quarters through the book. There is little I can say about how these characters relate to eachother without spoiling your read; for the way in which everybody connects, or indeed fails to connect despite formal connections, lies at the very heart of the whole journey (which never ventures very far from their starting points).

"True love means getting real. "It's interesting to note that this is the only Forster book which has not been made into a film. There is probably a very good reason for that. For one thing, it would be too cliche.

Forster had his reasons to get all that is wrong with the straight-lacedness of his time off his chest, and his small oeuvre deserves to be read in its entirety and for that reason (alone) it is a must-read. Possibly one of those books that fare better without the audio. Love it if you can, but it might never read as a realistic work in the 21st Century anymore.

A slog, but enjoyable

An enjoyable, pottering, sometimes sad look at class and gender, but narrator's voice gets annoying.