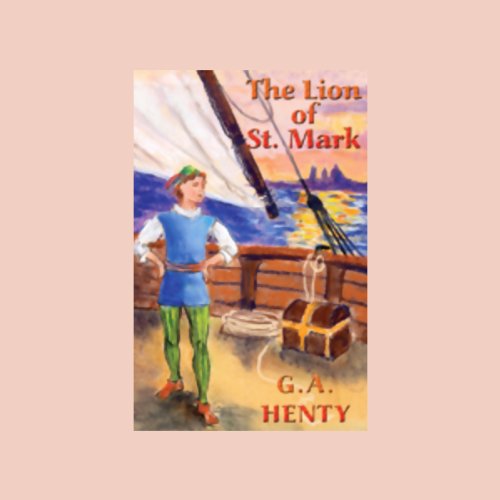 The Lion of St. Mark

Of The Lion of St. Mark, G.A. Henty wrote: "I have laid my story in the time not of the triumphs of Venice but of her hardest struggle for existence, when she defended herself successfully against the coalition of Hungary, Padua, and Genoa, for never at any time were the virtues of Venice, her steadfastness, her patriotism, and her willingness to make all sacrifice for her independence more brilliantly shown. The historical portion of the story is drawn from Hazlitt's History of the Republic of Venice, and with it I have woven the adventures of an English boy endowed with a full share of that energy and pluck which, more than any other qualities, have made the British Empire the greatest the world ever saw."
(P)2002 Blackstone Audiobooks

This was a very good book to listen to - I did not want to turn it off!!! The Adventure with the history made it all the more interesting - although I did need to find a map of Venice to help me picture the different locations.

This historical fiction is captivating and the narration is extremely well done. The narrator successfully gives each character of the story (of which there are many both male and female) a distinct, recognizable, and nuanced voice. The history of Venice at the end of the 14th century comes to life herein.

We loved this book. It was very interesting for a wide span of ages. we couldn't wait to hear more.

I have read 4 Henty books myself and wanted an Audible book to listen to while running. I enjoyed this story a lot. It is not as gripping as "The Carthagian," but it is well told and the story trips a long at a pace that makes listening enjoyable and easy to follow. The geography is pretty simple, the characters are vivid and have easy to remember names. The narrator never gets in the way, but puts forth the story. An invisible reader is what you want when you listen to a book. You'll enjoy it if you like G. A. Henty, "The boys historian!"

I could not turn this one off Great historical fiction!!!!! If you have been to Vencie its a must read.

This is my favorite G.A. Henty

This book was just fun to listen to. The reader was good. The story was full of action. Henty even gave his female characters, who are usually two dimensional, a little depth and spirit. The protagonist was one of the most likeable of any of Henty's books that I have read.

GA henty did it again

Another all-around great romp by Henty! Thank you, Mr. Cosham, for an un-prepossessing yet most capable read!

This reading is amazing! I have listened for 3 hrs! Can't turn it off! Must get! Ralph Cosham fails at female voices but is great with the male voices. I suggest this to teenagers.

reader does a fine job. Does not seem to give very different for various characters. great job