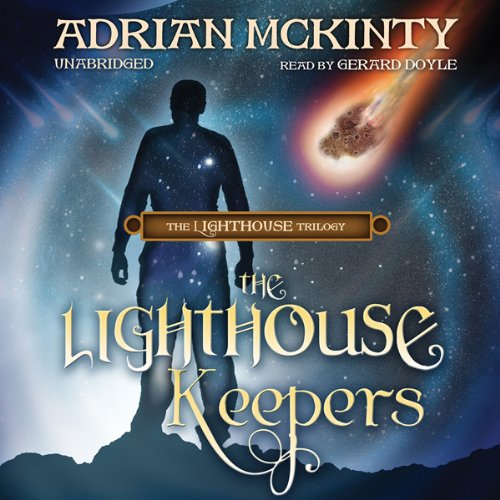 Here is the stunning conclusion to an epic trilogy that Children’s Literature calls “a thought-provoking sci-fi adventure with universal appeal.” The worlds that Adrian McKinty’s characters inhabit are vividly real.

In this final and most ambitious book in a wonderfully inventive trilogy, veteran interplanetary travelers Jamie and Ramsay must protect their alien friend Wishaway, now living with them on Earth, from the scrutiny of sinister forces on their own planet. In the meantime, Wishaway’s beloved home planet of Altair seems to be hurtling toward doom. Just when circumstances on both worlds are at their most dire, members of the ancient race who built the mysterious lighthouses return to offer Jamie a terrible choice. He can save Earth or Altair, but not both. The fate of two planets is in the hands of the teenage Lord Ui Neill. Which home will he save? His own or Wishaway’s?

"The book moves quickly…Psychics, assassins, and the rediscovery of the Salmon of Knowledge provide nonstop adventures." ( VOVA)

Great development of the main characters throughout the trilogy. The first book makes you want to delve right into the next book. As I finished the last book, I found myself hoping there will be another…...

Best of the Series

Had fun with the series but the first 2 were a bit slow at times. This one was more fun, fast moving, and entertaining.

Nice story
Give it a listen. There is some death and sadness involved though so

A little too much war, a little weird in the third book, but still quite fun.

I've been listening to several of Mckinty's other works, which I have been enjoying, too. This story caught me off guard; really different from what I "expected". I was pleasantly surprised. The story line changed-up enough to keep me on my toes. It was a fun listen

The series was great

Great ending to the trilogy!

Adrian McKinty is one of my favourite authors and these three books were a surprising change to his other gritty novels of Ireland and especially Belfast. I also have to give kudos to Gerard Doyle, one of my favourite narrators.
This book was a nice ending to the trilogy! Though there were parts in all three books that made me so frustrated that I was exclaiming out loud about how Jamie can seem to be so dumb. I realize that this must be the authors way of bringing us back to the fact that Jamie and Ramsey are only youths and even though they have amazing insights at times we can’t be expected that they will be at the top of their game for every moment. Very entertaining overall!