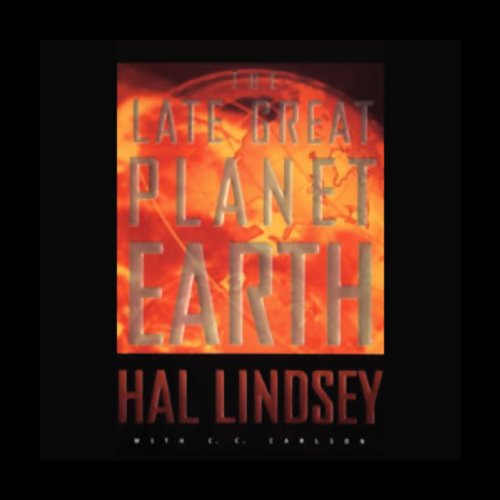 The impact of The Late Great Planet Earth cannot be overstated. The New York Times called it the "number one best-seller of the decade". This blockbuster offered Christians and non-Christians of the 1970s a wake-up call to events to come, and some already unfolding, that herald the return of Jesus Christ.

The years since have confirmed Lindsey's insights into what biblical prophecy says about the times we live in: the rebirth of Israel, the threat of war in the Middle East, an increase in natural catastrophes, the revival of Satanism and witchcraft. These and other signs, foreseen by prophets from Moses to Jesus, portend the coming of an antichrist, of a war which will bring humanity to the brink of destruction, and of incredible deliverance for a desperate, dying planet.

Well i first read this book over 30 years ago. It is a great read and very easy to understand. The original bible prophecy book that spawned all others. If you want to know what the bible says about the future and how it could effect your life this is the book.

Having heard about this book most of my life, I've vowed to read it but never got around to it. Thankfully it showed up as an audible selection and I'm so grateful for that! Now I know why this book is considered a must read, having been written in 1970 and yet it fortells of events that are happening 50 years later. Amazing! There is most definitely a bit of religious bias that I could split hairs over, but I can admire the work whole heartedly and even call it divinely inspired without hesitation. The narrator is clear and easy on the ears. He has a scholarly tone that is well-suited to the subject matter.

scripture based, not fictional or added theories. reveals accurate prophecy, from old to new testament.

Insightful, more relavent today and as time goes on! Biblical predictions explained and how world events are falling into place or may unfold in the future. A Thought-Worthy listen!

An excellent book for prophecies explained

I loved everything about this book! Great Narrator! Will be recommending to friends and family.

A very clear view of God's wonderful vision for our world, His plans and purposes for the planet and for our lives individually.

I had to hear this thru first. Now I will follow along with my Holy Bible and study it further. As a Christian it is good to know physical earthly happenings and be aware of them.

Best book I have ever read!!

WOW!!! What a book it gave me a new outlook on the future and how wonderful it will be ,Praise Jesus

This is a Staggeringly Appalling Book

I think this book qualifies as the most uninformed pile of garbage I have ever read. To be honest, I knew it would be bad going into it given the subject matter but I was still surprised by just how ignorant, anti-semitic and laughable the content would be.

This book has not aged well at all (originally ghost written by Carole C. Carlson in 1970) as its central premise relies heavily on the USSR starting a thermo-nuclear war to bring about the beginning of the end-times which the author suggests would occur sometime in the mid-eighties (subsequent books he "wrote" pushed that date out a few years as each 'end-of-the-world' date passed into history).

Although the authors might like to think this book is somehow scholarly, it is not at all by any stretch of the imagination. The authors present quotes from Redbook and McCalls and questionable personal anecdotes as incontrovertible evidence of the inerrancy of The Book of Revelations. Their interpretations are strained, absurd and occasionally hilarious in their utter stupidity.

References to ancient civilizations and history are, in the most part just wrong. Events are cherry picked from various civilizations to fit the narrative leading to whole swathes of history being criminally mistreated and misrepresented.

The scary thing is, the spurious eschatology of books like this are still considered by many fundamentalists to be relevant.

I read this book when it was first published and was in awe then. Listening to it is even more awe inspiring. It stands the test of time. Outstanding!!!!!