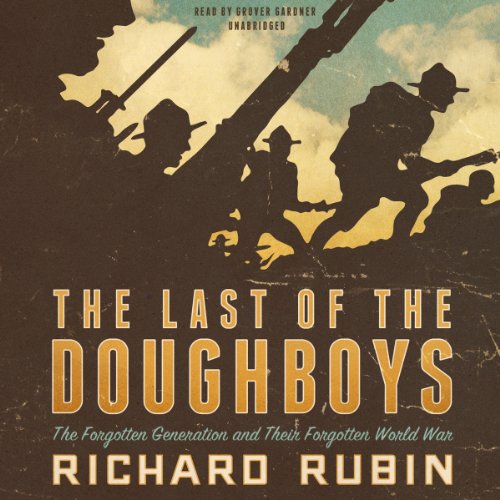 In 2003, eighty-five years after the armistice, it took Richard Rubin months to find just one living American veteran of World War I. But then, he found another. And another. Eventually, he found dozens, aged 101 to 113, and interviewed them. All are gone now.

A decade-long odyssey to recover the story of a forgotten generation and their war led Rubin across the United States and France, through archives, private collections, battlefields, literature, propaganda, and even music. But at the center of it all were the last of the last, the men and women he met: a new immigrant, drafted and sent to France, whose life was saved by a horse; a Connecticut Yankee who volunteered and fought in every major American battle; a Cajun artilleryman nearly killed by a German airplane; an eighteen-year-old Bronx girl "drafted" to work for the War Department; a machine gunner from Montana; a marine wounded at Belleau Wood; the sixteen-year-old who became America’s last World War I veteran; and many more.

They were the final survivors of the millions who made up the American Expeditionary Forces, nineteenth-century men and women living in the twenty-first century. Self-reliant, humble, and stoic, they kept their stories to themselves for a lifetime, then shared them at the last possible moment so that they, and the war they won - the trauma that created our modern world - might at last be remembered. You will never forget them. The Last of the Doughboys is more than simply a war story; it is a moving meditation on character, grace, aging, and memory.

Cosa pensano gli ascoltatori di The Last of the Doughboys

This was a really good book! I've read allot about WWII and of course the American Civil War, but never much about "The Great War". The interviews with the surviving veterans and their stories are amazing. I have always enjoyed listening to older folks and hearing what they have to say, where they've been and how it was in their era. This book fits that bill!

Grover Gardner does an excellent job of communicating the manner in which his interviewees spoke, gestured, thought and lived. His inflection and tone were excellent throughout the entire book.

Richard Rubin has done lots of work in researching this book. He has had to travel all over the country to meet with the veterans for the interviews but the most difficult problem was in finding them. He had to be a detective hunting down the last of the survivors of world war one. This is an engaging book with wonderful tangents such as songs of the conflict; Rubin had gathered sheet music as well as old vinyl records of world war one songs. He also read many memoirs about the conflict. I have on my list to read next, one of the books he went into detail about, “Over the Top “written in 1918 by Arthur Guy Empey. Rubin travel widely employing a keen eye, he made almost a travelogue of World War One monuments and statues. He noted almost every town or city in the country has at least one memorial monument if not more in honor of local people who served in WWI. He also traveled through the WWI cemeteries in Europe also well as monument to the American troops who fought there. Rubin also found African-Americans that had served in the various armed services as well a few women. At the end of the book he discussed the terrible treatment given the veterans of WWI or should say lack of any treatment or service. Apparently the man President Harding appointed to head the Veterans Affairs abscond with millions of dollars he had embezzled. The author also gave some explanations about how the term Doughboy came about. I hope someone will do the same for the WWII veterans before it is too late. If we were on the ball we would be gathering the stories of veterans of all the wars we have fought we are losing so much of our history. I really enjoyed this book; it was at times funny at times serious but always delightful. Grover Gardner did a great job narrating the book.

Brilliant performance of an excellent book.

I cannot say enough about this book. I've been on a bit of a WWI kick, and this book was a nice change from the normal historical narrative. It lends a human perspective to the War, but it's as much a book about the present and how we think about the Great War as much as it is about the Great War itself. Grover Gardner is absolutely BRILLIANT - he does different voices for each person in a subtle way, and even conveys the emotion in the voices of those who are relating their stories.

You should download this book. It is everything a non-fiction audiobook should be.

Memories of an age long past, and its Great War!

I really love the concept of this book. Memories from the WWI era told by the men and women who created them over 8 decades ago. First hand accounts of not only the war, but the times they lived in and the things they found important to remember. Reaching 100 years of age in itself is a rare enough accomplishment but to think of the things they went through to get there is amazing. I am really glad that Richard Rubin was able to take the time to coax the stories from some of the final few that remained before all passed away and the style and stories were lost forever.

Grover Gardner was the perfect choice to narrate this book. His easygoing style made the book seem conversational as if he was relating his experience directly to me.

I am really glad to have found this book. It was good to hear about their experiences, good and bad, told in their unique style and frame of reference. I think this is a book I will be able to enjoy again and again.

I enjoyed listening to the Audible more than reading this fine book. Honestly, this is probably the best listening experience I've had. The reader is phenomenal. Wonderful. The book is amazingly good. It really weaves around a lot of subjects; but it is never confusing. It did seem to sidetrack at times. Man am I glad I stuck with it. I feel I now know an entire generation of people. War is hell! Life is a mixture of hell and well... life.

If you could sum up The Last of the Doughboys in three words, what would they be?

What was one of the most memorable moments of The Last of the Doughboys?

The whole of Woody's life is intriguing beyond words. In fact his experience in World War Two is even more dramatic and entertaining than his Great War experience.

In my humble opinion this book is best broken into a number of sessions, though I hated to shut it off.

Although ostensibly this is a story about the Great War in reality said book covers in detail, though never tediously so, what life and people were like during this period of time. It was quite interesting to me to be able to glimpse into habits and customs of men and woman during the period of 1900 all the way to present day. It is amazing to look at how much the world has changed.

Flawed But Worthwhile: History Buffs Should Get It

This book is good most of the time but bad in spots. So are most books I read or listen to—so little offense, Mr. Rubin. If aged WWI veterans don’t say much Rubin mortars history between his blocks of interviews, and the format works pretty well. Or, he inserts interesting observations from personal tours of battlefields in France, in places specific to interviewees. Rubin became friends with the oldsters, going back to visit them every so often, an endearing thing. Grover Gardner narrates the reminiscences well, as always. The book is enjoyable until Rubin quotes lyrics from his WWI sheet music collection. Tin Pan Alley cranked out terrible stuff. Hear a few verses and you won’t want to hear more. And so, if you buy the book, listen to some of the lyrics then skip ahead because it doesn’t get any better until the chapter ends. Rubin writes that he has hundreds of examples in his collection and I guess he wanted to make use of a fair number of them—but yeeeech. Another quick criticism to an otherwise decent book: Being from the East Coast with its philosophical predilections, Rubin defines racism contemporaneously and then condemns it like it happened yesterday, rather than placing it in its particular historical context. For example, he takes a century-old comic novelty song from Vaudeville—“Indianola”—and, with the narrator reading it dead-pan, makes it sound like the KKK wrote it last week. (For an enjoyable couple of minutes listen to the old Billy Murray rendition of “Indianola” on the Internet. It’s fun.) Context? Picture a guy on stage in a loud plaid suit, carrying a cane, “selling” the song on the yokel circuit somewhere in the sticks, in 1918, at eight o’clock in the evening, on a Tuesday, and you have but one historical context for “Indianola.” Ethnic humor was everywhere at the time. That guy on the stage could have been just about any color or extraction, by the way, including Native American if one of them wanted to troop the boards. Using contemporary rules of measure, “K-K-K-Katie” might be condemned as offensive to both stutters and hillbillies. Oops! I mean vocally challenged folk and chronically under-employed rural laborers. I wonder what Rubin would say about Bill Mauldin’s WWII cartoon of an Indian on guard duty stopping a freight train because he was told not to let anything pass? Rubin needed an editor to put his or her foot down in a few spots.
Taken all-in-all, the book is worth the money if you skip the gas-bag parts. Most of it is well-written and interesting. The diversity of centenarian doughboys (and one doughgirl office worker) is unexpected. And God bless these old guys’ hearts—which have all now ceased beating.

I really liked the approach the author took to the book. He managed to save a number of wonderful stories by taking the time to interview the last of the doughboys. Fascinating details and of life in 1917-1918 and more. My grandfather was attached to the 20th Engineers when he served in the Europe in WW1. I enjoyed the details.

this book was a good listen, I learned tons, could have used less songs.

"The Last of the Doughboys" is one of a kind. Richard Rubin did a most amazing thing in interviewing WWI veterans in the way that he did, and then presenting it in narrative form. This truly was the forgotten generation and their forgotten war. Thank goodness over the years WWI has gotten more press and notice, but still it's not enough. What they did can't be quantified. It's the stories, the names, and their experiences that draw the reader in. And Rubin is able to draw them all together, and create a collective quilt of stories that somehow patch together in spite of their differences. So it's not about individual battles or specific things like that, more about the collective experiences. The most amazing thing is how old many of these veterans lived to be. What an incredible work. Grover Gardner is the perfect narrator for this work. He just couldn't be better in everything he does.