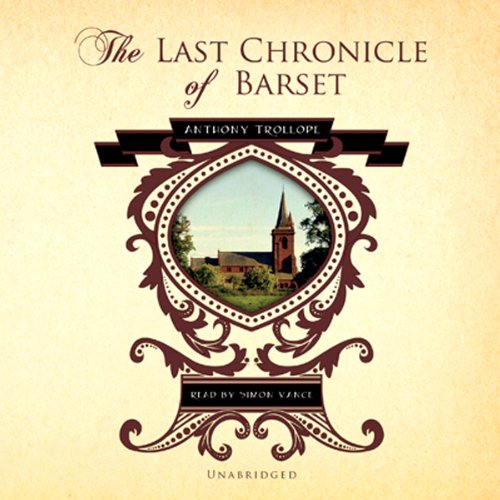 The Last Chronicle of Barset

This last novel in the Chronicles of Barsetshire series involves Mr. Crawley, the impoverished curate of Hogglestock, who is accused of theft when he uses a large check to pay off his debts. The scandal fiercely divides the citizens of Barsetshire and threatens to tear apart Mr. Crawley's family.

Simon Vance brings the characters so vividly to life that you will begin to feel as if you know them as well as you do your friends and neighbors. The Last Chronicle is a vivid portrait of personality, written with great humor and compassion and a very compelling listening experience. I cannot recommend this book highly enough, except that one suffers withdrawal symptoms after finishing it! The narration and the writing are among the best I have ever encountered and I have been an avid reader for decades. My teenaged son also got very engrossed in the Audible version - the book has value for a wide variety of readers.

Simon Vance performs a truly amazing narration of one of Trollope's best books. Vance gives to each character a distinctive voice; none is campy or too affected, and each is appropriate to the character. Highly recommended.

As with all the other Barsetshire novels, Simon Vance made these stories passionate, suspenseful and more delicious than any group of novels I have read in years. I am now a really big SImon Vance fan and I am waiting for him to read Trollope's Palliser novels next! If you have any affection for mid-Victorian literature you are missing a treat if you don't hear Simon Vance's Barsetshire Chronicles.

I just want to reiterate what others have already said: Simon Vance is a great reader, and these Trollope novels are a real treat. Trollope is a crafty writer, giving all the appearance of just dashing off whatever he "remembers" about the incidents of the current tale while all the time weaving together a very satisfying and well-constructed narrative that feels as much like reality as you could like. He is only concerned with the doings of the gentry class for the most part, but they have enough troubles and cares within their insular world to make the telling of it interesting -- and they talk so beautifully! You Jane Austen fans could do a lot worse than Trollope if you are looking for someone to feed your need for good, clever, intelligent prose.

“It is my first experience of Trollope… I'm now in the enviable position of exploring the rest of this series, although in reverse order.” –Valerie, Heath, OH

I feel Valerie’s pain; I’ve done the same thing with other series. But you don’t have to. The most satisfying way to experience the Last Chronicle is to start with the first chronicle—the Warden—and then to work your way through the intervening four novels. “Work” is a misleading word, because it implies, well…work. Instead, these books are a sheer pleasure, all the more so because of Simon Vance’s flawless performances. And that pleasure increases exponentially if, by the time you reach this volume, you know Septimus Harding’s backstory, how the good Doctor Thorne ended up where he is now, or the history of the war between Archdeacon Grantly and Barchester’s bishop (and his wife, the real power behind the episcopal throne).

As long as I started by quoting a fellow reviewer, I think I’ll continue; Joseph and Valerie and Charles bring up points I wanted to make, expressing them as well, if not better than I could:

“Trollope is a crafty writer, giving all the appearance of just dashing off whatever he ‘remembers’ about the incidents of the current tale while all the time weaving together a very satisfying and well-constructed narrative that feels as much like reality as you could like.” –Joseph, South Bend, IN

“…it was very enjoyable and made me laugh out loud, even though there were a few characters needing a whack upside the head...” –Valerie, Heath, OH

“I cannot recommend this book highly enough, except that one suffers withdrawal symptoms after finishing it!” -Charles

I especially endorse this last observation.

If, like me, you’re daunted by a massive cast of characters and a web of familial relations, the Trollope Society has a handy rundown of everything. Unfortunately, while these lists are more complete than Wikidepia’s, like Wikipedia they give away the plot, describing characters not just by their relationship to each other—what I need to be reminded of every now and then—but also who they marry, if they die and when, etc. Still, if you need them, they’re there.

The only thing I’d add is what I’ve said in other reviews of Trollope. He has a refreshingly candid view of the characters he creates. John Eames, for example, while an estimable young man, has his weaknesses and is a hero, if indeed he is a hero, only by chance. Doctor Thorne, though probably the most gifted—or at least human—physician in Barsetshire, is no genius on the brink of a groundbreaking medical discovery. And Adolphus Crosbie, though far weaker and more self-centered than John Eames, is no supervillain. It all adds to that feeling of reality, of life as we actually live it day-to-day, that Joseph was talking about.

I love Trollope and loved all the Barset novels. I read most of this on the page and listened to some while driving. The novel feels a little more repetitive than the others and, especially at the beginning, overstuffed with characters, some dropping in from the previous books accompanied by info about their past exploits. Even so, the central stories are wonderful, the characters richly described, and the entire novel filled with Trollope's psychological complexity and deep compassion for his characters. Probably not great if you haven't first read the others in the series. Small House is still my favorite. Simon Vance is always excellent.

i am sad to be at the end of this series. i have loved each book. in this last book my favorite is Arch Deacon Grantley. i have been moved to tears by his character. this book wraps up the entire series well!

Trollope's observations of a Victorian Cleric

The narrator is fabulous. The story of Mr. Crawley never fails to interest me.

While it does tie up loose ends….. it’s an extremely long and not entirely satisfying read. Depressing would be the best word to describe it.

Beautiful ending to a great epic

The reader did justice to the work, and I don't think there can be any higher praise.
The author's closing was extremely moving to me, and I am very thankful for Anthony Trollope.

Mainly competent but still with voice choices that go against the novel. Mrs Crawley should not have contorted vowels that place her a social class below her husband given that Trollope repeats again and again that she is a lady, born to gentility and comfort, brought to poverty and hardship only by the eccentric approach to life of her husband and bad luck. And whilst she is entitled to be depressed, the subservient whine he gives her irritates rather than inducing sympathy. Similarly, Grace, supposedly the best educated girl in Barsetshire, whose quality shines forth to everyone who meets her, should not speak more sloppily than other non-wealthy clerical family aspirants to county respectability. We might think (I do) that accent should not indicate worth, but that is not what the Victorians thought, not the novel that Trollope wrote, and crucially, not Simon Vance's general interpretation, with many of his voices apparently taken from the 1950's Redgrave/Edith Evans 'Importance of being Earnest'. He also gives Mark Robarts a completely different voice from the one he had in 'Framley Parsonage'. I've stuck with it because there is no British alternative, and listening to books I know is the best substitute I can find for now impossible bedtime reading. If you don't know the novels the mainly competent readings may not annoy you. If you do, or if you simply listen closely to what Trollope says, you may, like me, put up with it only for want of an alternative British reader more attentive to the text.