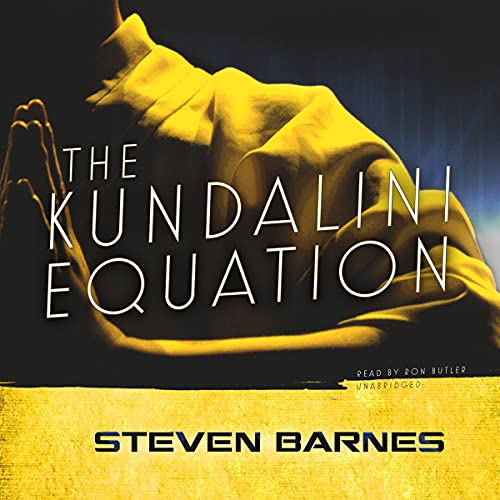 The coauthor of Beowulf’s Children strikes out on his own with this novel of mystic revelation and martial arts.

What if the disciplines we know as the martial arts, meditation, and fasting were mere fragments of a greater, more powerful killing art?

What if that hidden discipline could produce in a man the power to manipulate matter and energy at will?

What if the effect on the mind were so deadly that, uncontrolled, the result would be an inhuman killer?

And what if, unknowingly, a young man in modern-day Los Angeles were to stumble onto the secret, setting in motion The Kundalini Equation?

©1986 Steven Barnes (P)2013 Blackstone Audio, Inc.
“Barnes gives us characters that are vividly real people, conceived with insight and portrayed with compassion and rare skill - and then he stokes the suspense up to levels that will make the reader miss sleep and be late for work.” (Tim Powers, World Fantasy Award-winning author)

Very good read! This would make a great movie. Loved the action, the science and the metaphysical aspects. I want to know more of the ancient civilization that first discovered this power.

I liked the characters and I loved the details in the Los Angeles cityscape. Characters a wee bit flat and simple but that’s ok. It was a fun story with exciting twists.

I tried to finish because I don’t like to leave without a closing. I did without this time. And you would thank me if you Nvr started.
Other than than the narrator this was painful.

A book from my childhood revisited

Too slow. The idea is great but the plot does not move as quickly as it should. I got bored.