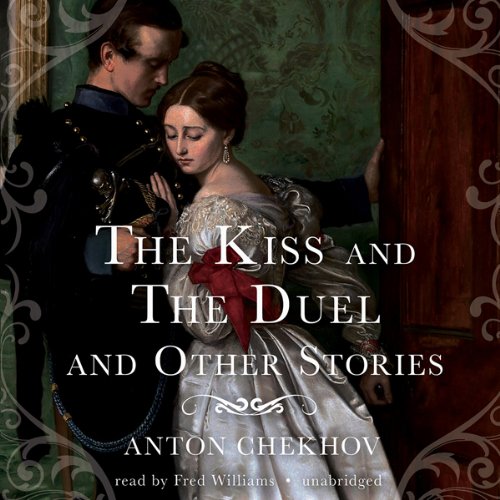 The Kiss and The Duel and Other Stories

Here is the greatest novella and the most unforgettable stories of a master writer who saw all of life and rejected none of it.

In “The Kiss”, a lonely, love-starved soldier keeps a secret rendezvous for another man and becomes enamored with a woman he is never to see again. “The Duel” describes the collisions between men and women in hopeless relationships, and how two men are driven to settle the score in a clandestine meeting on a bridge, pistols in hand. In all of these stories, Chekhov’s brilliant portrayal of people from all walks of life and how they deal with the moral dilemmas their circumstances press upon them comes to vivid life in the listener’s mind.

"I love to hear the truth"

Anton Chekhov's The Kiss and the Duel and Other Stories translated by Constance Garnett (1916-1923) is an excellent collection. Each story features a crisis in some human relationship: between strangers in "The Kiss" (1887), when a bespectacled, lynx-whiskered, milquetoast army officer is mistakenly kissed by an unknown woman in a dark room at a tea party; enemies in "The Duel" (1891) when a coldly superior botanist challenges a lazy, spoiled, and amoral intellectual official to a duel; brother and sister in "Excellent People" (1886), when a listless sister who has always worshiped her wannabe literary figure brother begins asking him about the principle of non-resistance to evil; dupes and vamp in "Mire" (1886), when a younger cousin and his older cousin take turns visiting a cynical and mercurial Jewess who owes one of them money; brother, sister, and friend in "Neighbours" (1892), when a young country gentleman rides to confront his beloved sister and the idealistic and pathetic married man she's run away to live with; and royal and subject in "The Princess" (1889), when a spoiled princess who believes she's an angel dispensing light and joy to humanity asks a doctor she's fired to tell her the truth about her mistakes.

To explain the crisis and prepare for the climax of each story, Chekhov dispassionately and sympathetically cores the human soul. His insights into the human heart and mind are accurate, humorous, and devastating. He excels at placing people out of their depths in intolerable situations, so that if they manage to swim back to shore it's a heroic feat. At the same time, he concisely depicts Russian culture near the end of the 19th century, complete with growing conflicts between different classes, cultures, regions, philosophies, and so on.

Interestingly, Chekhov's stories, no matter how bleak, give me intense pleasure, and make me feel more alive. How does he do it? It must be his irony and empathy, keen eye for observation, and original mind for metaphors. Whenever his characters resolve to righteously take someone to task and then find themselves instead wimpishly appeasing the person, I think, Ah, that's me! The best we can hope to achieve, it seems, is coming to understand, as one character says near the end of "The Duel," "No one knows where the real truth lies." That and trying to treat people with humanity and kindness.

Fred Williams gives a solid reading of the stories. He doesn't dramatically change his voice for different characters, unlike virtuoso actor-readers, but he reads every word clearly and every sentence with appropriate rhythm and emphasis, and he enhances the text with appropriate wit and emotion. And I really like his deliberate, deep, and slightly gravelly and nasal voice. The only difficult point about the audiobook lay in my unfamiliarity with Russian names, so that, especially in the novella "The Duel," I sometimes mixed the characters up in my mind when listening. So I'd recommend getting a text version of the story (many free ones are online) and reading the character names in it once or twice so as to be able to hear their differences more readily.

You have to love lines like this from "Neighbours":

"It's a charming house altogether," she went on, sitting down opposite her brother. "There's some pleasant memory in every room. In my room, only fancy, Grigory's grandfather shot himself."

And it's a testament to Chekhov's genius that of the conclusions of the last two stories in the collection, the self-realization of the first nearly makes a happy ending, while the self-delusion of the second surely makes an unhappy one:

"From Koltovitch's copse and garden there came a strong fragrant scent of lilies of the valley and honey-laden flowers. Pyotr Mihalitch rode along the bank of the pond and looked mournfully into the water. And thinking about his life, he came to the conclusion he had never said or acted upon what he really thought, and other people had repaid him in the same way. And so the whole of life seemed to him as dark as this water in which the night sky was reflected and water-weeds grew in a tangle. And it seemed to him that nothing could ever set it right." (from "Neighbours")

Trying to look like a bird, the princess fluttered into the carriage and nodded in all directions. There was a gay, warm, serene feeling in her heart, and she felt herself that her smile was particularly soft and friendly. As the carriage rolled towards the gates, and afterwards along the dusty road past huts and gardens, past long trains of waggons and strings of pilgrims on their way to the monastery, she still screwed up her eyes and smiled softly. She was thinking there was no higher bliss than to bring warmth, light, and joy wherever one went, to forgive injuries, to smile graciously on one's enemies. The peasants she passed bowed to her, the carriage rustled softly, clouds of dust rose from under the wheels and floated over the golden rye, and it seemed to the princess that her body was swaying not on carriage cushions but on clouds, and that she herself was like a light, transparent little cloud. . . .

With simple words and and simple storylines there is such magnificence and brilliance; there is magic in Chekhov's writing. Where Tolstoy was complex and so serious--Chekhov is lighter and even humorous, pointing out the foibles in our characters, our human tendencies to manipulate morality to fit our desires. Short stories that are easy to get through and so very worth any reader's time.

Would you try another book from Anton Chekhov and/or Fred Williams?

Absolutely, I would do more Chekhov—and I have. By far—and by miles, in fact—the best Chekhov audiobook currently available is "In The Ravine" read by Kenneth Brannagh. Head and shoulders above the next best, which is "About Love" read by a bunch of other people whose names I can't recall right now. And that one's really good, too. But only Brannagh captures the nuance, despair, beauty and yes even the humor of Chekhov. At the other end of the spectrum from the sublime awesomeness of Brannagh's read, however, is this—Fred Williams' read of "The Kiss..." It's not only machine-like, lifeless and rote... It's intonations are so... just "wrong" that the reading utterly squelches the humor and insight of the work, to be sure, but makes it almost impossible to simply follow the basic plot. This has to be the absolute worst audiobook I've ever had—and I have hundreds. I've tried this at least 10 different times. Same result every time: "Delete from device."

What was one of the most memorable moments of The Kiss and The Duel and Other Stories?

The only thing I remember is being frustrated. He intones or endows every single sentence, no matter what's happening in it, with the exact same emotion and delivery.

Who would you have cast as narrator instead of Fred Williams?

I would pay almost any amount to have Kenneth Brannagh read every Chekhov short story. Simon Vance has done it with all the Sherlock Holmes stories, so has Stephen Fry. Brannagh reading all the Chekhov stories would be an incredible treasury. Audible, please think about this.

If you could play editor, what scene or scenes would you have cut from The Kiss and The Duel and Other Stories?

I would cut the scene in which we see the producers of this audiobook in a casting meeting where they're trying to decide who should do the VO. In this scene, one of the producers argues that Fred Williams should be the reader for the project and, reluctantly, all the other people involved in the decision eventually consent. I would cut that scene right out. It fcked everything else that came after it right up.

Sparsity is a Strength

I have never favored the short story form much in my time. But Checkov is masterful with them and is one author to return to several times. He really strikes a wonderful balance, and knows when to stop. He does not play the story out the way a novel would, following a character until you wish you were dead, if not the character. These mostly end leaving you hanging, and every last line is intimately perfect. Characters develop more in the space of 30 minutes of listening than they do in many large, long books. These stories are like a reduction of broth. What remains in the pot after simmering is very strong. "The Kiss" is famous and deservedly so. "The Duel" tracks a handful of intriguing characters. There really are no weak stories. I wish a volume were available that covered more of Checkov's work, but this was the best collection available when I looked. Narration is a bit wooden and the sound quality is more muffled or fuzzy than many modern productions, but that is actually why I picked it. I go through a lot of audio books at my job and one gets tired of perfect voices enunciating carefully. This is not a reader with a "radio" voice, but he fits most of the stories and does an adequate to excellent job with each of them. Can't really read women parts though. I'll blame the timbre of his voice on that- they just sound like raspy soft men.

I tried to read Anton Chehkov as a teenager,did not like it, did not understand it. I know now that to understand and enjoy Chehkov you need emotional maturity, understanding of the human nature. Chekhov is a master painter of the inner workings of souls. I really enjoyed this listen, and planning to move on to his complete works.

What disappointed you about The Kiss and The Duel and Other Stories?

I was looking forward to enjoying these classic stories, but I should have listened to the sample first. The narrator "tried" at times to give the characters different voices, but not consistently or well. I finally had to stop listening.

If you’ve listened to books by Anton Chekhov before, how does this one compare?

This was my first Anton Chekhov

Would you be willing to try another one of Fred Williams’s performances?

Would you try another book from Anton Chekhov and/or Fred Williams?

No I do not want to read or listen to anything else by Anton Chekhov. Fred Williams has a boring voice, he sounds like he is reading history texts.

No, it is not a sterling example of anything.

Has The Kiss and The Duel and Other Stories turned you off from other books in this genre?

No, it reminds me that great authors also have works that are not necessarily worth reading or translating. These stories are simply too dated and were probably translated with only marginal success.

Would you be willing to try another one of Fred Williams’s performances?

Did The Kiss and The Duel and Other Stories inspire you to do anything?