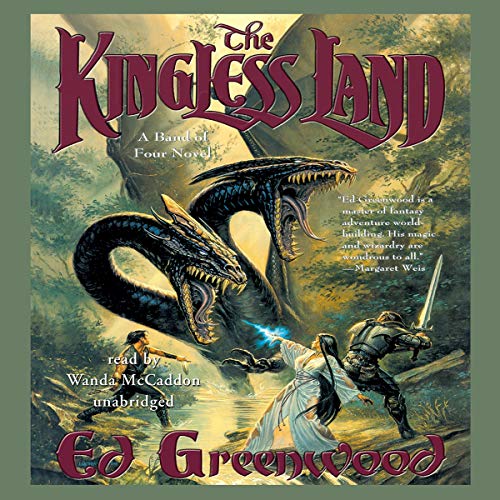 Aglirta is known as the Kingless Land. Once prosperous and peaceful, it has now fallen into lawlessness, studded with feuding baronies engaged in a constant state of war. The only hope for peace lies in the legend of the Sleeping King, destined to rise and restore peace when the Dwaerindim stones are recovered.

Lady Embra Silvertree is the sorceress daughter of a bellicose baron with an eye towards world domination. She has been imprisoned by her father, who hopes to use her as a magical battery to fortify his castle. When a pair of good natured rogues attempt to steal one of her jewel encrusted gowns, they are quickly enlisted as allies to help her escape and, with the aid of a shape-shifting cleric, to seek out the Dwaerindim.

A few issues place this one firmly at "average".

"The Kingless Land" is a fantasy book from an older mindset and storytelling style. It's use of language very traditional to the point of being overdone and the plot points within it equally so.
It's not a "bad" story by any means, but there are a few audio editing choices and writing quarks that put enough of a damper on the audiobook experience to keep it at the "average" mark.

First off, the pacing is awkward. If a listener is trying to multitask at all while listening to this, then they might find themselves rewinding a few times because they are taken off guard by a sudden unannounced jump to other character perspectives or scenes from a character's past.  These transitions are harsh, occurring mid action scene or, in one noticeable occasion, mid sentence.

Secondly,  the narrator's audio work is all over the place. Wanda McCaddon has a pleasant enough voice, but there are random pauses that were not edited out and mess with the pacing even further. She also seems to have a bit of trouble with the range of character voices that this book seems to need. To many characters sound the same for a story that jumps around this much.

As an audiobook experience this book is recommended to listeners with a lot of patience for simpler and older fantasy adventure themes. Those looking for something with more modern language, twists, or sense of humor might want to pass on this one until it's on sale.

Awkward Paused and a Good Story

Narrator would periodically pause for just long enough for me to think my app had crashed.

I never thought such a small thing could make it impossible to listen to an audiobook. the pauses between sentences are too long to the point that you think something may have interrupted the playback.
Sometimes it happens mid scene and the length of the pause is random and disproportionate.
I gave up after a few chapters...

the story was a great one and the delivery from the narrator was sensational, and just added to the story. some parts where hard to follow, but with a quick rewind I could make sense of what was said.

I was able to get through 3 chapters... I don't think I'm have ever stopped reading a book but this was horrible. The narrator has pauses constantly and in weird places. Not small pauses, long ones... long enough where you start thinking about something else and completely lose context of what is happening in the story.

Audible really needs to check on their publishers and ensure they are putting out decent product.

What was with the narrator

It was really hard to follow the book because the narrator didn’t do a very good job from differentiating between two different characters it would pause awkwardly too often so you thought the chapter ended or the story was over.

So much happened and then again, nothing at all happened that much. Every character just seemed so flat and all the things I wanted described in detail weren't. I felt that this is a wast.

A good idea, but

The idea is good, as is the plot, but too many names for an audiobook which made the listening, for me, fragmented.