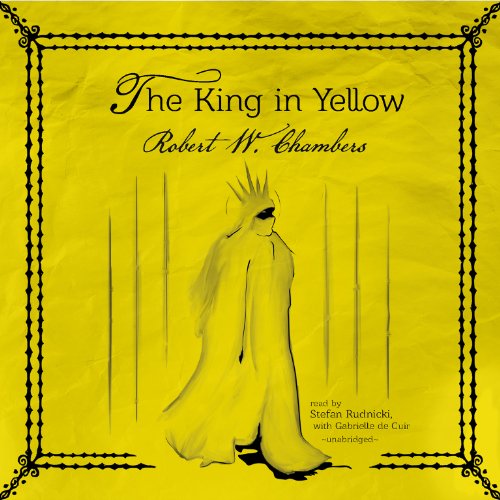 Originally published in 1895, Robert W. Chambers' The King in Yellow is a marvel of supernatural fiction that has influenced a number of writers in the genre, most notably H. P. Lovecraft. Its powerful combination of horror and lyrical prose has made it a classic, a masterpiece of weird fiction that endures to this day.

There is a book that is shrouded in mystery. Some even say it's a myth. Within its pages is a play - one that brings madness and despair to all who read it. It is the play of the King in Yellow, and it will haunt you for the rest of your days.

The King in Yellow is a collection of stories interwoven loosely by the elements of the play, including the central figure himself.

Robert W. Chambers is primarily famous for his supernatural horror stories, collectively known as the Carcossa mythos or Yellow mythos. These incredibly creepy stories were favorites of later horror authors like H. P. Lovecraft, who actually incorporated them directly into his own Cthulhu mythos. Also, Chamber's most famous horror creation, the titular King in Yellow, has recently been resurrected in True Detective.

First of all, this is a recording of the original 1895 edition of the King in Yellow. That edition didn't contain the complete Carcossa mythos since Chambers hadn't written it yet. And as many have already noted, only around the first half of this edition contains Chambers' horror stories. Around the last three hours, the stories shift from supernatural horror to love stories set in Paris. This isn't necessarily a bad thing, but just know what you're buying.

Also, while I really enjoyed Stefan Rudnicki's very deep, baritone voice it may turn some off. Best listen to the sample first. With all that said, I'd ultimately recommend this as worth a credit. Enjoy!

Would you listen to The King in Yellow again? Why?

I've listened twice and probably will again. Each story is so bizarre and sometimes confusing that I love trying to figure it out each time.

What other book might you compare The King in Yellow to and why?

I have no idea.

What does Stefan Rudnicki and Gabrielle de Cuir bring to the story that you wouldn’t experience if you just read the book?

Stefan Rudnicki's voice is absolutely wonderful to listen to. In an almost punny way, his voice brings a great depth to the stories.

Who was the most memorable character of The King in Yellow and why?

I think I most enjoyed the character, who's name I unfortunately have forgotten, who gets lost in the moor and is saved by the young girl with the bird.

The first two stories were very engaging. I quite enjoyed them. They kept to the cosmic horror theme so prevalent in H.P. Lovecraft stories. However, the last few stories were more akin to grocery store romance novels. It kind of ruined the mood and overall feel of the book as a whole.

The series of short stories is great but has an odd mix of genres. From the dark to romantic.

great narration and the story is engaging. lovecraft is difficult to follow in general. I like the audio version.

A tale of two books

What disappointed you about The King in Yellow?

The complete shift of story type in the second half. The first half of the book is a series of macabre short stories in the vein of Poe, but then the second half turns into a series of pointless romantic blathering about American artists in Paris' Latin Quarter at the close of the 19th century. I kept waiting for the stories to take a turn but they just continued to prattle on about pots of pansies and the inane interactions between the artists and their various crushes.

Would you be willing to try another one of Stefan Rudnicki and Gabrielle de Cuir ’s performances?

Rudnicki's monotone performance with little distinction between characters means I am unlikely to listen to something by him again. Gabrielle de Cuir only performed the occasional snippet of poetry at the beginning of a story. Basically a non-entity.

Disappointment. The actual stories around the fictional play of the King in Yellow were intriguing, but the rest was a waste of time

A Terrifying, Yet Essential Read

The King in Yellow is truly terrifying. This is how you write cosmic horror. This collection of short stories is extremely pervasive and will permeate every fabric of your mind. “Carcossa” and “The King in Yellow” will replay in your brain like a parasitic thought. This is absolutely essential for any horror fan, or an admirer of the first season of True Detective.

This book was mentioned in another book I was reading. The creep factor of going mad from reading the book is what brought me to it and it really delivers on pure creep.

An interesting addition to its genre

I found that this novel certainly inspired many which came after. My only complaint would be the last couple of stories; the first few were excellent and chilling, though the last ones were just love stories and I fail to see the relevance they have to the king in yellow. Maybe I just haven’t gotten it yet but the ending was disappointing.

Interesting ideas, solid writing, great performances. The thematic link between the short stories can at times feel repetitive, but the dark tone and flowery love are mixed well.

Fizzles out early on

Somebody who was around at the time it came out.
I once read that a classic is a work that has stood the test of time. Based on that, The King in Yellow is not a classic.

What could Robert W. Chambers have done to make this a more enjoyable book for you?

To be fair it wasn't really his fault. He wrote a series of short stories that presumably worked at the time, and which influenced the likes of Lovecraft.
Then again, the fact that he completely dropped the King in Yellow thread less than halfway through the book of that title meant we were left with a handful of vaguely similar stories about American artists slumming it in Paris.

Did Stefan Rudnicki and Gabrielle de Cuir do a good job differentiating each of the characters? How?

That was not their purpose. He read the stories; she read the poems that preceded each story. They were okay but nothing special.

Initially I was intrigued by the hints about the titular king, but of course it never went anywhere, and so I got bored. A shame, as I'd read the relevant Ambrose Bierce fiction to enable me to immerse myself in the whole thing.
The American bohemians in the last half spend their time having squabbles and falling in love with young women in a way that I think is supposed to elicit our disapproval, but which is in fact incredibly tame in comparison with the social and sexual mores of today. The stories are unfocused - it is often unclear whom we are supposed to care about - so that they are not even interesting in a "so that's how things were in 1895" sort of way.
Now, I'm relieved I've got it out the way. I can probably buy and enjoy True Detective, feeling I'm "in the know".

The Repairer of Reputations seems to get a lot of praise. I found it a very dull opener, and I had to listen twice because I thought I'd missed something. I don't think I did. I was amused that this future America (1920!) had something similar to the suicide booths in Futurama.
The Mask is my favourite - a straight SF/fantasy story based on a neat idea.
In The Court of the Dragon. A nebulous supernatural story, the second in the collection that I had to relisten to.
The Yellow Sign. Quite effectively creepy.
The Demoiselle d'Ys. A pleasant enough time travel story, but I've already mostly forgotten it.
The Prophets' Paradise. If you went to art college and spent a few days writing pretentious poems, you'll be familiar with this.
The Street of the Four Winds. Well written, but the sort of thing you might find in a small press magazine.
The Street of the First Shell. Again, this one gets a lot of praise, but I found it hard to keep track of who was who and why I should care. This is another I listened to twice.
The Street of Our Lady of the Fields. Inconsequential flirtations, I think. I can't remember now - it's been nearly a week. Some of the same characters appear in the equally forgettable Rue Barree.

Not exactly a supposed horror masterpiece...

Decided to check this out after reading about how it was a masterpiece of horror that influenced Lovecraft. Went in with high hopes, but ended up being bored toward the end and being unable to finish the last half hour of the book.

It starts off well, a tale of madness that involves the King of Yellow. The first half of the book is relatively intriguing, with the different tales being tied together by the eponymous King and the play in which he features, but this conceit is dropped before the halfway mark, never mentioned again and fails to have any meaningful impact on the collection as a whole. Horror- and sci-fi-tinged stories give way to boring, mundane love tales involving bland, forgettable characters. There is little to tie the unengaging and disparate stories together.

The narrator in this collection, his rumbling bass giving gravitas to the performance and differentiation between characters. However, this does not change the fact that the majority of tales are bland, mediocre love stories.

If you read this collection and know what to expect, it may be more enjoyable. However, its description as a masterpiece of horror literature is unfounded and majorly disappointing if you're expecting a weird and spooky listen.