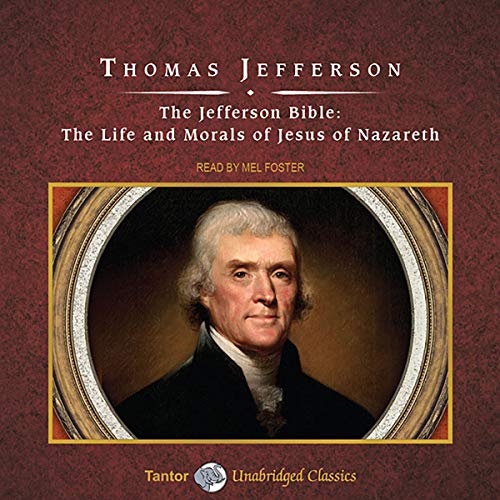 In the early 19th century, Thomas Jefferson, the third president of the United States and the principal author of the Declaration of Independence, conceived the idea of extracting a gospel purified of what he saw as extraneous philosophical, mythological, and theological elements. To do so, he took verses from the four canonical gospels and arranged them into a single narrative, focusing on the actual words of Jesus. This work was never published during Jefferson's lifetime but was inherited by his grandson and printed for the first time in the early 20th century. The original bound manuscript, popularly referred to as The Jefferson Bible, is held by the United States National Museum in Washington.

Although called the Jefferson Bible, the actual title of the book is The Life and Morals of Jesus of Nazareth. It consists solely of quotations Jefferson selected from the the the Christian New Testament books of Matthew, Mark, Luke, and John. The Life and Morals of Jesus of Nazareth was composed by Jefferson in four volumes - one each in Latin, Greek, French, and English with The English version being literally cut from the King James Version and pasted onto sheets of blank paper - approximately a decade after he left the US presidency (he was president from 1801 - 1809). It was first released by his grandson in 1895 and was published by the US government in 1904. The original is in one of the Smithsonian museums in Washington DC.

The content of the Jefferson Bible along with his letters gives us a clear view of Jefferson's religious beliefs. He was most definitely a theist, ie, he believed in God, specifically the Jewish God. He likely believed in an afterlife and the possibility of hell. He believed in the teachings of Jesus but disbelieved his divinity. The Jefferson Bible excludes the virgin birth, the son of God claims, all miracles, the resurrection, and most supernatural events claimed in Gospels. Yet, it is safe to speculate that Jefferson strongly believed Jesus had a special relationship with God AND that his teachings on morality superseded and replaced all prior religious texts including the Jewish Bible.

Jefferson further believed that the rest of the New Testament and all religious beliefs coming from them including the Catholic and mainline Protestant churches were false. They were done in his view for self aggrandizement of the people and groups who wrote or began them.

Note that Jefferson specifically included references in the Gospels to and quotes from Jesus of hell, angels, and prophets.

Rating the Jefferson Bible on Audible is difficult for me. My decision is to rate it as a historical document rather than a religious one because I am not qualified to rate it based on content.

I liked it. Just the man's story.

What I liked about this book, was that Jefferson kept to telling what Mathew, Mark, Luke, and John said about Jesus. A kind of "sticking to just the fact" type of book. No mystification of the man, just what events took place in his life his as per these four disciples, and what Jesus actually was said to have said. As Jefferson put it, a look at Christianity based on Jesus's teachings, not the pile of other stuff the new testament in full of that came from folks who lived far after Jesus's death.

Helps change your mind about Jefferson's religous beliefs. A man who asks questions of his creator, trying to define his beliefs.

The reader seems to hurry through the material without inspiration or any sense of history or character. Perhaps Mr. Foster was thinking that Mr. Jefferson would have preferred it this way. It makes it all a bit dry. He reads like a fellow who is paid by the word. Great to fall asleep to - (even while driving!)

Everyone should hear this book

An incredible account of Jesus' life unadulterated by the commentary of others. Salvation straight from the holy horses mouth transcribed by the man America trusts the most. A phenomenal work of spiritual philosophy to be read by all seekers.

This wasn't for me personally, but I can't say it was bad because of that. Maybe it's for you.

Thomas Jefferson is NOT a Christian

Long story short, Jefferson ends his version of the Bible of Jesus never resurrecting but being sealed off in His tomb.
He pretty much views Jesus as a universal moral teacher. Jefferson sounds like a Universalist where I would assume he believes all paths lead to God.
He thinks any teaching of Jesus being God in the flesh is a distortion.
Unfortunately for Jefferson, he seems clueless of the Pauline Creed penned around 52AD which gives no time for distortions of Jesus life.

If people only knew

If only more people knew about this, and the true beliefs of our founding fathers! Great read!