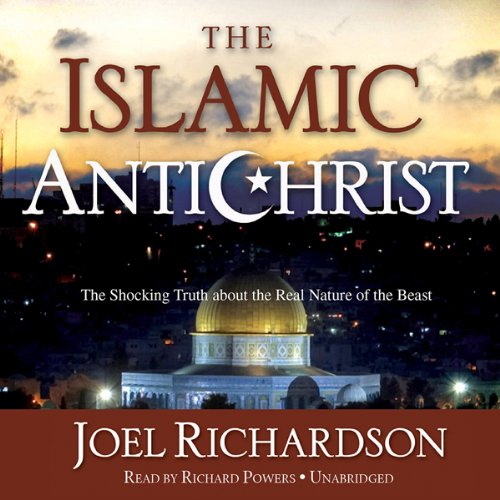 The Bible predicts that in the last days a charismatic leader will establish a global following in the name of peace. The Qur’an also predicts that a man will rise up to lead the nations, pledging to usher in an era of peace. The man in the Qur’an is called the Mahdi, or Islam’s savior. However, the man in the Bible is the Antichrist. Joel Richardson’s stunning research and analysis suggest that the Mahdi and the Antichrist are actually one and the same.

In The Islamic Antichrist, Richardson exposes Western readers to the traditions of Islam and predicts that the end-times may not be far away. His book will stun readers unaware of the similarities between the Antichrist and the “Islamic Jesus.” His research on the relationship between Christian end-time prophecy and Islamic expectations of world domination will shock readers and shape the debate over radical Islam for years to come. This is the book to read on the world’s fastest-growing religion and the future of the world.

NOT a relaxing read

A thought provoking book that lines things up fairly easily. It is NOT a book to read for relaxation, but rather for study. I found myself double checking scripture and taking notes. A good study book.

How revealing as to what is happenning with ISIS !

What made the experience of listening to The Islamic Antichrist the most enjoyable?

The most enjoyable part of this book is the careful history that is so well explained.

What other book might you compare The Islamic Antichrist to and why?

Road to Martyrs' Square is a book that is somewhat comparable, but frankly I have not found a book like this that focuses on the epidemiology of Islam and Christianity and the prophetic message that predicts this reality.

What does Richard Powers bring to the story that you wouldn’t experience if you just read the book?

Richard Powers was a fine performer. He had very good pronunciation of the Arabic words as far as I could tell.

If you could give The Islamic Antichrist a new subtitle, what would it be?

...And how it explains the ISIS and the New Caliphate that is Spreading Across the Middle East

This book introduces a terrifying truth that is so politically incorrect, but so true.

This Is Not Fairy Tale

To say this book is a frightening read/ listen, is a mild statement.
I wonder how many Christians really know just what Muslims believe and teach.

The author has researched this with all due diligence.

What an eye opener.

Fair, balanced and logical analysis of the topic

Great book. This book is something everyone should read. It helps demonstrate the fact of just how accurate the Bible is to life right now in the world. The topic is handled well by the author without sensationalism or hype. If only more authors would write in a manner like this - literature and the topics they cover would be the better for it.

This book is FULL of detailed information with references about the Islamic and Christian faiths! If you don't want to be deceived by men, get the FACTS straight NOW! I wish everyone would read this before it's too late.
This book tells you WHY your Jesus is NOT the same man as Their Jesus.

Learn what you never will from MSM

What did you love best about The Islamic Antichrist?

Very informative and well researched. A difficult subject made easy to understand and relate to today's world.

PERFECTION - Every Christian Must read NOW!!!!!

Where does The Islamic Antichrist rank among all the audiobooks you’ve listened to so far?

This is concise - well researched - and On the MARK - This hit the news today 1/26/2015 after Saudi Prince Abdulah died this weekend:
“[A] man named Abdullah comes to the power. Whoever informs me of his death, I will inform him of the rise [of Mahdi].”
— Mohammed, the Prophet of Islam

Islam teaches that 2 great Muslim leaders will soon arise, (1) the Madhi, who will lead an army of 10 Arab nations (carrying black flags), to conquer the world for Islam, and (2) the returning Islamic Jesus.
Islamic Jesus will be re-born near Damascus and will claim himself Muslim. (Unlike Christian Jesus who will come in the clouds). Islamic Jesus will tell the world that the Crucifixion never happened, and will perform miracles on behalf of the Madhi. They will destroy the world economy, create a drought and famine on the earth. Islam teaches, the pair will then make a 7 year treaty with Israel and Rome. After 3.5 years the Madhi invades Israel, and will set his throne on the temple mount. Their army will carry the ‘black flags’ when he begins his world conquest. Islam teaches they will change the world calendar to the Islamic calendar. Islamic Jesus will then kill all swine on earth, and begin to pull all crosses off churches – converting Christians at sword point. Islam teaches he will next battle a Jewish leader who calls himself The Messiah at the temple mount, and then put all of Israel to the sword. Islam teaches that the trees in Israel (except the broom tree) will cry out to Muslims – see a Jew is hiding behind me, come and kill him. Sound familiar?

Joel Richardson does an excellent job connecting biblical prophecies with places, events, and Islamic teachings in our world in a consistent and coherent manner. He does justice to eschatological and theological matters while presenting a compassionate yet urgent message.
Richard Powers does a great job of presenting the material well with only a handful of minor issues. At a couple of points he is mildly bland, and sometimes his pronunciations are shaky. That being said, he handled the names and material rather masterfully!

Very interesting point of view that I had never come across in my readings on the middle east and Islam. I am a Christian as is the author but found his slamming of Islam a little over the top at times. I have a huge respect for Islam and Muslims alike and although I can see the connections the author makes between the antichrist and the Islam messiah I found it annoying how he kept insisting he wasn't trying to bash Muslims yet kept apologizing for doing that very thing.

Overall a very interesting and compelling listen but there is a clear message he is sending to Christians and Jews...watch out for the terrible Muslims.

Interesting introduction to the theory

Where does The Islamic Antichrist rank among all the audiobooks you’ve listened to so far?

Would have liked more time spent on the Islamic views on the end times. Most of that was covered early on in the book

I would have enjoyed this book but found it very difficult to listen too.
The constant pronouncing of the word Muslim as Mooslim by the narrator was for me unbearable.