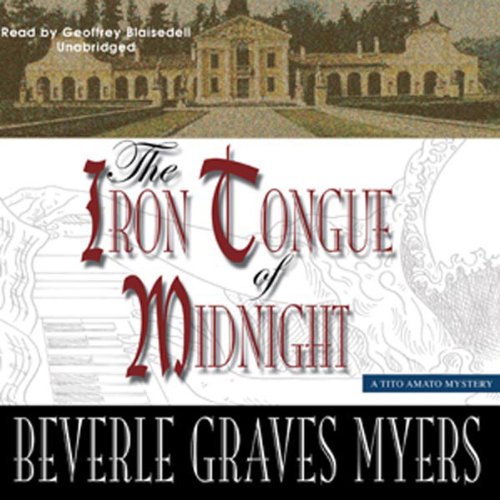 The Iron Tongue of Midnight

In September 1740, singer Tito Amato is offered the lead role in an opera being staged at an isolated villa in the Italian hills. Puzzled by the air of secrecy that enshrouds the production but attracted by a generous fee, Tito agrees.

The countryside is awash with the golden hues of autumn, but the bucolic mood quickly turns menacing when a notorious figure from Tito's past turns up at the villa. That night, at the stroke of 12, a soprano stumbles over a stranger who has been beaten to death with the clock pendulum.

With the local constable away on a boar hunt, the midnight murderer strikes with impunity, raising terror to a fevered crescendo. Tito must pursue his own quest for answers, a quest that leads straight into the painful secrets of his heart and beyond.

and delightful! I wasn't prepared to enjoy these books as much as I have. They seem a bit "overwrought" at first but one gets into the "groove" after an hour or so. This is the second of Tito's adventures for me. I enjoy them very much. After I'm done I am almost surprised I've not heard Tito singing gloriously up to the angels. Good story, well written, dealing with Venice which hasn't been done to death. I loved it!

This should have been great!

From the synopsis I expected "The Iron Tongue" to be exactly the kind of historical mystery tale that I most enjoy. Sadly however, the narrator's voice and the author's prose combined in a way that just couldn't hold my attention. I kept losing track of the characters and the plot, and eventually just gave up. Try some Roberta Gellis or Martin Stephen instead.