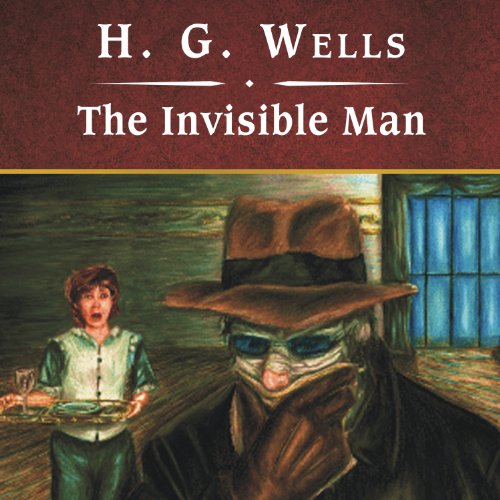 Once a brilliant scientist, Griffin has been gradually consumed by his research. When he finally achieves his goal, the final result is his departure from humanity. He feels no remorse in using his invisibility to gratify his increasing desires. As he gradually loses his mind, it is hard to determine if it is a result of his chemical concoction, or just a continuation of his moral decline.

At a time when science fiction was depicting what wonders the future would bring, H.G. Wells was one of the first writers to explore the dark side of science and portray how easily mortal man could be corrupted when tempted by seemingly unlimited power.

When a bandage-swathed stranger books a room in an English village inn, no one realizes this is the beginning of a reign of terror. It's not long before they do! For the Invisible Man is dwelling under that roof, and he is one angry, irascible, and frustrated scientist with little patience for humanity. It may be he was antisocial to begin with, but his invisibility, and the danger and delight it brings him, push him to the brink of madness. Masterfully portrayed by Scott Brick - each of his characterizations is an actorly tour de force - the title character fascinates and mesmerizes, until it's gone.

I turned to the audio book, though I also had the hardcopy because I wanted to get a more in tuned reading of the story. Scott Brick, the narrator was excellent! He read so vividly and CLEARLY, that I registered parts of the story that had earlier just glazed through my mind. I sincerely attribute the effectiveness of this audiobook to the narrator.
I will be browsing for other books narrated by Scott Brick from this day forth. Thumbs up for sure!

What a story and how H.G. Wells weaves you into each chapter!
I wonder if those 3 books ever got found out !

While I was familiar with the story, having seen the film and listened to audio dramas based on this book, I had not read the actual book until now. BY Wells' classic tale of an evil man who discovered the secret of invisibility, his reign of terror and retribution are still a great story. I read this book using immersion reading while listening to the audiobook. The great Scott Brick masterfully narrated this tale in a beautiful British accent. The book has added scenes of filler, which are normally left out of the adaptations. I would love to see a modern production, faithful to the book. Once it gets going after a bit of slowness in the beginning, it is fast paced and exciting. The Invisible Man is often his own worst enemy, due to his temper, vanity and greed. Glad to check this classic off my list.