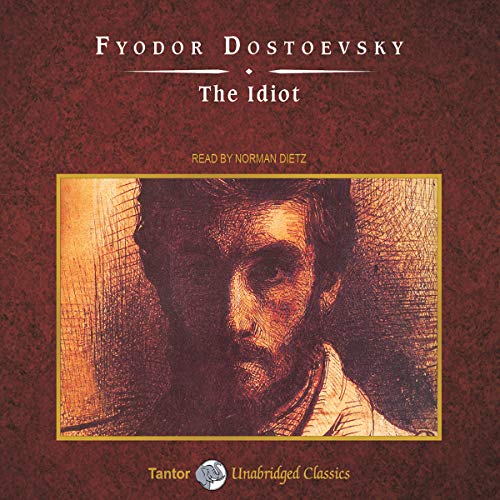 Just two years after completing Crime and Punishment, which explored the mind of a murderer, Fyodor Dostoevsky produced another masterpiece: The Idiot. This time the author portrays a truly beautiful soul and one of Dostoevsky's greatest characters---Prince Muishkin, a saintly, Christ-like, yet deeply human figure. The story begins when Muishkin arrives on Russian soil after a stay in a Swiss sanatorium. Scorned by St. Petersburg society as an idiot for his generosity and innocence, the prince finds himself at the center of a struggle between a rich, kept woman and a beautiful, virtuous girl, who both hope to win his affection. Unfortunately, Muishkin's very goodness seems to bring disaster to everyone he meets. The shocking denouement tragically reveals how, in a world obsessed with money, power, and sexual conquest, a sanatorium is the only place for a saint. This version of The Idiot is the translation by Eva Martin.

What could have made this a 4 or 5-star listening experience for you? Norman Deitz ruined this great book for me. He attempts to change his voice depending on who's speaking, with miserable results. Dostoevsky doesn't even require voice acting to be incredible. I couldn't get into this version at all (which I've read myself in the past and loved--hence the 5 stars for "Story"), couldn't last more than 15 minutes in fact, all because of the narrator. I wish I could get my money back or get another version of the same title. What didn’t you like about Norman Dietz’s performance? See above.

Not a light novel, but certainly worthwhile

Doetoevsky's writing is heavy on long conversational pieces which he uses to flesh out his characters' beliefs. This method of using long -pages long, in fact , half expository, half debate, quotations seems to be fairly common in novels from the nineteenth century and, if you like that style, then this book should please you. This type of writing can certainly be boring to a more action oriented person but, if you can look at these screeds as little windows into the characters and into Dostoevky's Russia, you will find many worthwhile gems in this book. The interplay between the characters is interesting from a psychological and a religious perspective. I found myself rooting for the Prince, for example, because he is such a sweet character, yet it is this same sweetness that causes him much needless trouble and pain. The similarities between Myshkin and Jesus are obvious and have been commented on by better analysts than myself. However, I believe that the theme of how a truly good person would fare in the "modern" world is an interesting question that the novel explores. Doestoevsky's answer and the climax of "The Idiot" is not the most personally satisfying one for me because I like the main character, but it is certainly logical and believable and gives the story depth and believability. It is certainly a commentary on what we say is good and right in others, verses what we act on, and believe, is good for ourselves

Also, the narrator is outstanding. I am looking for more of his work and will likely purchase at least one more book simply to listen to him voice the characters. I truly think he is one of the greatest readers I have ever heard.

A Beautiful and Yet -- Ultimately a Flawed Novel

At once 'The Idiot' is a complicated, beautiful and yet ultimately a somewhat flawed novel. Written shortly after 'Crime and Punishment', it seems like Dostoevsky wanted to invert Raskolnikov. Instead of a mad killer, Prince Myshkin the 'Idiot' is an innocent saint, a positive, a beautiful soul and holy fool motivated by helping those around him. He is a Christ in an un-Christian world, a tortured Don Quixote.

Dostoevsky is able to use Prince Myshkin's spiritual intelligence and Rogozhin's passion to illuminate the main problems and idocyncrasies of Russian society. But the story still falls a bit short of perfection. It literally falls between 'Crime and Punishment' and 'Brothers Karamazov'; failing to achieve the simple greatness of 'Crime and Punishment' and the complex greatness of 'Brothers Karamazov'. Like Myshkin himself, the novel's intent is nearly perfect, but the execution is just a little off, a little unstable. That doesnt mean I didn't love it. As a novel I adored it. I was both taken by and frustrated with Prince Myshkin.

Perhaps my favorite parts of this novel fall into the scenes where Dostoevsky is focused on a painting or an execution. He isn't content with a superficial look at the world. He examines things for depth and poignance that actually left me shaking. He studies Holbein's grotesque 'The Body of the Dead Christ in the Tomb' with a patient, detailed eye that at once appears to capture the whole life and death of Christ. He describes the beheading of John the Baptist; looking for details of his face in that still and eternal second before his execution. In this Dostoevesky is recreating his own near execution and the horror and magnificence that death (or a near death in Dostoevsky's case) brings to a person's fragile, beautiful and flawed life.

I got about halfway through the book until I gave up on it. The narrator is what ruined the story for me due to his delivery and the specific voices he gives to characters. All of the women's voices were performed as if they were airheads with the voice of Snow White, and the protagonist is performed with an annoyingly infantile and unconfident demeanor that is exaggerated more than it should be. I realize the protagonist is characterized as an idiot but the narrator takes too much liberty and goes too far.

it's a Russian soap opera. how has it survived?

I finished it as a test of endurance. A kind of workout for my attention span. It is plotless meandering peppered with occasional interesting passages. Dostoevsky's characters violate my suspension of disbelief to the extent
that I wonder if he ever met an actual human being. It's as though he is guessing what drives people to do things and how they will react to situations based on a two week study of humanity. And how the man drones on and on and on. Shut. Up. Already.

Dostoevsky's characters are confused and confusing, because they have no national identity to relate to. They aren't even hypocrites, because they haven't the motivation to be. Yet they contradict themselves from one moment to the next, even to the extent that they love one minute and hate the same person the next. Politically, morally, and socially, they "try on for size" any idea that they whiff in the breeze. When a problem needs solving, they grapple at ineffectual, fanciful, childish solutions, much like some of Chekhov's ineffectual characters. In The Idiot, characterization isn't simply a matter of good-versus-evil, a theme Dostoevsky is famous for mastering, but it is a matter of depicting a crisis in the Russian mind or education. Many characters in this novel make Mrs. Bennett in Pride and Prejudice seem like a superb intellect.

Approaching the novel with this orientation certainly helps readers to appreciate the masterful characterization. Norman Dietz's narration is great. The moment I began to listen to him, I knew this was a good choice.

Now that i reflect on the story, I am reminded that the Prince has been educated outside of Russia, as are many characters in all of Russian literature. In fact, English, French, and German universities were favorite choices for the sons of Russians with money, a fact that tied their experiences to other European cultures--and confused their own with a smattering of foreign words and ideas. Think of it! What use had a Russian for the ramblings of Rousseau? Voltaire? Madame Pompadour? Yet Dostoevsky's characters are fond of quoting "Apres moi me deluge," a fatalistic expectation--if they get the sense of it. Dostoevsky did.

terrifying and sad at the end, this is classic dostoyevsky and one of his great novels.

This is the first review I have written. I have been a member since 2006 and this is the first book I just could not finish listening to. It was long and drawn out with no direction. I'm not even sure what the story is about, it seemed like just high tale gossip. It was much to boring for me.

The Idiot - an American Version

A strange, very American translation, but if you don't mind the characters being referred to as "in a funk" etc., you might enjoy this. From all the narrators I listened to, I'd say this is the best one, but, again, the strong American accent got in the way for me.
I listened to it straight after having listened to Constantine Gregory's rendition of The Brothers Karamazov - and neither the story nor the rendition hold up a candle to The Idiot, a bit disappointing, but still worthwhile.