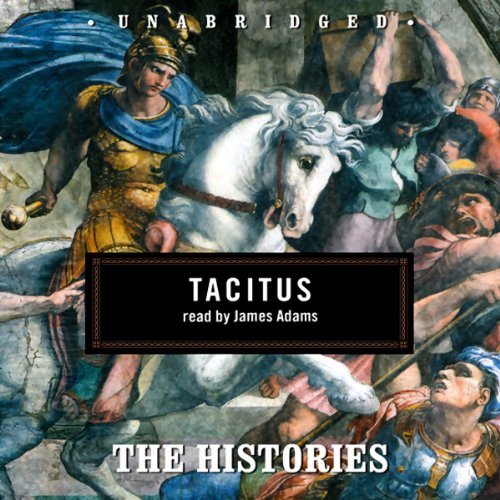 This superbly written, highly listenable account of the tumult of A.D. 69 focuses on the four men who sought imperial power in the void left by Nero: an old man, a soldier, a playboy, and an extravagant debaucher. The empire-wide, year-long civil war that resulted is brought to life in this sustained narrative, which is rich in detail, intrigue, and insight, as well as the aristocratic biases of the author. Though part of the original work is lost, even thousands of years later this account is a gripping masterwork.
Public Domain (P)2008 Blackstone Audio, Inc.

Warning this is not the complete History

I just downloaded the History, so can't comment on the narration yet. Just wanted to warn potential buyers that this is NOT the complete book, but only part two of the complete recording. This download starts with Book 3.

Either Tacitus was a better writer than Josephus or he has been better translated. He has some odd ideas about the Jews - he regards one of their obnoxious customs as “not even killing their later-born children”! However, other “barbarians” are sometimes described as noble or courageous, and he avoids the gossipy accounts of debauchery so beloved by Suetonius. Sadly, the end of the book is lost, which would have told of the end of the Jewish War, Masada, and the Destruction of the Temple.