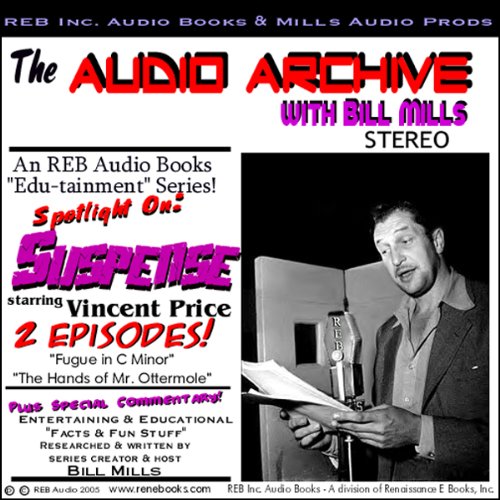 The Hands of Mr. Ottermole & Fugue in C Minor

The mellifluous Price is matched against two other actors famed for their roles in crime and horror films, the talented and engaging actress Ida Lupino (Moontide) in the first petrifying program, and the brilliantly arch Claude Rains (The Invisible Man) in the second. Both episodes of Suspense also feature the original commercials that were broadcast with the show.

Adding to the all-star line-up, in the first episode, the announcer and spokesman for Roma Wine is Truman Bradley, who would later be host of television's Science Fiction Theater in the mid-50s.

The second episode features the vocal talent of Paul Frees as the host/announcer of Suspense, who will be familiar to many listeners for his work in films and in cartoons (in which he was the voice of literally hundreds of famous characters), and to others as the "Ghost Host" - the narrator of Disneyland's Haunted Mansion attraction.

This program was two episodes of a classic radio show called Suspense and included some extra content to further enhance the shows. Please note that both shows include commercials. Kind of jarring to be caught up in the story, which stops for ads from the sponsor. Annoying. The other editions found on Audible don’t have commercials. Vincent Price is wonderful in both.