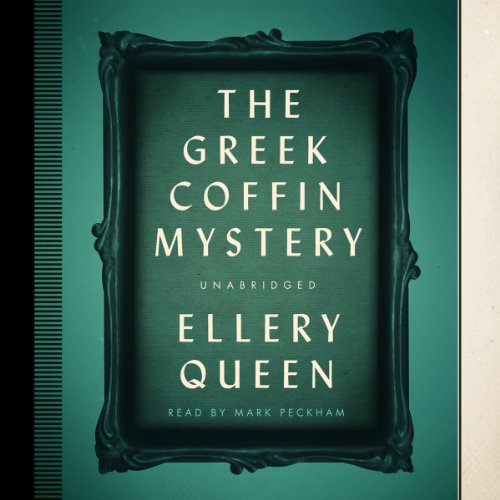 In one of his earliest cases, Ellery Queen confronts a murder in blue blood. From the very beginning, the Khalkis case struck a somber note. It began, as was peculiarly harmonious in the light of what was to come, with the death of an old man. Georg Khalkis, internationally famous art dealer and collector, died of heart failure. After his funeral, his attorney found that the will was missing and immediately called in the district attorney.

When Inspector Queen and his son, Ellery, are brought in to solve the mystery, Ellery mentions the one place they have not searched for the will: the coffin. Upon exhumation of the Khalkis coffin, they find that it contains not one body - but two!

The end is anti climax. Takes too long to tell even the simplest of plot lines. Narration of EQ is somewhat at odds to his character in this and other books. Not my fave EQ book.

A puzzler from Queen

In this entry, Ellery is involved in a will case, where the deceased is exhumed, only to find another body added to the coffin! Lots of false clues here, and we get some classic Queen &quot;false&quot; solutions. The explanation of the crime is wordy, but probably necessary, due to the involved nature of the mystery. Trying to figure this one out will likely give you a headache.

Ellery Queen is one of the giants of American Detective fiction, but it's hard to tell from this over-written mess. Over-written is an understatement. The plot is a mess with several unexplained lapses in it (for example, how was the will stolen). Compounding this is the authors' inability to explain the action clearly. So convoluted is the writing and smothered by lavender prose that it is practically impossible to tell what is going on. Did I mention overwritten?

The plot is a weak variation of Hammett's brilliant "Dain Curse," and as they say in the mystery game, is not strictly "fair". Ellery withholds from the reader and, in fact, perpetrates a lie on the reader, so the reader's inability to solve the mystery is more a testimony to muddy writing and obfuscation than plotting genius.

And for fans' of the legendary TV show, Jim Hutton is the best thing to happen to Ellery Queen. The Ellery of this novel is not the absent-minded mystery of the later novels and TV show. This Ellery is such an insufferable dilettante I kept hoping he would be the next victim.

The narration doesn't help. Bad and poorly distinguished voices (I couldn't tell the difference between the District Attorney's voice and Inspector Queens) and a sickening penchant for drooling over each and every word of the prose made this 13 hour audiobook seem like 1300 hours.

Early days of US mystery writing.

The dialogue is dated. Written about 90 years ago and it shows. But the story is strong. Classic whodunit.

I finished the book and am glad this was included with my membership (meaning I didn't have to pay extra for it). I vaguely remember Ellery Queen from TV, so it was a no brainer to read the source material. The TV series only lasted for one season -- that should have been a clue. The book is dated as the speech patterns are no longer used. It does go thru a lot of twists and turns, takes way too long to get to the resolution, and has no character development. I can't call this a classic, just a bore.

Not one of his best

A decent story but at the beginning but the number of twists and turns was not required for this story. The authors tried too hard to disguise a solution making it a little too complex and genes fictional.

Derogatory, offensive language used frequently to portray a man of limited intelligence.
Also, I listened to the first Ellery Queen novel, “The Roman Hat.” That narrator was much better. This narrator makes all the cops sound like ignorant, old-times gangsters. Ellery’s voice sounds like he’s a snooty, condescending oaf.

This is an enjoyable listen if you take it on knowing that the prejudices of an earlier time are embedded in it and that the author was likely paid by the word. Listening to the audible version at 1.25 or 1.30 will make it more enjoyable. It's a good plot, if over-involved.

Ugh, finally made it to the end. Talk, talk, talk, virtually no action and not much description of the characters nor of the surroundings.

As with all Ellery Queen stories be prepared for many red herrings and an overly complicated plot. By the time I got to the end I had forgotten several of the earlier characters and rationale . The performance was ok but often the lead voice drifted including a disconcerting puzzled Roger Moore tone. Think ill try something simpler next time- maybe a le Carre or AS Byatt.

Delightfully broad and rich use of vocabulary, creating images and sounds that surprise and satisfy the listener beyond expectations. The plot as usual is complex and twisting to the end.