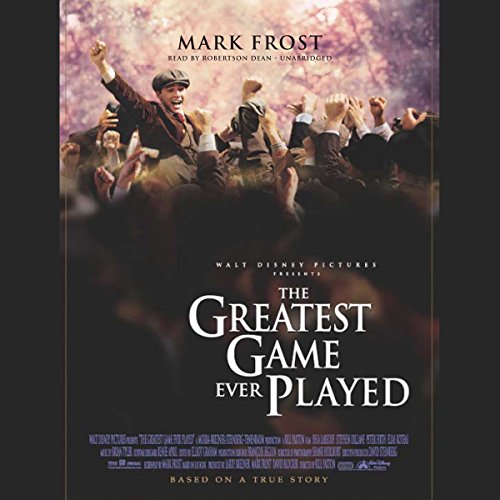 Francis Ouimet and Harry Vardon came from different worlds and different generations, but their passion for golf set them on parallel paths that would collide in the greatest match their sport had ever known.

A young Massachusetts native, Francis was only three years removed from his youthful career as a lowly caddie. Harry was twice his age, the greatest British champion in history, and innovator of the modern grip and swing. Through exacting hard work, perseverance, and determination, Harry Vardon had escaped a hopeless life of poverty; the unknown Ouimet dared to dream of following in his hero's footsteps. When the two men finally came together in their legendary battle at the 1913 US Open, its heart-stopping climax gave rise to the sport of golf as we know it today.

Weaving the stories of Ouimet and Vardon as his narrative, Mark Frost creates a uniquely involving, intimate epic that is equal parts sports biography, sweeping social history, and emotional human drama. The Greatest Game Ever Played is a must-listen for millions of sports and history fans - and all who have ever dared to reach for their dreams.

As in most cases this book is way way better than the movie.. great history of golf with a story thrown in.. fantastic..

One of the Greatest Golf Stories ever writen

My all time favorite golf film is the one based on this book and this story blows away the movie. Along with The Match (also written by Mark Frost), The Greatest Game Ever Played are by far two of my favorite books ever read or listened to.

If you're a golfer and/or love the game, this book will take you back to a different era of the sport to a time of some of that generations greatest sportsman and ambassadors.

The book is enthralling, captivating, and has not one dull moment. I highly suggest listening to this exquisitely told story of Francis Ouimet and Harry Vardon and everything that lead up to and after the 1913 US Open.

I would listen to this book on my daily walks and felt the great emotion of this historic event. The book covers great detail of the scores and shots made and missed. Provides great feelings towards the competitors. The summary chapter is awesome as you hear of how each of the golfers continued their careers and feelings of love towards golf.

Either if you play golf or you haver never heard a word about it, this book is fascinating. The story is detailed and exciting. The narration is perfect, specially considering this is not a 2hr book, but you'll enjoy every chapter in it.

Must read for golfers.

Very good movie but doesn't hold a candle to the book. Very thorough with every player

Not a golf fan, but really enjoyed the MOVIE....

...Which in my humble opinion is (a rarity) better. Not to say this isn’t a solid 4 stars but I found it somewhat confusing and - a little bit tedious - and I often found myself drifting. But that the nature of watching golf, right? In any event, not bad. But the Movie is better.

A must read for any golf lover

This book is about the journey through the history of golf in the US, backed with great information for people who wants to know more about the American early golfers. The story of one of the most relevant golfers in America Francis Ouimet and one of the most greatest players of all times, the master from Jersey island, Harry Vardon. I strongly recommend you to hear it, it’s just fantastic true story and the narrative of Mark Frost the author is superb! It took a while for me to get used to the velvety voice of the narrator but after a couple of chapters I couldn’t imagine anyone else reading besides Robertson Dean, it was just a perfect fit! Enjoy.

Who would have thought listening to a play by play commentary on golf would be interesting? Kudos to the author for managing to accomplish what sounds impossible. Excellent book!!

Better with Every Listen!

Mark Frost is one of the finest sports writers. Period. His ability to blend the action with the unique back stories of each character is nothing short of masterful. Robertson Dean's narration conveys a love for the game, a love for its history, and a love for its important characters. This is my fourth listen, and it only gets better!

Far superior to the silly Disney movie, this is a brilliant book. Note to the reader though, its Carnoustie, not Carnoutsie.

Really enjoyed the background stories on Vardon, Ray and Ouimet. If you enjoy golf books , I'd highly recommend.

Loved it. Wonderfully detailed but enthralling and easy to listen to. Recommend this to any student of the great games history.