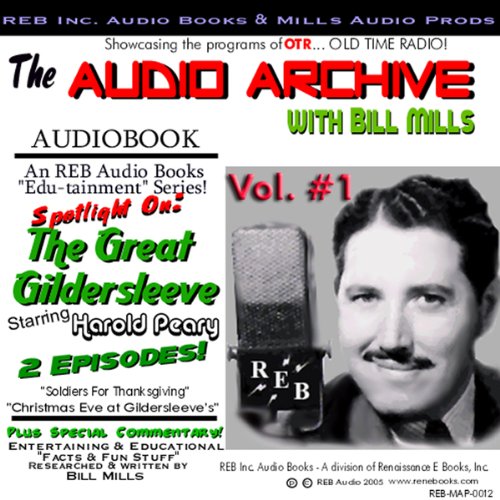 Holiday hilarity and history with the Great Gildersleeve - radio's most lovable windbag! The inimitable Harold Peary, with his melodious baritone voice and trademark warbling laugh, achieved stardom portraying Gildersleeve on the first ever spin-off series in broadcast history!

Here are two hilarious holiday shows, one that captures this beloved character at his best, as well as the anxiety of pre-World War II America, in a 1941 episode ("Soldiers for Thanksgiving") and another that captures the soaring prices and spirits of the post-War era, in a 1948 episode ("Christmas Eve at Gildersleeve's").

In the first show, Summerfield citizens are urged to invite a lonely soldier home for Thanksgiving dinner. With an elaborate meal being prepared at his house, Gildy discovers the town's good citizens have indeed heeded this plea, and there's not a soldier left to be had!

In the second program, Gildy has found himself guardian of an abandoned baby and plans a quiet family celebration that will make the infant's first Christmas "the best ever" - but soon half the town has invited themselves over.

Then the story turns on a dime from comedy to drama, ending with the Great Gildersleeve delivering one of the most touching Christmas speeches since Tiny Tim said, "God bless us every one!"

Here is Golden Age radio at its finest, plus informative commentary about the program and Harold Peary's life and career. Another in the best-selling Audio Archives series from Bill Mills and REB Inc.

Take an adventure back in time to the 1940s radio classic the great Gildersleeve. Listen to two shows one pre-World War II and the second post World War II. Before television pictures the only home entertainment wha’s the radio where you not only had to tell a story but you also had to paint a picture in your mind.

The shows are fun to listen to. Never childish or offensive as so many shows these days seem to be.

What does Harold Peary and Bill Mills bring to the story that you wouldn’t experience if you just read the book?

A natural fit into their roles.

No - they are just fun to listen to..

Entertainment today should look back to these shows and learn what quality is all about. Entertainment without offensive language and stupid storylines.